Our guesthouse in Medan had obvious management issues as it took them an hour to make us a coffee for breakfast. We left there about 9am, one hour later than planned, and hungry. We found an Ojek, a motorbike with side-car, and negotiated on a good price to the bus station 12km away. The side-car was too narrow for our Western backsides, so Chris perched in a cambered position for the journey, half sitting on my hip, half down a small gap. When we arrived at the bus station some 45 minutes later Chris had such bad leg cramps he fell out of the Ojek and couldn't walk for 5 minutes, which was most amusing!

We refused the fervent offers for a 'tourist taxi' a posh minibus, which although obviously more comfortable was three times the price of the local bus. Setting off on the five hour drive to Lake Toba we watched the changing landscape, from cramped towns to acres of paddy fields, rubber tree and palm oil plantations, followed by valleys with paddy fields and then steep slopes, bare but for the occasional pine tree. We'd expected to see some jungle, but that had long gone. As the bus climbed up the volcanic slopes, carp fish farms proliferated at man-made terraced ox-bow lakes next to the gushing fast rivers. The bus frequently stopped and picked up passengers along its journey. To ask the bus to stop the ticket collector did a rat-a-ta-tat on a railing with a bolt suspended by a piece of string. School children climbed aboard and tried out their English with us. Hawkers swarmed the bus at various times selling biscuits, noodles, water and drinks. In Myanmar we were surrounded by fellow passengers spitting betel juice, here in Indonesia everyone preferred to smoke spice filled cigarettes, any time, anywhere.

Reaching Parapat, a town on the side of Lake Toba high up amongst Sumatra's volcanic peaks, we were hit by how much cooler it was compared to the humidity of Medan. Lake Toba, we read, is the deepest and largest lake in SE Asia and the 5th largest lake in the world (I'm not sure how they measure that- I assume total capacity at normal water level? - anyone know?) The lake and island were formed after the eruption of a supervolcano some 75,000 years ago. It reminder me of Lake Windermere, not that I've been there for a while, but I imagine it to have a faded glory about it.

We took a ferry across to Samosir, which is an island-like headland at the north of the lake, isolated except for a slender azimuth of land. Unfortunately the weather was misty so the views across the lake where hindered. Our accommodation, Merylns Guesthouse was right on the waters edge in the village of Tuk Tuk on Samsoir. The couple running the guesthouse were very friendly and welcoming. The guesthouse had hot water and beautifully manicured gardens.

There were only 4 rooms, 2 of which were beautiful traditional Batak houses with small doorways and huge buffalo horn shaped roofs, with giant gable’s ornately carved and painted.

The following day we explored the island on motorbike, the roads where bumpy and often damaged, but there was very little traffic.


A misty Danu Toba, high up in North Sumatra's interior 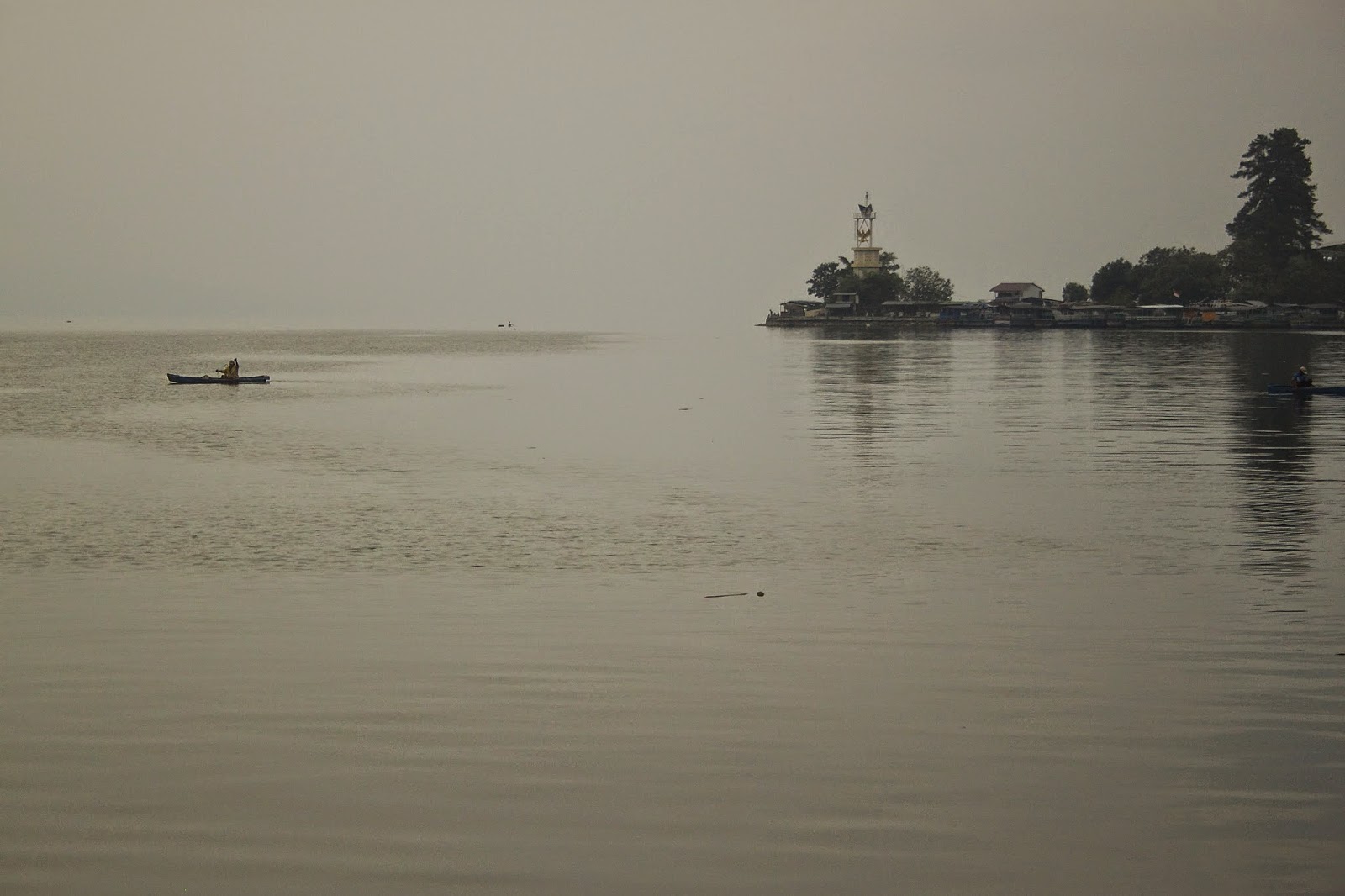 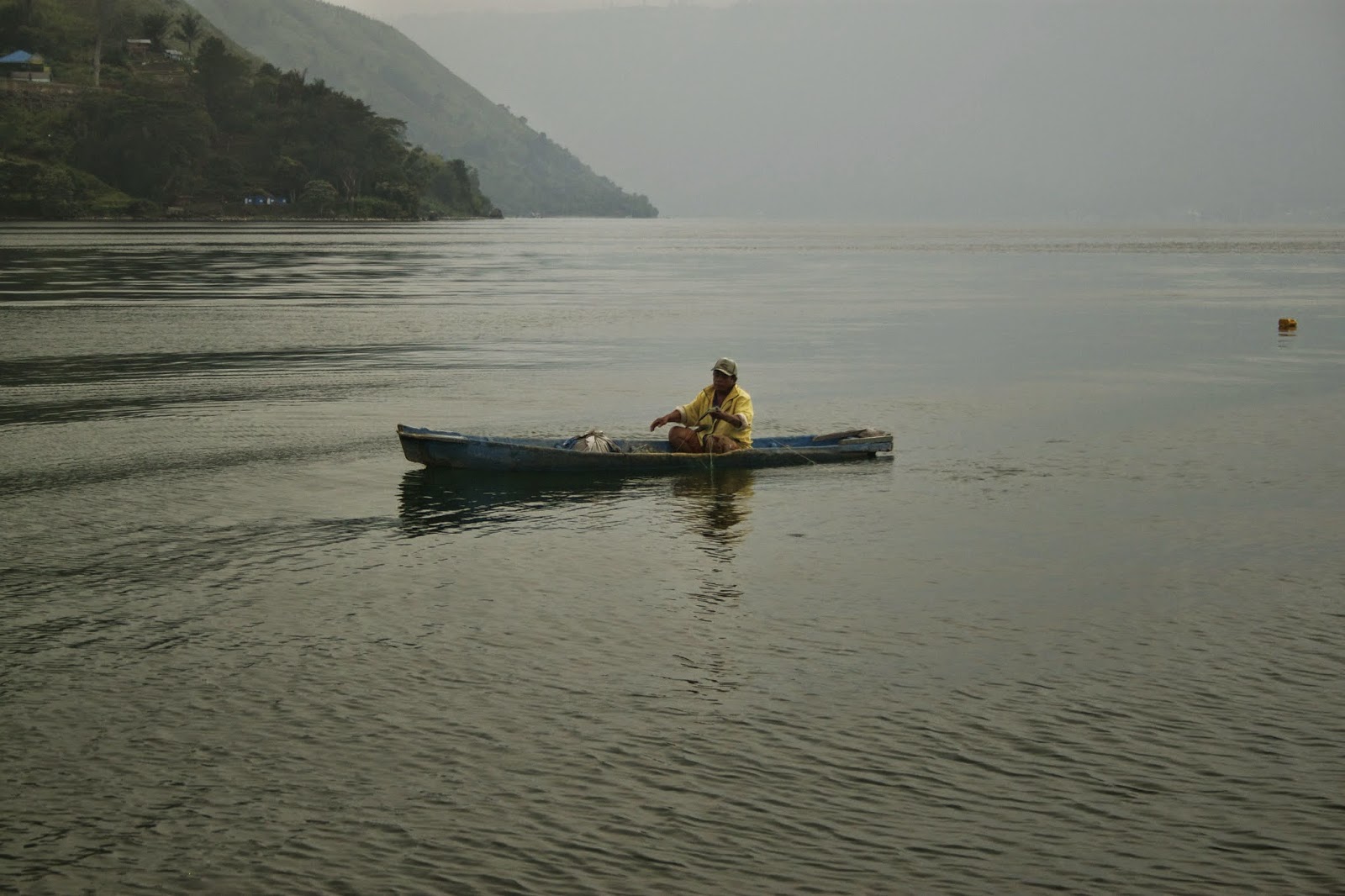 The town of Parapat is popular with holidaying Indonesians 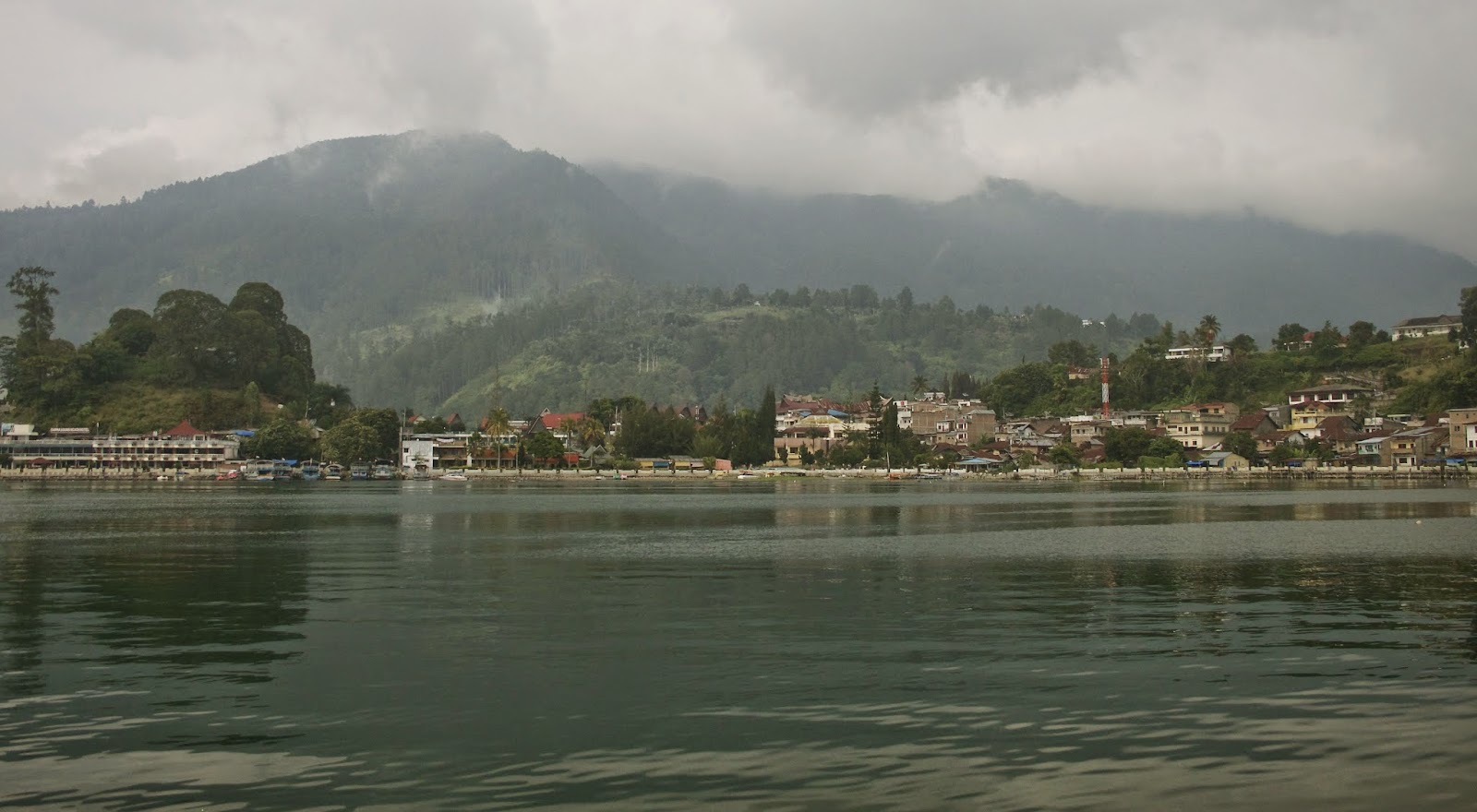 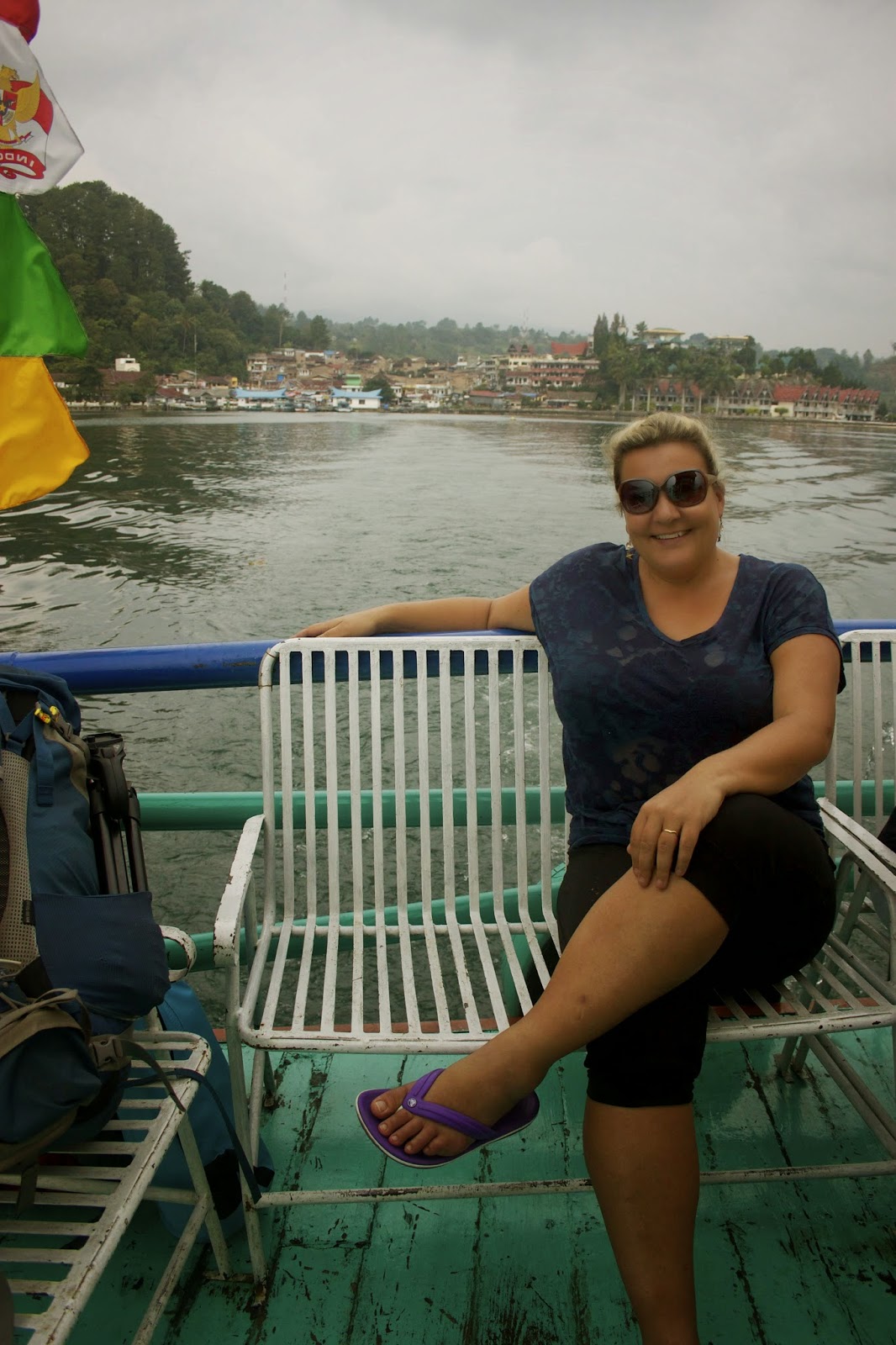 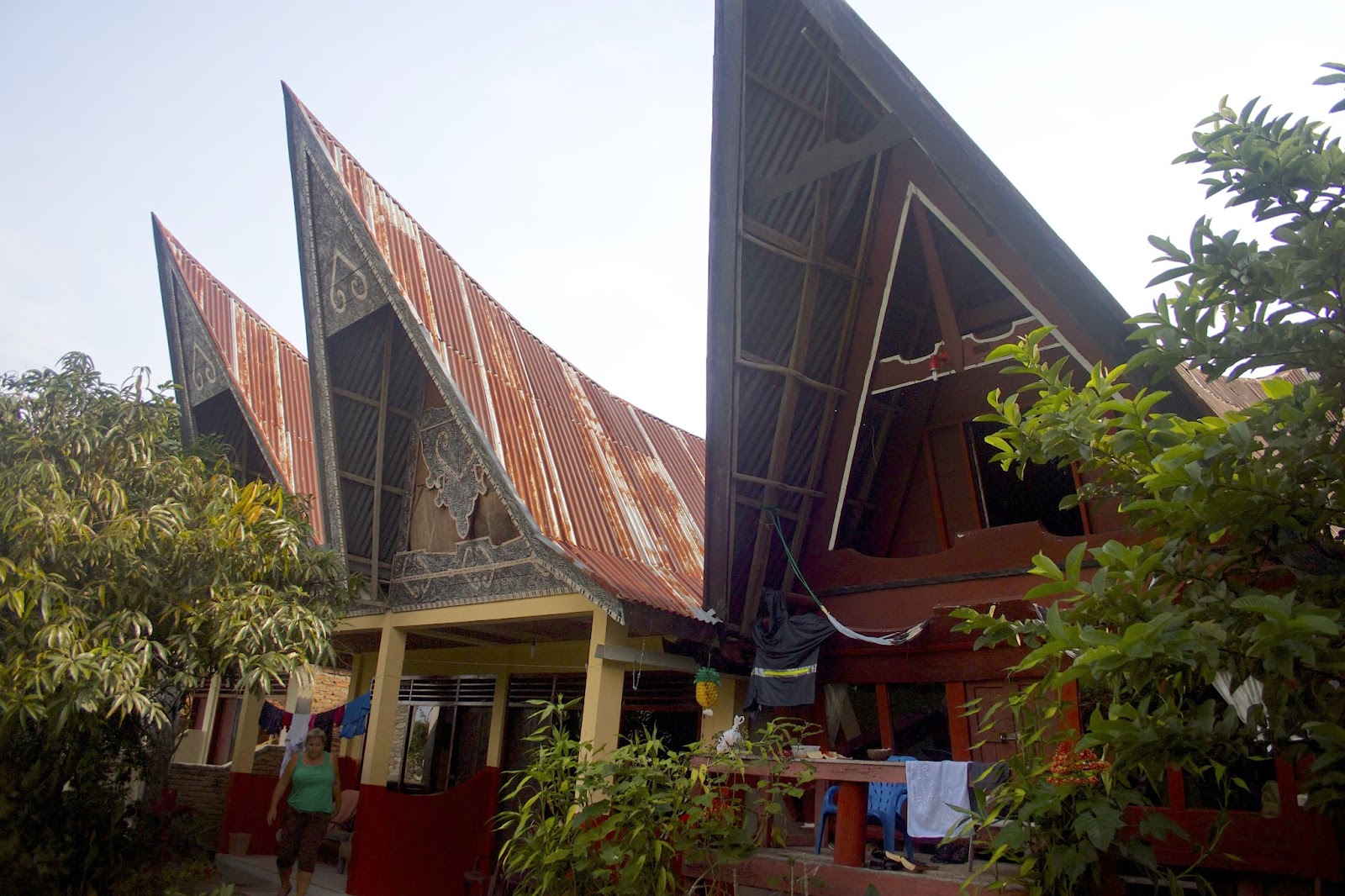