On our return from the Amazon we got the chance to explore the capital further. The traffic was still terrible, but taxis were cheap and the city's settling and architecture is pleasant. The city centre is full of old Spanish legacies, particularly religious architecture - superb churches and cathedrals with golden alters, coloured columns, glided balconies and richly sculptured facades. Annoyingly tourists are required to pay a fee to enter these churches, which we didn't agree with, so we didn't go in. The Pope announced that he was to visit Quito on 5 July, which created a visible Pope fever across the city.

Along with our new friends Jessica and Jason, we took a trip up Mt. Pinchincha, an active volcano to get a birds eye view of the once Inca city. Thankfully, a sky tram took us up to the top. From our vantage point at 4100m we saw the city spreading along the high Andean valley in a roughly north- south direction. We took lunch together in the Old Town at San Agustin, a colonial style bakery and restaurant..... I had the ceviche prawns - raw prawns 'cooked' in lime juice and seasoned with herbs and onions, absolutely delicious.

Soaking up the afternoon sun in Plaza Grande was really enjoyable. We were able to watch the passers by; the persistant street vendors, shoe shiners, ambling police pairs, nuns scurrying past and groups of school children with sweet snacks after school - the girls in white pleated skirts with high white socks. We finished off the day with an impromptu karaoke session- such fun!

With many museums to choose from on Friday 19th June we visited the former house, now museum, of Maria Augusta Urrutia. We learned that she was a wealthy lady, part of Quito’s elite, who, following her husband’s death in her early thirties dedicated the rest of her life to caring for the street children of Quito.

Her collection of European furniture was high class and a feast for the eyes. Her bathroom featured two enormous stain glassed windows and followed an Art Neuvau style. Due to her generous charitable work she was awarded many national service medals and gifted many Catholic relics, generally small pieces of bone or hair, carefully presented on a silk backing and denoting the saints name, encased in a finely decorated metal frame.

Later that afternoon we enjoyed walking down the 16th century narrow cobbled streets of colonial architecture. La Ronda is a recently renewed area consisting of a small street now lined with artisanal shops and restaurants. Visiting a chocolatier we received a personal presentation of how chocolate is made from the cocoa bean to the final product - with samples! The local ceramics were jolly, but we doubted we would get them home in one piece. We consoled ourselves with some handmade sorbet, and felt like real tourists wandering the lanes with cornet in hand. We passed whitewashed walls with red tilled roofs, heavy wooden doors and peaked inside to see fountained courtyards, with stone pillars propping up the open galleries, reminiscent of the Moorish styles of North Africa and Southern Spain.


The view over Quito from the cable car as you ascend Mt. Pinchincha 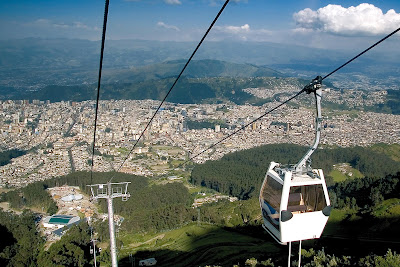 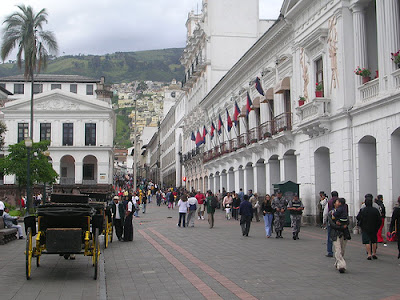 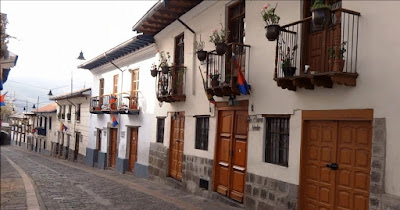 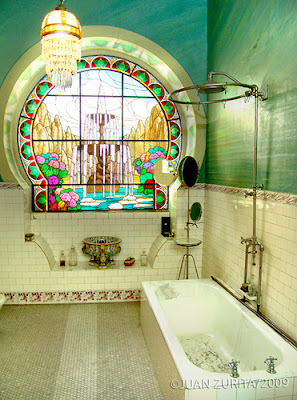 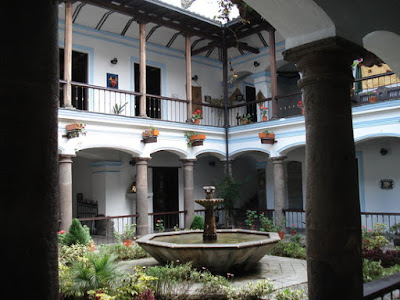 Opulence abound, in this room she would entertain her most important guests including presidents and travelling dignitaries from all over the world 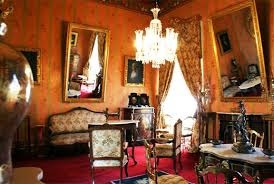