As starts to expeditions go, this one was not good. Firstly I was suffering from a heavy cold, sprinkled with bouts of diarrhoea. Then despite being 30 minutes early for our boat taxi we'd forgotten our prepared sandwiches for lunch and the following morning's breakfast. To top it off, and probably the most severe lapse of all, we'd also forgotten the sausages for dinner. This was a double blow as sausages are Chris's favourite, and the only meat we'd packed for the trip.

Not to be disheartened we took the boat taxi from Picton (top east of the North Island) to Ships Cove at the far north-eastern end of the Queen Charlotte Sound. Ships Cove is an east facing bay on a finger of land that stretches into the sound. This is where Captain James Cook moored the Endeavour. He arrived in 1769 and climbed up to a vantage point to observe that there was a channel splitting New Zealand into a North and South Island. Ships Cove was chosen to harbour Cooks expeditions another four times, generally for about three weeks at a time. They collected botanical samples, conducted astronomy, re-baked ration biscuits to get rid of the weevil infestation and traded with Maori tribes. The area was used seasonally by the Maori as there was superb fishing to be had and the natural forest provided materials for medicine and building.

The meandering 71km Queens Charlotte Track was our target for the next four days. The landscape here is famed for flooded valleys, or 'sounds'. These are created when the landmass sinks, as opposed to the 'fjords' which is where a previously glacial-covered valley is flooded when the sea-level rises.

We found a Weta scavenging along the shore, he didn't seem to mind the rain! It rained all day; it was heavy rain, the type that creates bubbles in puddles. The views of the surrounding bays were shrouded in a veil of clouds. We completed the first 15km section by early afternoon and I collapsed into our hut's bunk bed at the Endeavour Inlet trying to sleep off my cold. Whilst I was slumbering Chris happened to start up a conversation with a party of guests who had chartered a boat to go fishing for the week. We were surprised when a lady from the party arrived to give us some fresh Blue Cod. Chris waved it in the direction of the stove and it was absolutely delicious.

A second soaking day along the well marked track took us through tree ferns (yes, ferns the size of trees!) and black fungus covered beech trees. We saw a stoat dart across the track, obviously the numerous traps set to catch these invasive species were not 100% effective. Our homestay was with Noline, an 84 year old who welcomed us with warm scones topped with three inch thick slabs of butter. She provides accommodation and cooking facilities for up to six people per night in her home. The income funds her travelling, which she does alone each year. Her late husband did not like to travel, so after his death 20 years ago she started to take in guests and in the winter travels the world. We were amazed that she had visited over 60 countries since she started her homestay business. We met some fellow trampers - Chloe and Angus, who entertained Chris with their cheery banter whilst I spent the evening resting in bed.

The rain cleared for our third day which covered some steep climbs in dappled sunlight. We walked about 25km that day, and I remember spotting evidence of wild pigs snouting up the forest floor. The track did not follow a ridge line and the numerous climbs and descents as we wove in and out of bays were punishing on the joints. Keeping an ear out for the native birdsong from the bush-clad hills, we glimpsed Fantails and Grey Warblers darting in to the thickets and the occasional Weta browsing in the grasses. We were rewarded for our labour by some superb views over the sounds.

The final day was another 20km with a 400m climb at the start. The thought of this sudden ascent right outside our doorstep did not encourage me to hop out of bed. Yet I didn't grumble (that much). We were walking by 8am as we had arranged a collection at 3.30pm. It was a slog to keep climbing upwards to the crest of a hill only to see the path ahead fall and then climb again up the next hill.  The weather held good though and we set a fantastic pace. In the end we arrived a couple of hours early in the small settlement of Anakiwa at the western end of the track 72km later. This gave us a chance to relax in the sun and read our books until the boat taxi arrived to ferry us back to Picton. That night we met Chloe and Angus on the Picton waterfront to congratulate ourselves for a walk well done with a beer or two.

The first tentative steps along the jetty at Ships Cove 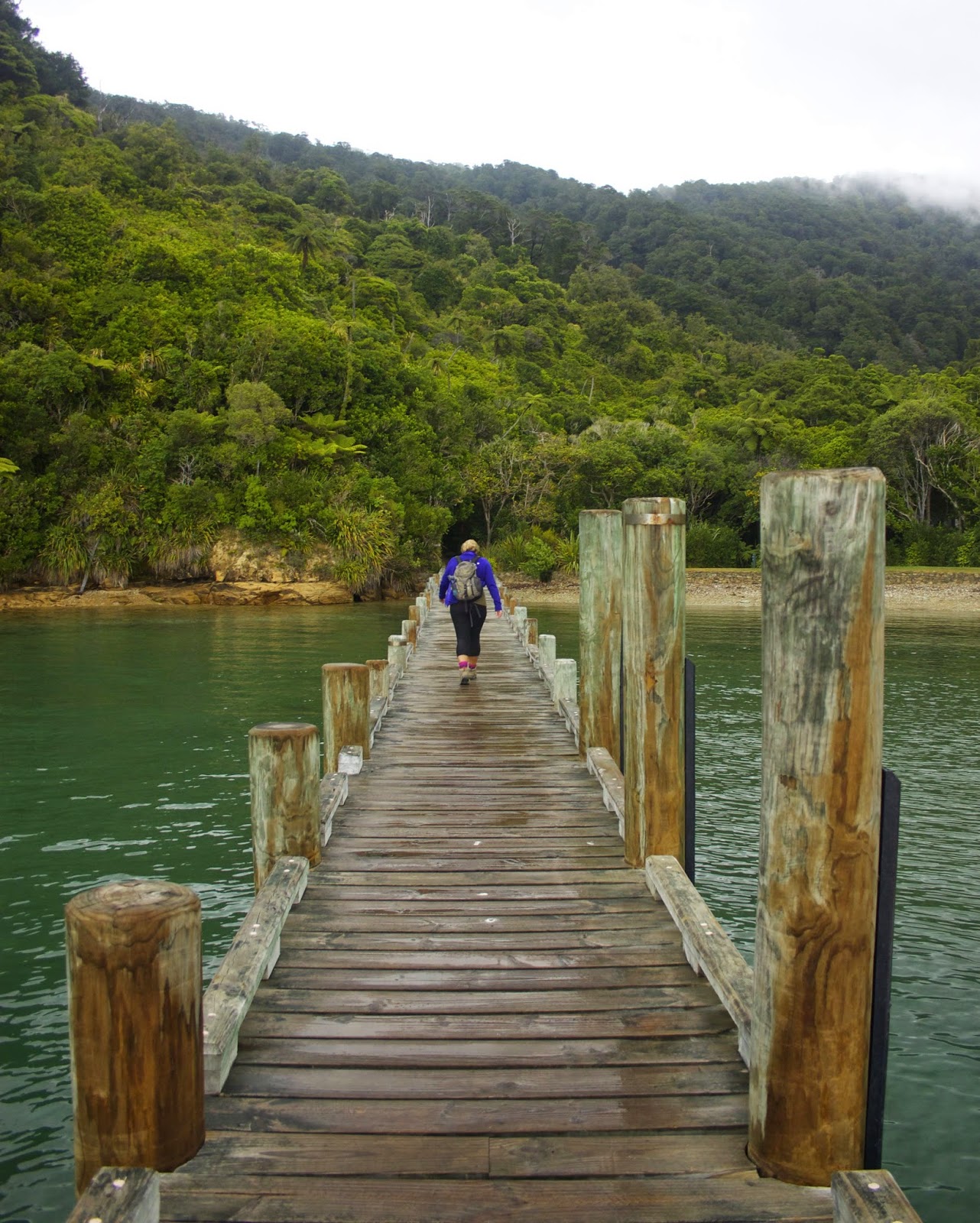 The monument to Cook and The Endeavour 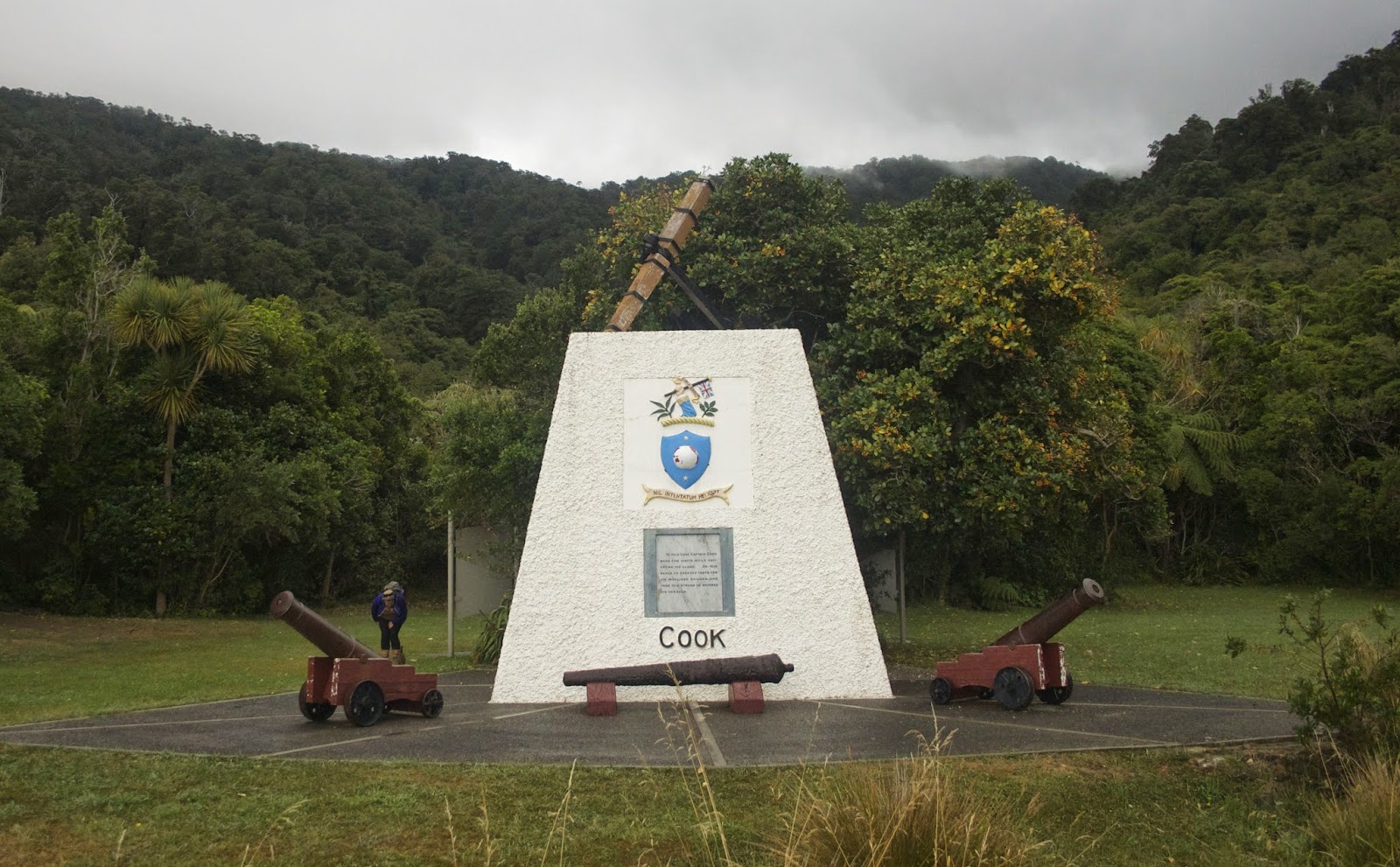 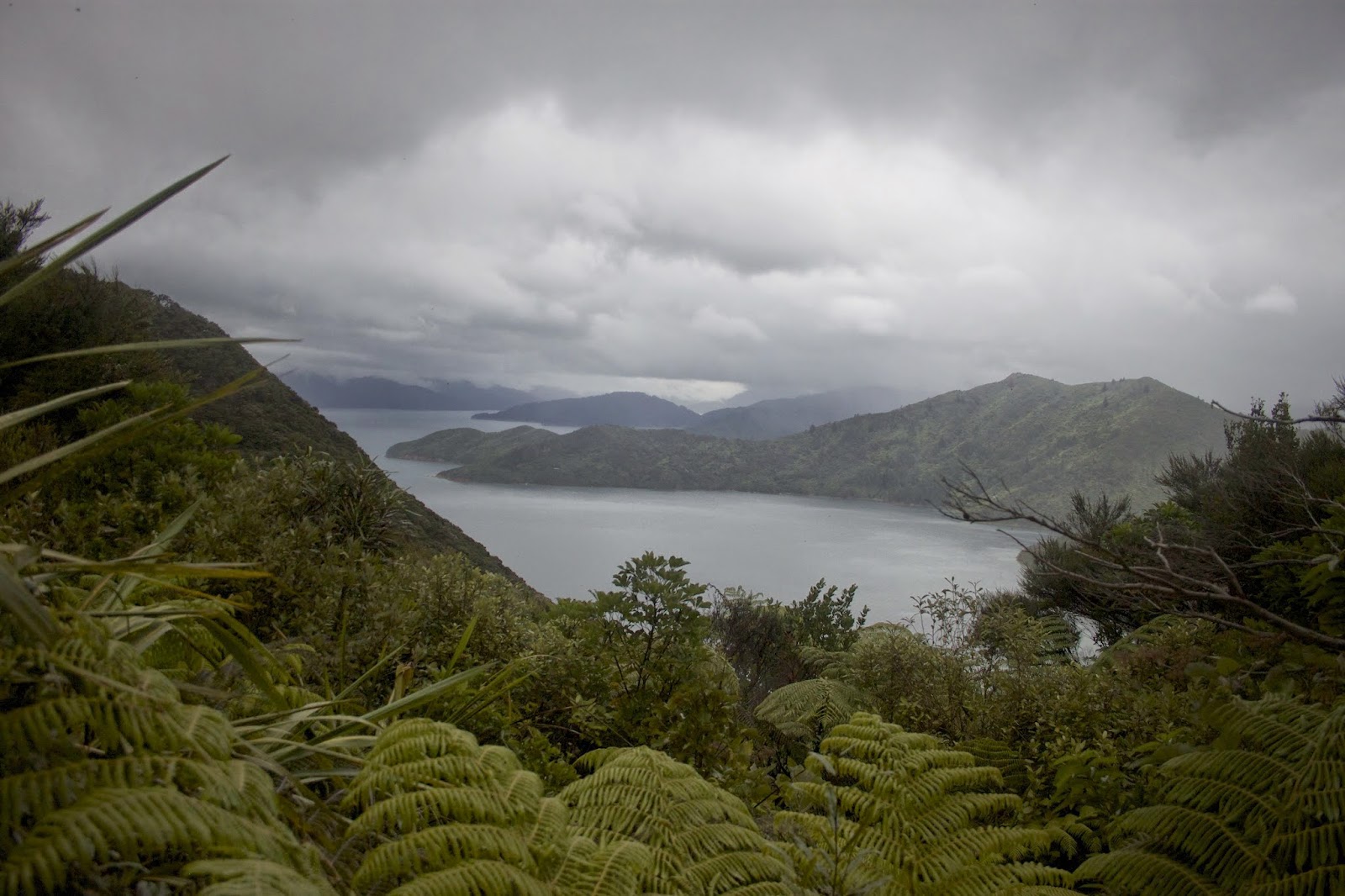 Shelter from the rain in our cosy cabin 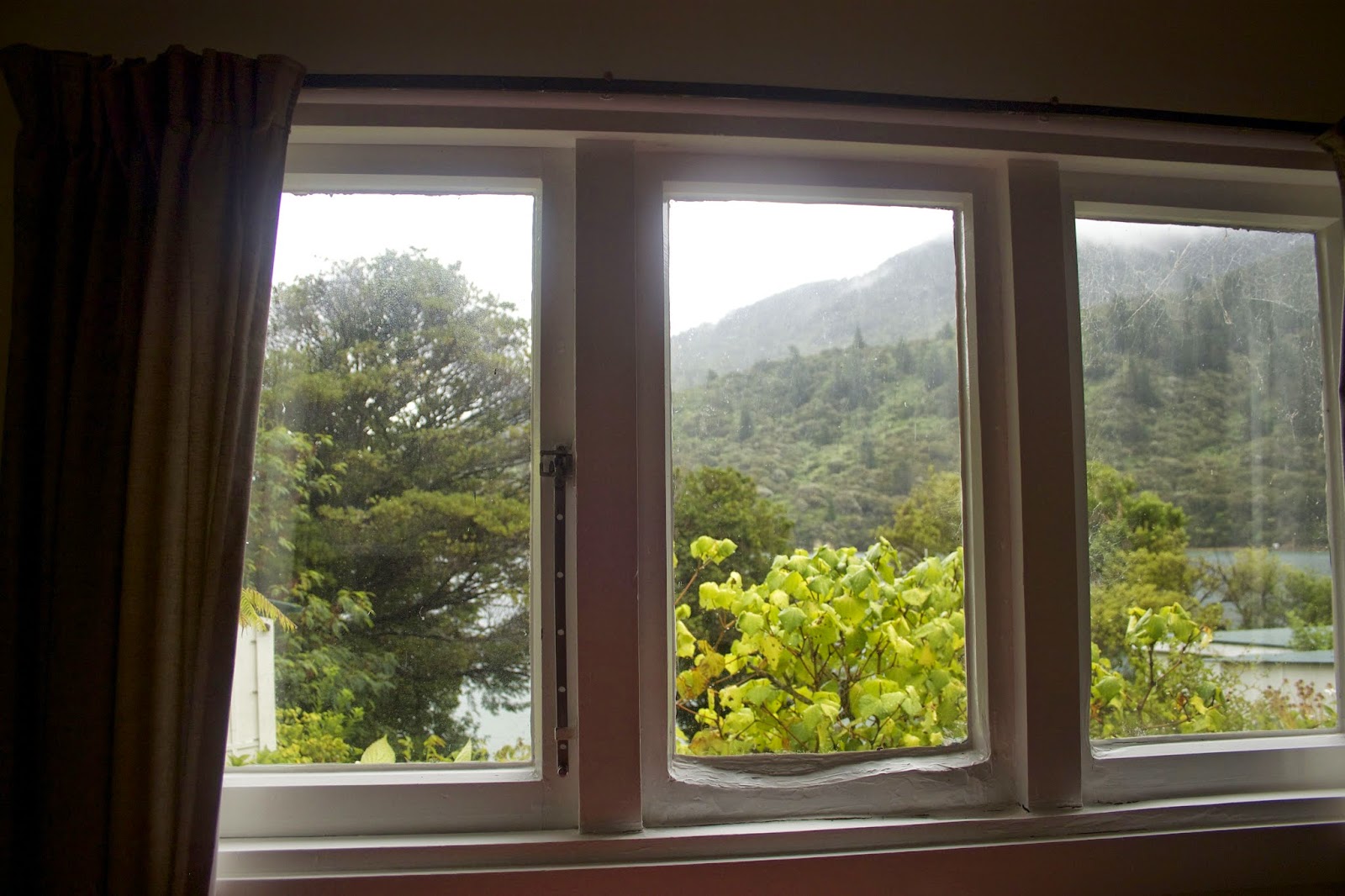 Sausage and mash without sausages but with cod! 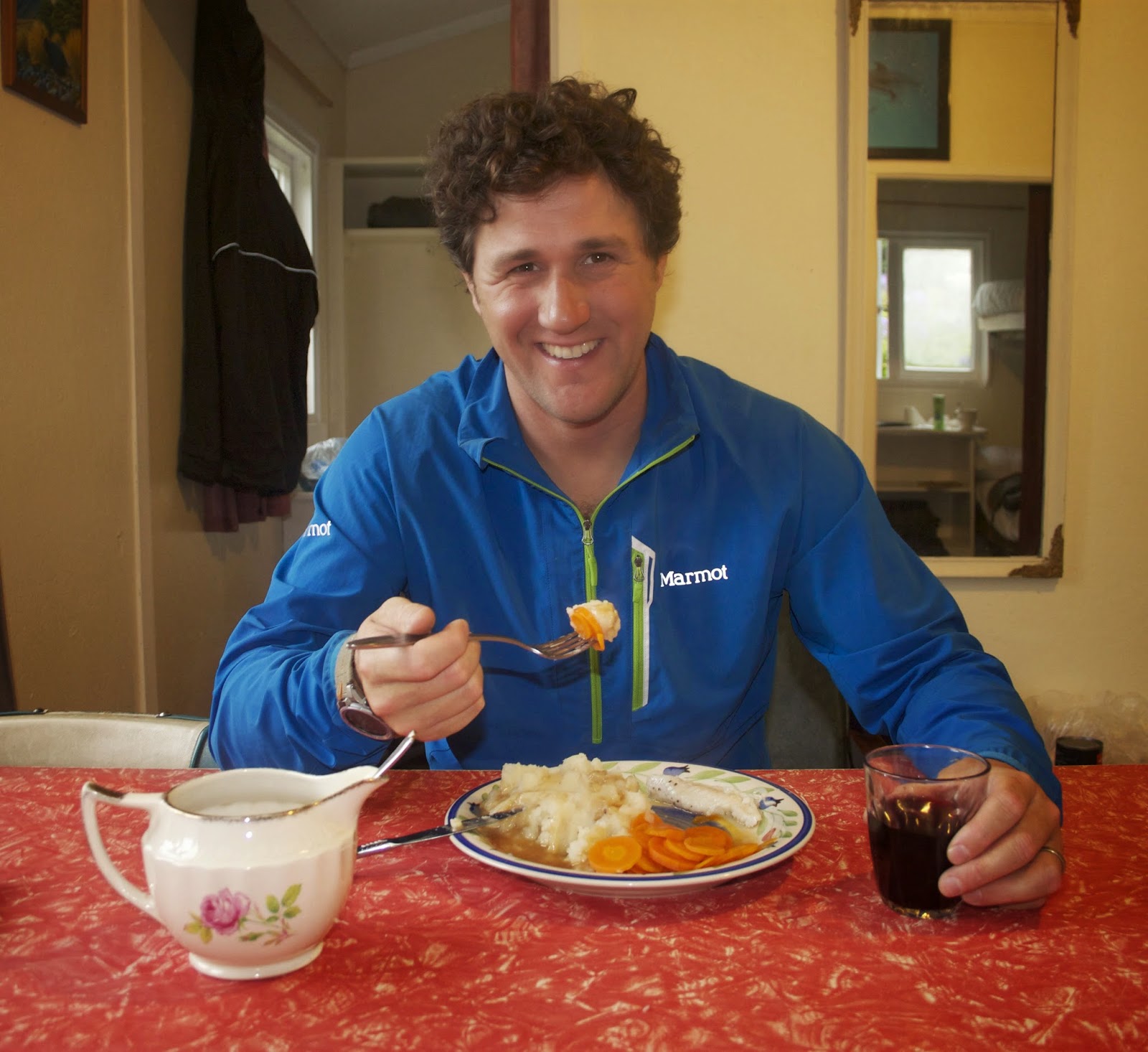 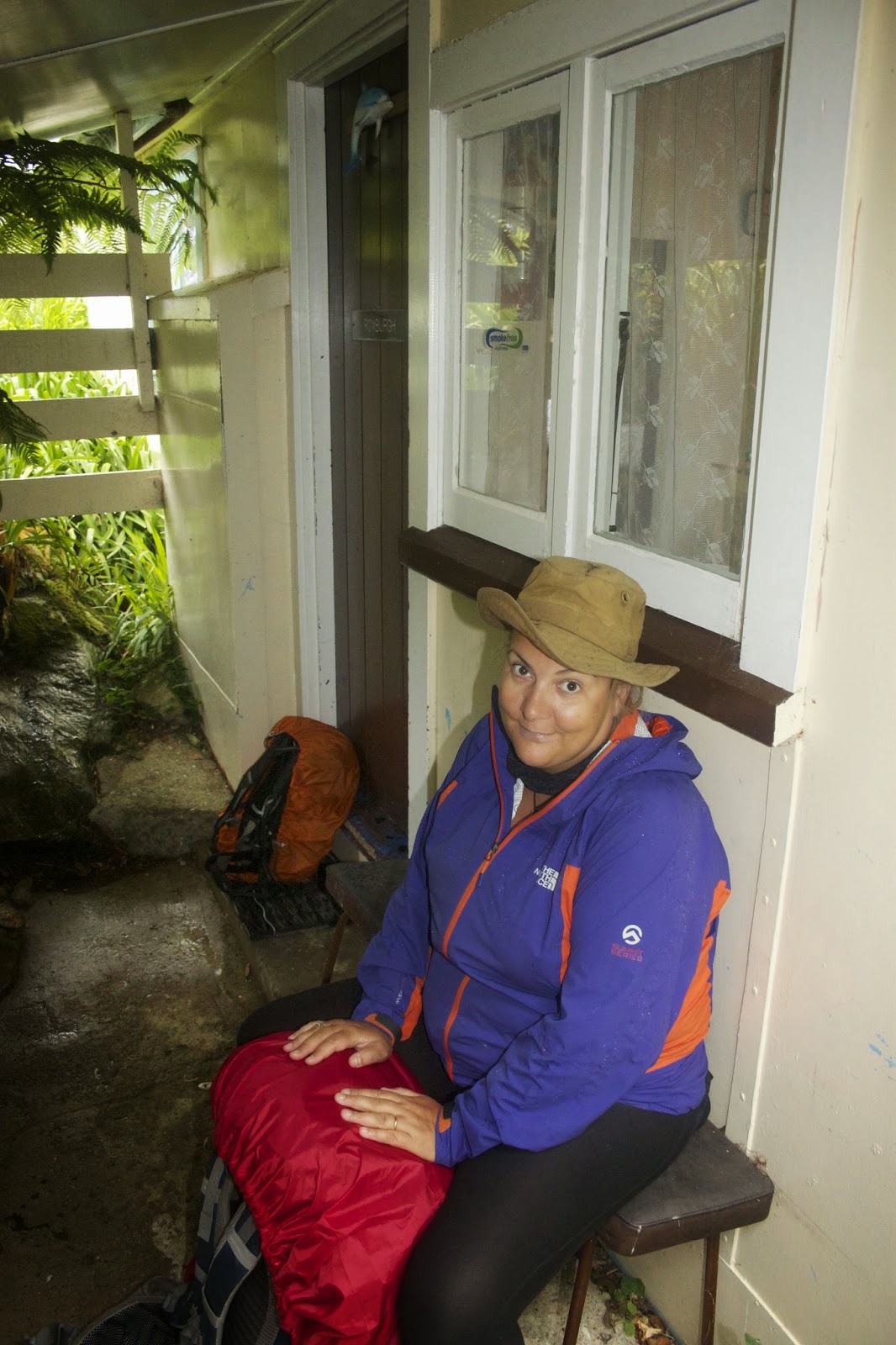 Beautiful views from Noeline's balcony over the sound 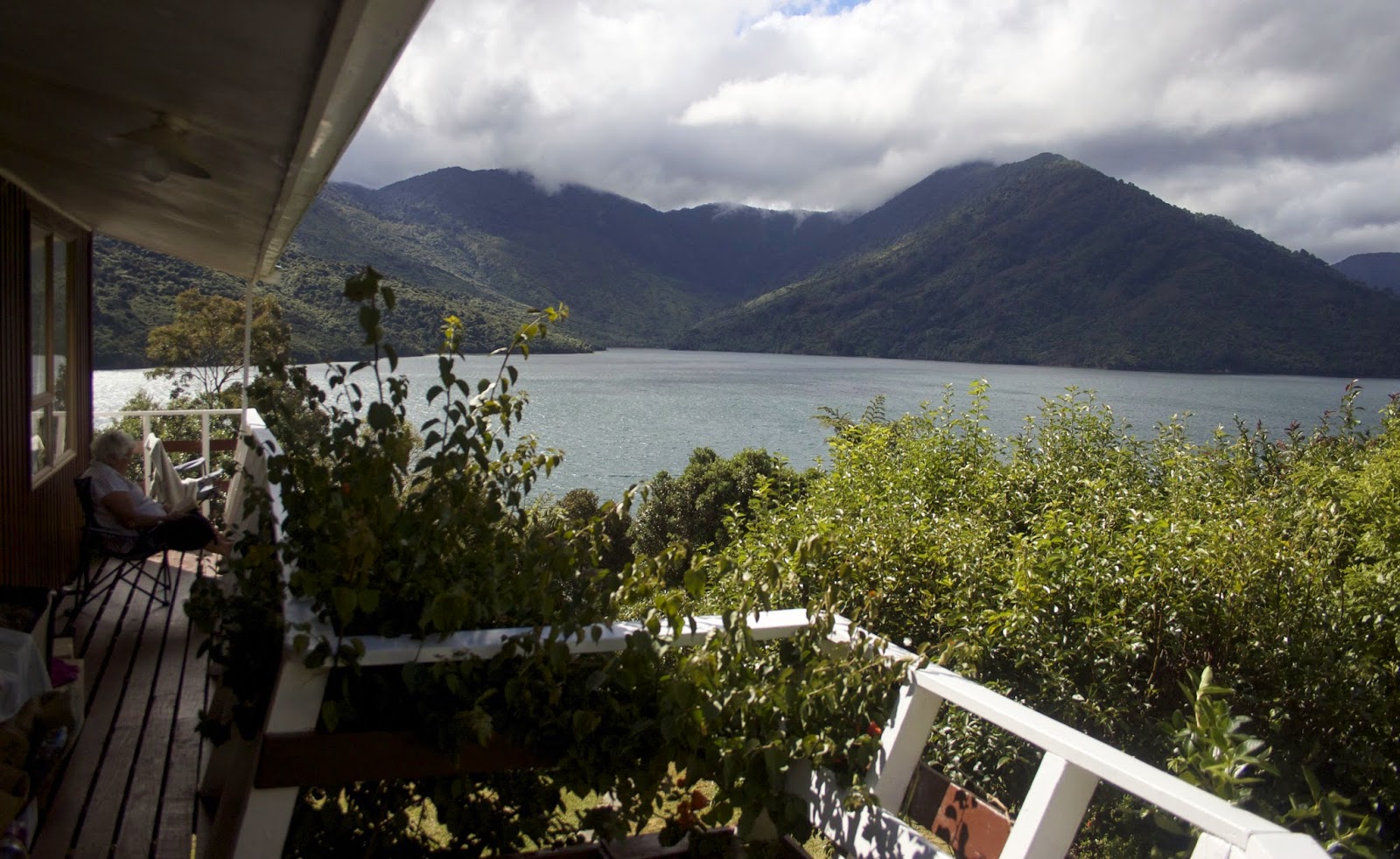 The jetty at Noeline's where Chris went for a relaxing dip to warm up after a day's walk in the rain! 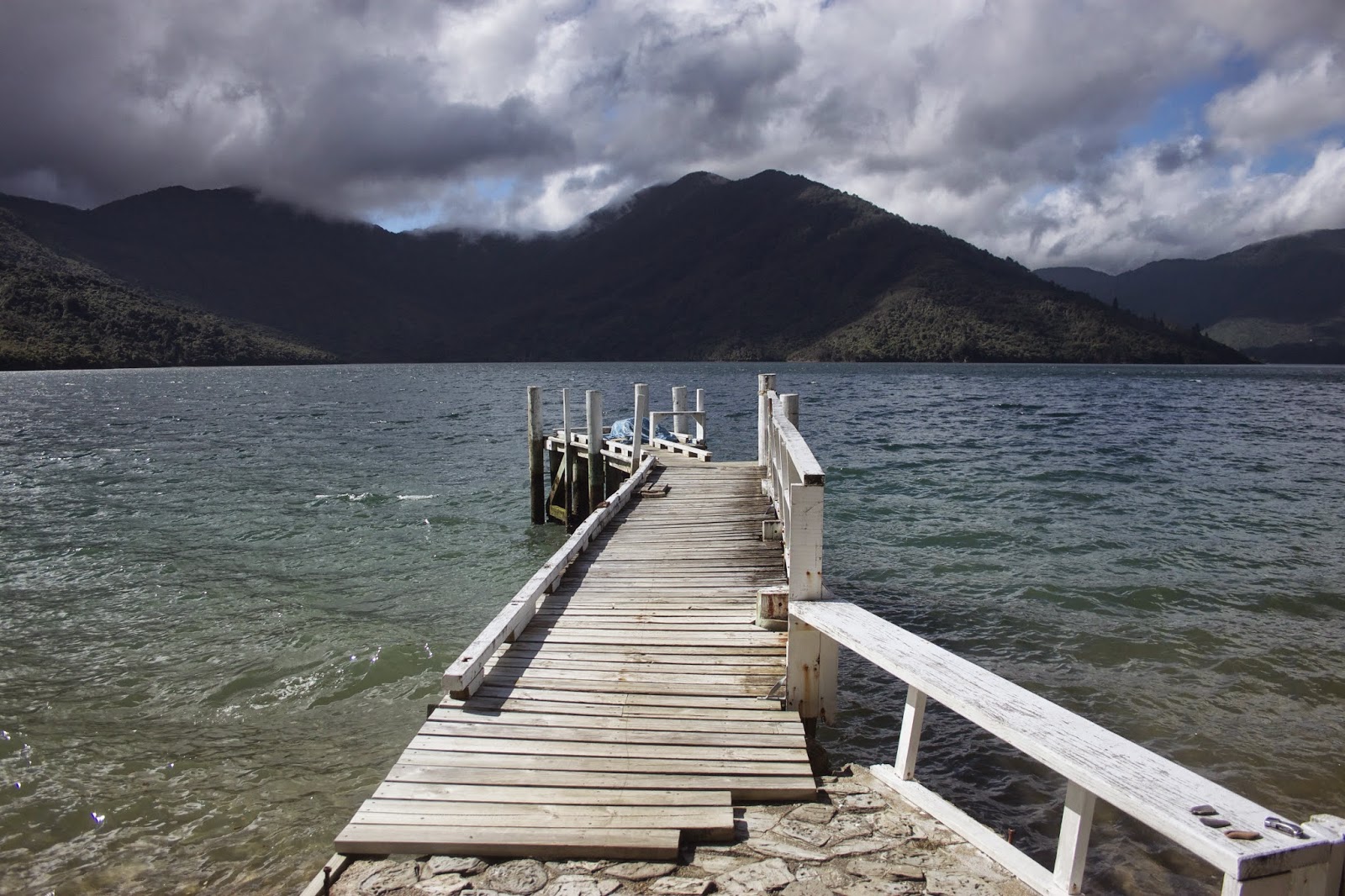 A much drier third day in the sunshine 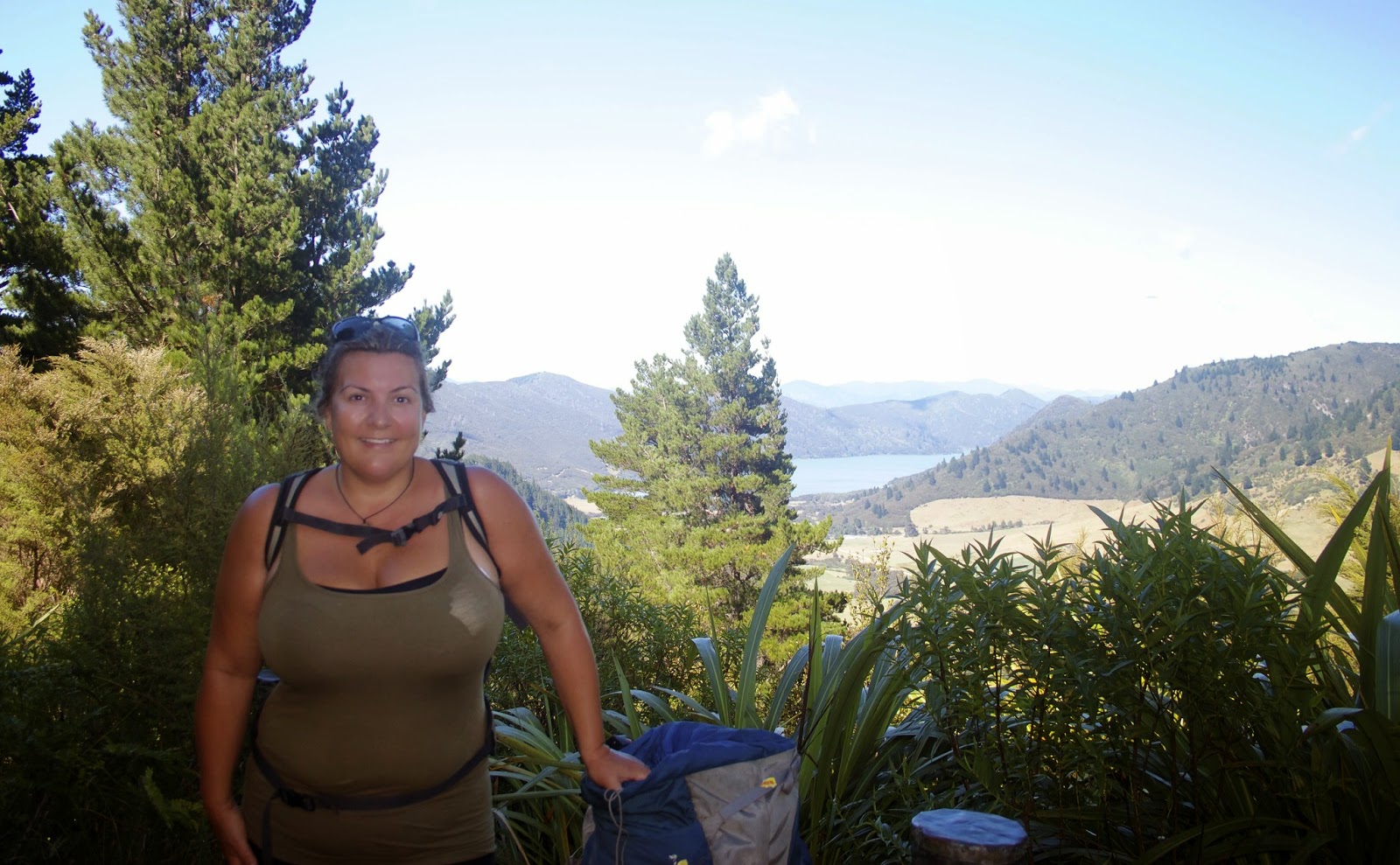 The views just get better 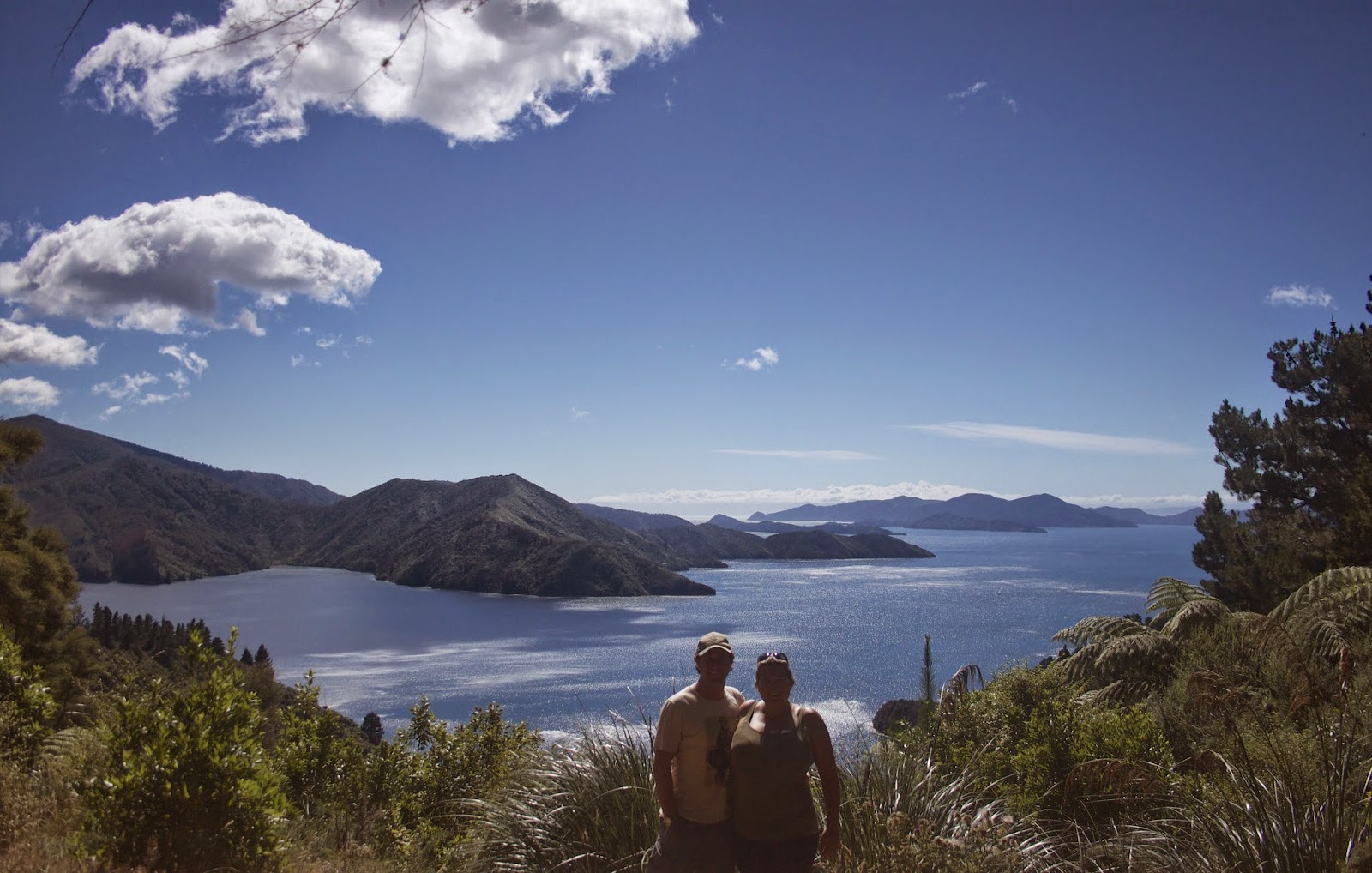 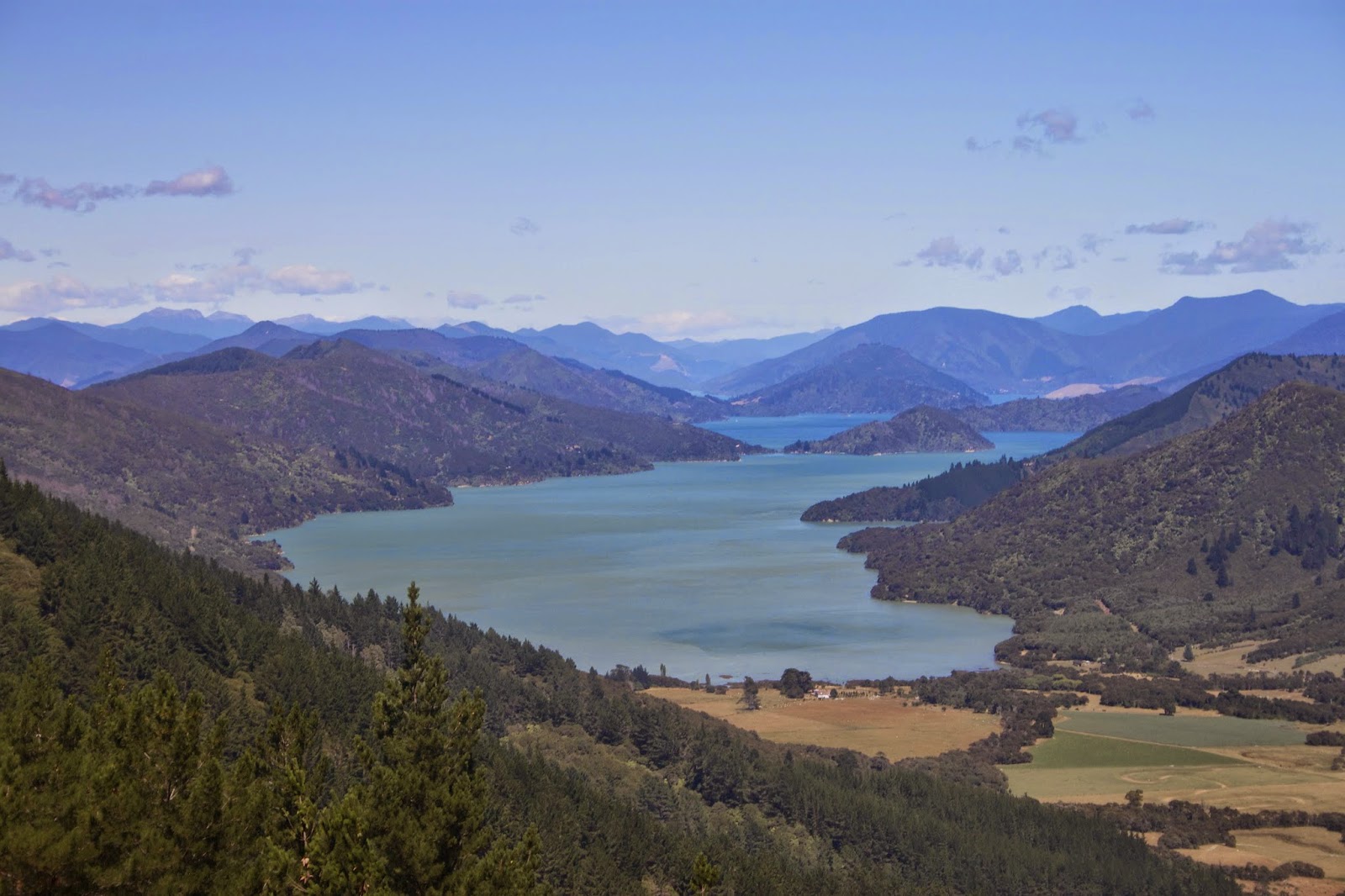 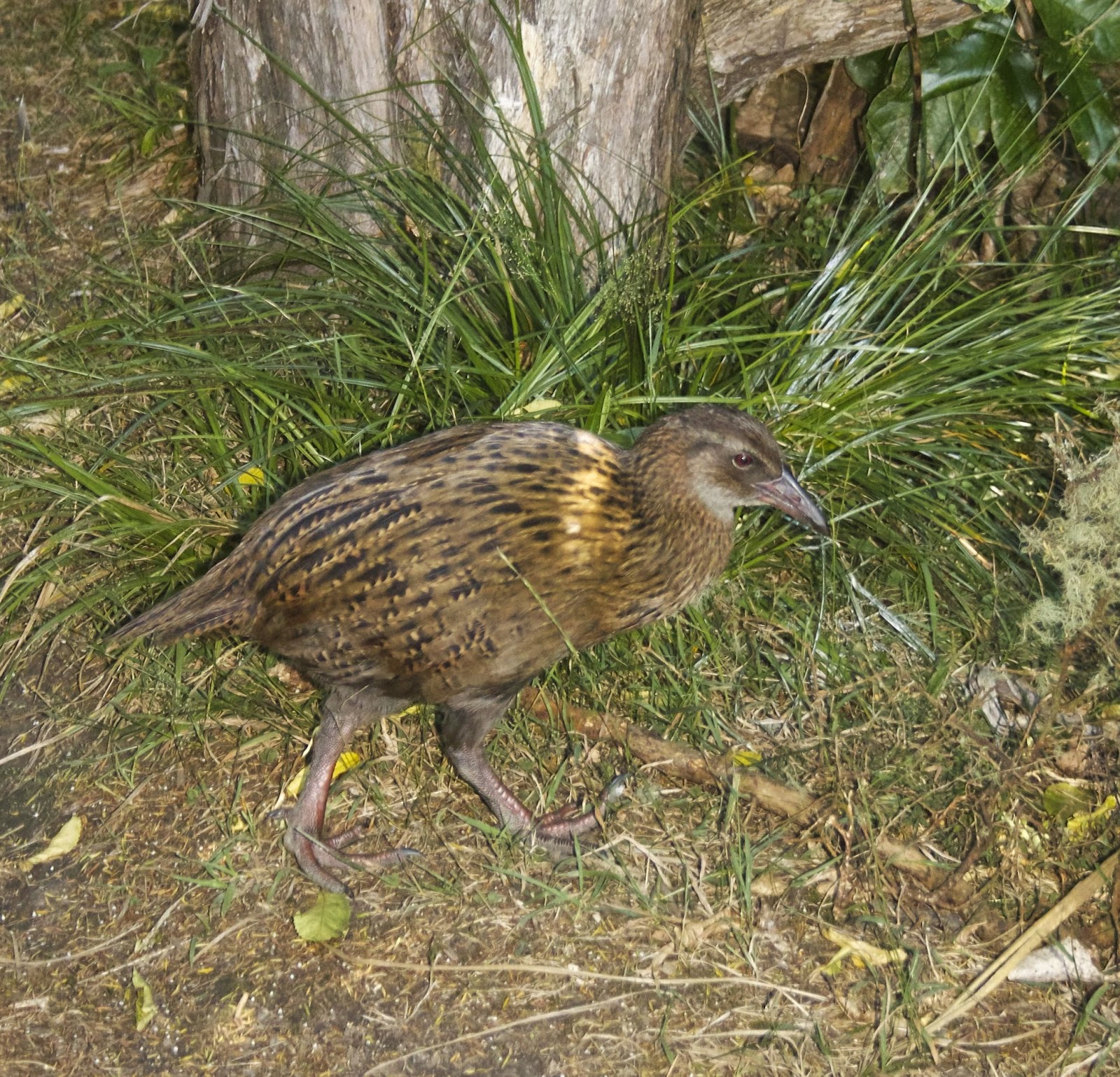 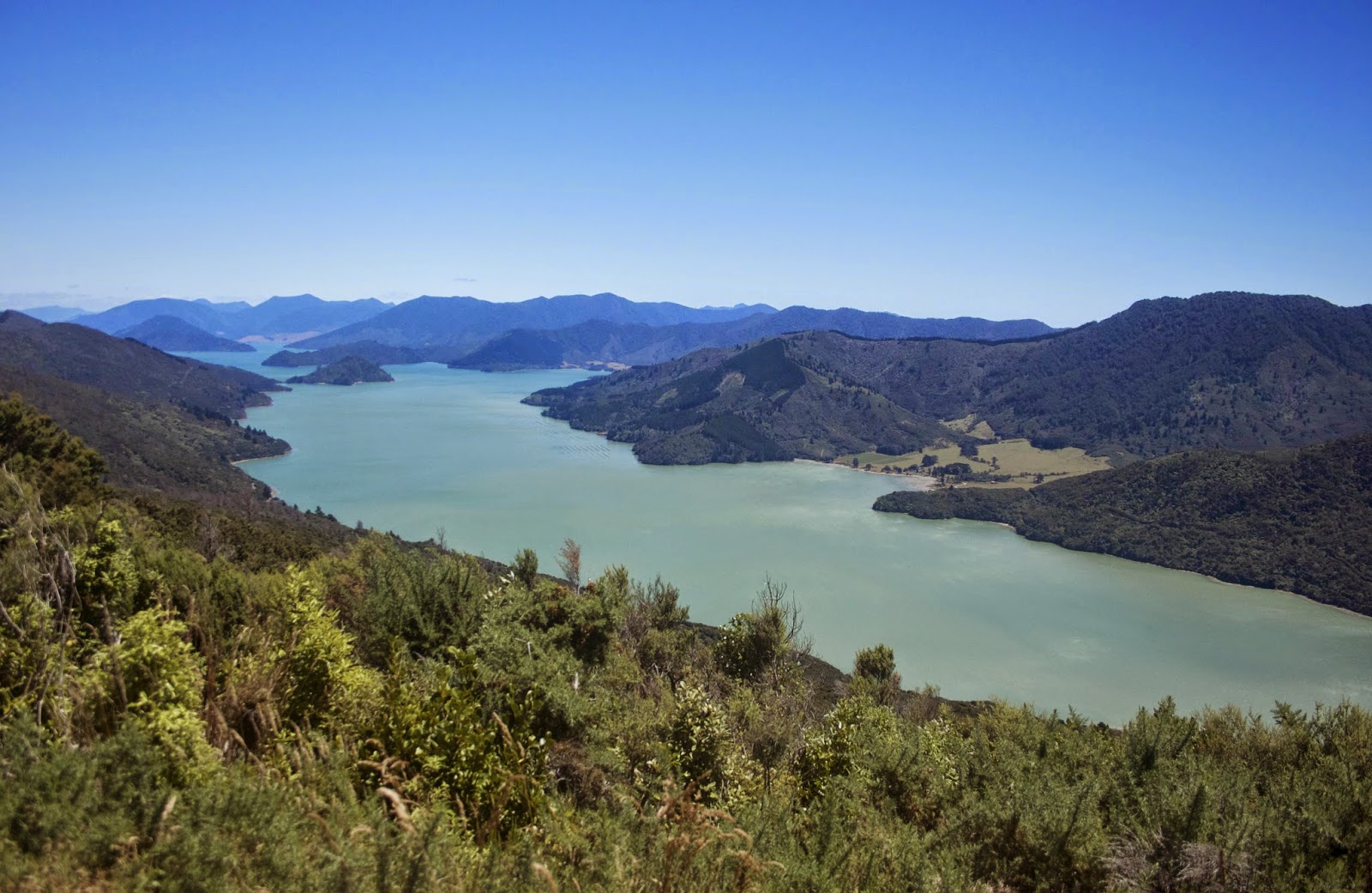 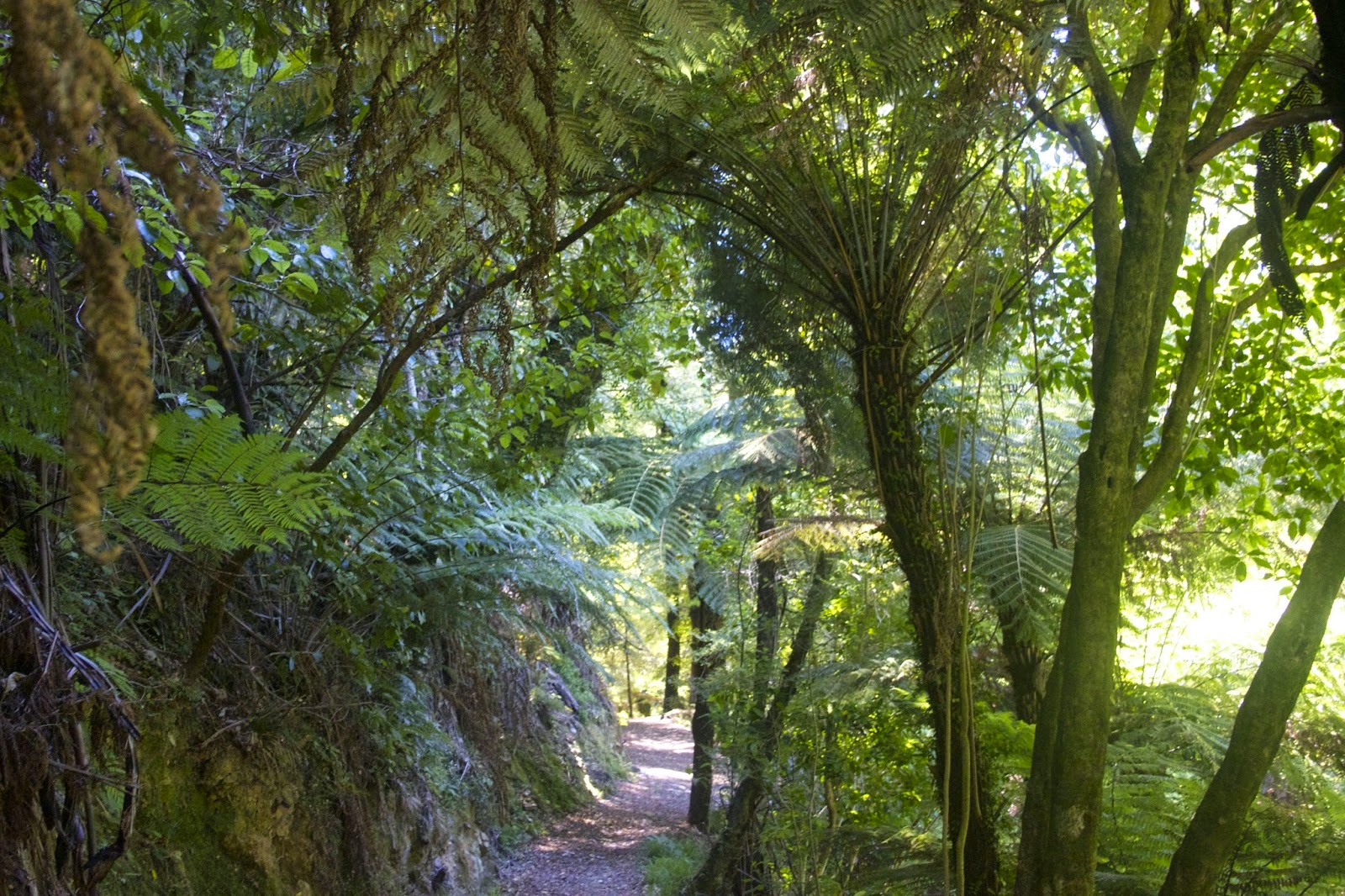 Looking towards Picton our final destination 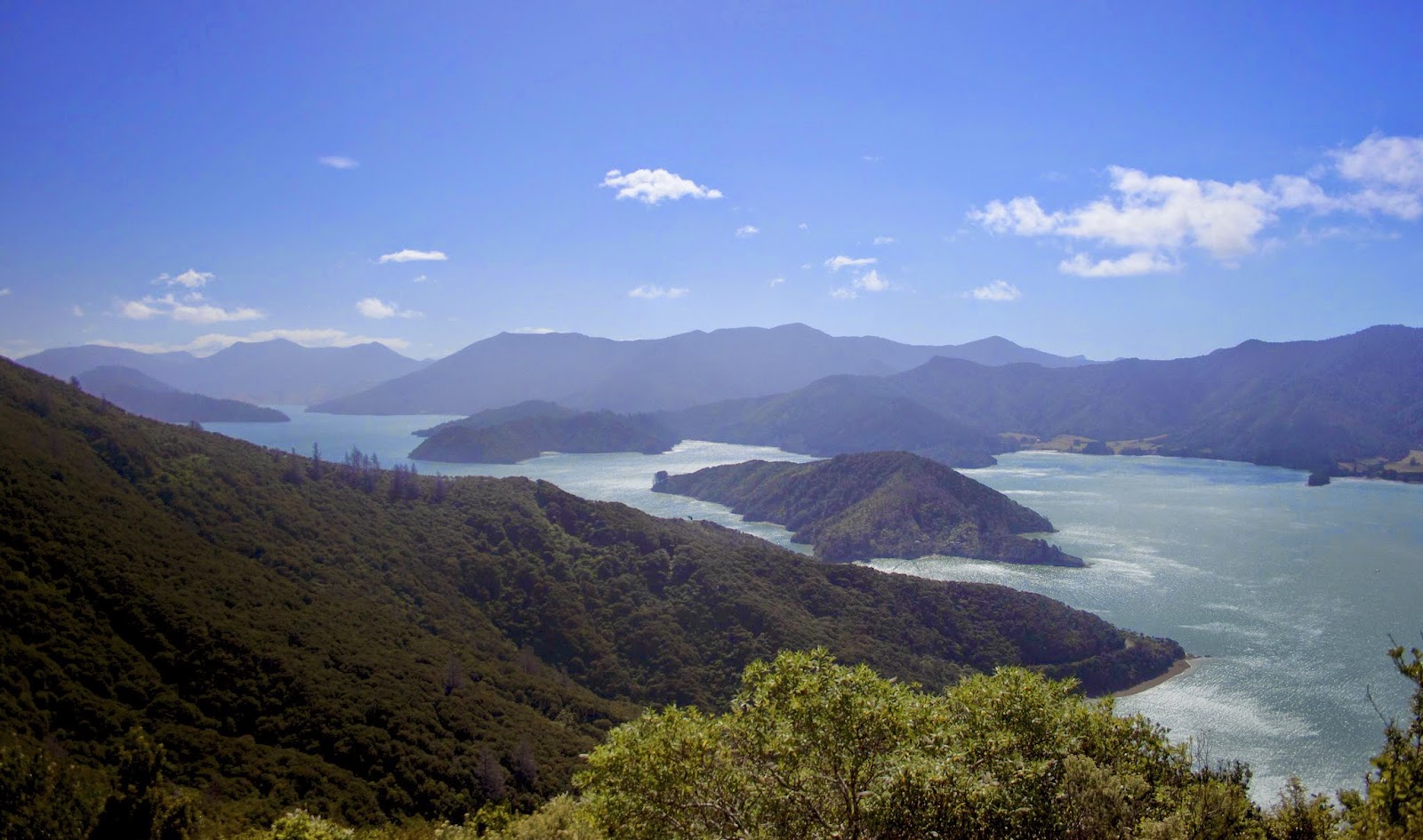 As you go higher everything gets steeper 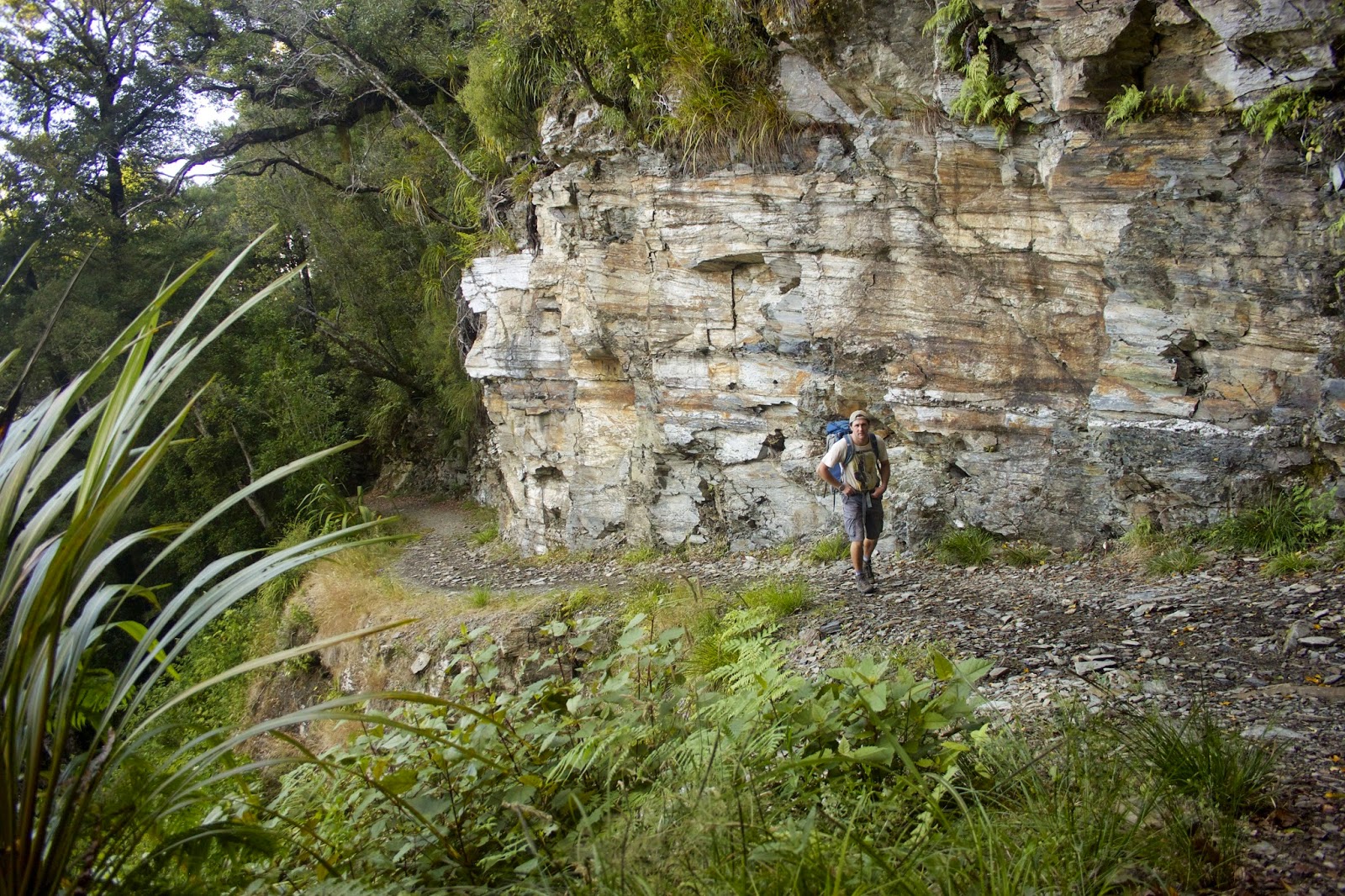 Our bay for the third night 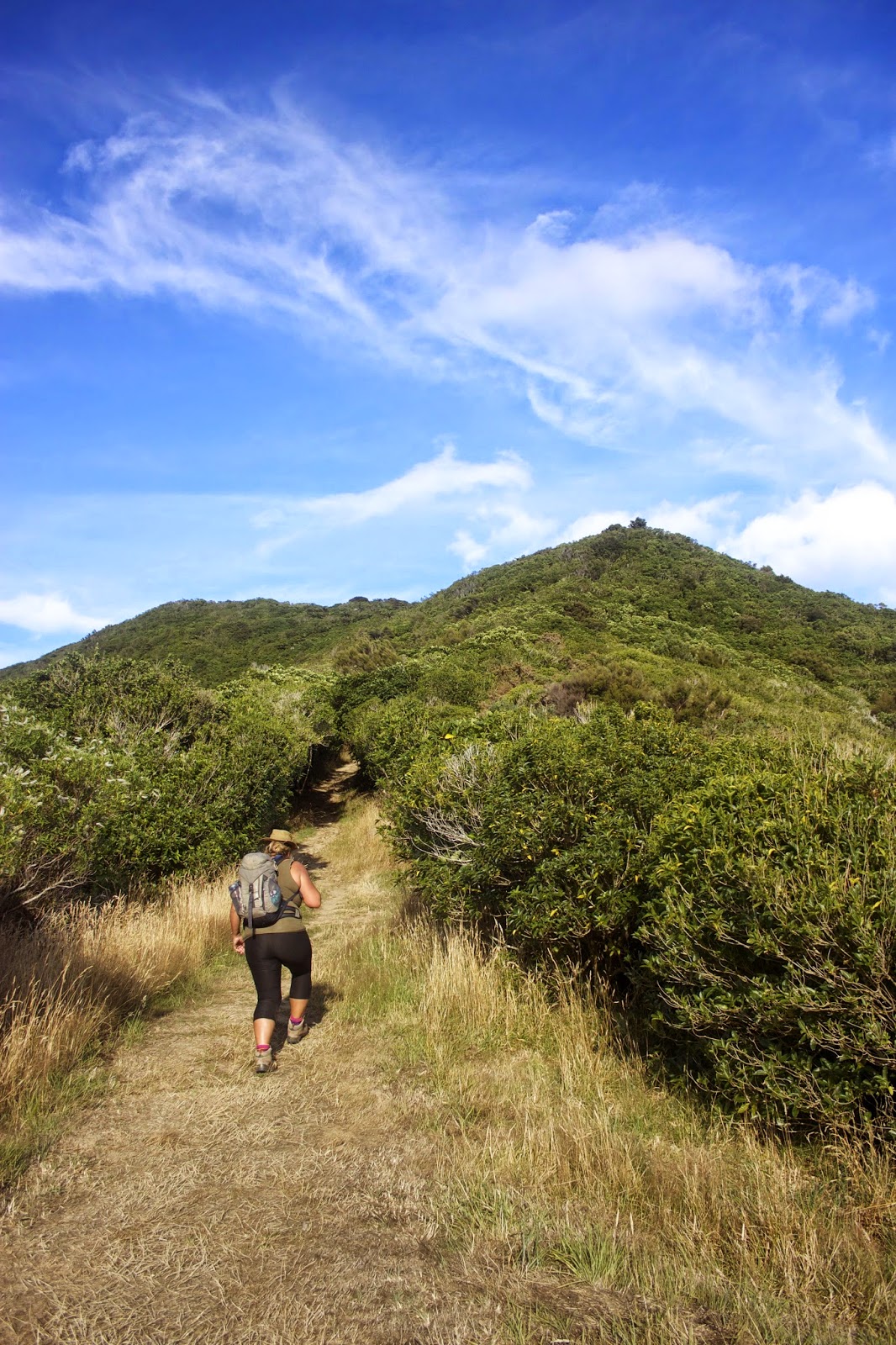 The cicadas played constantly the whole route, often flying off the trees into your face and body 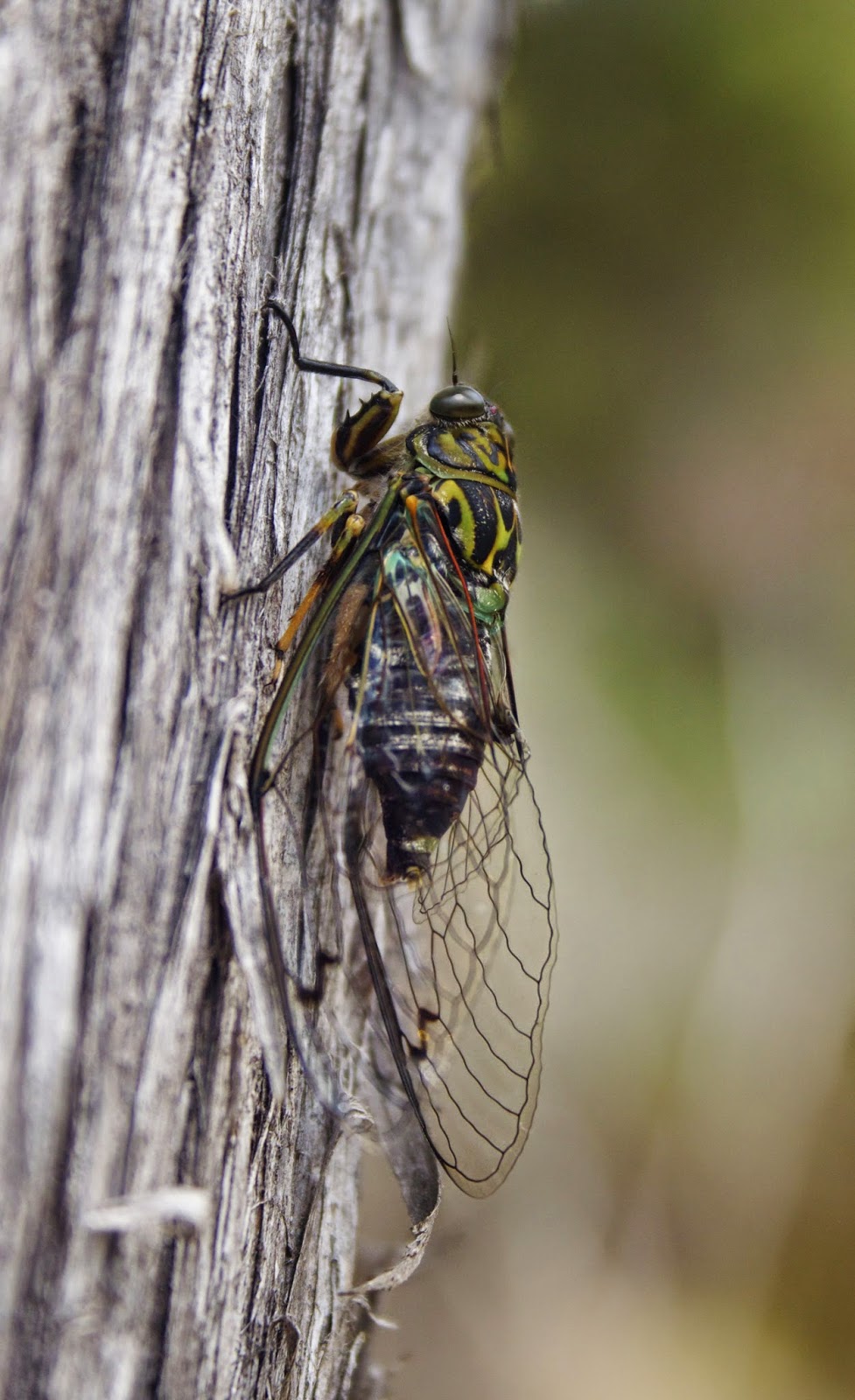 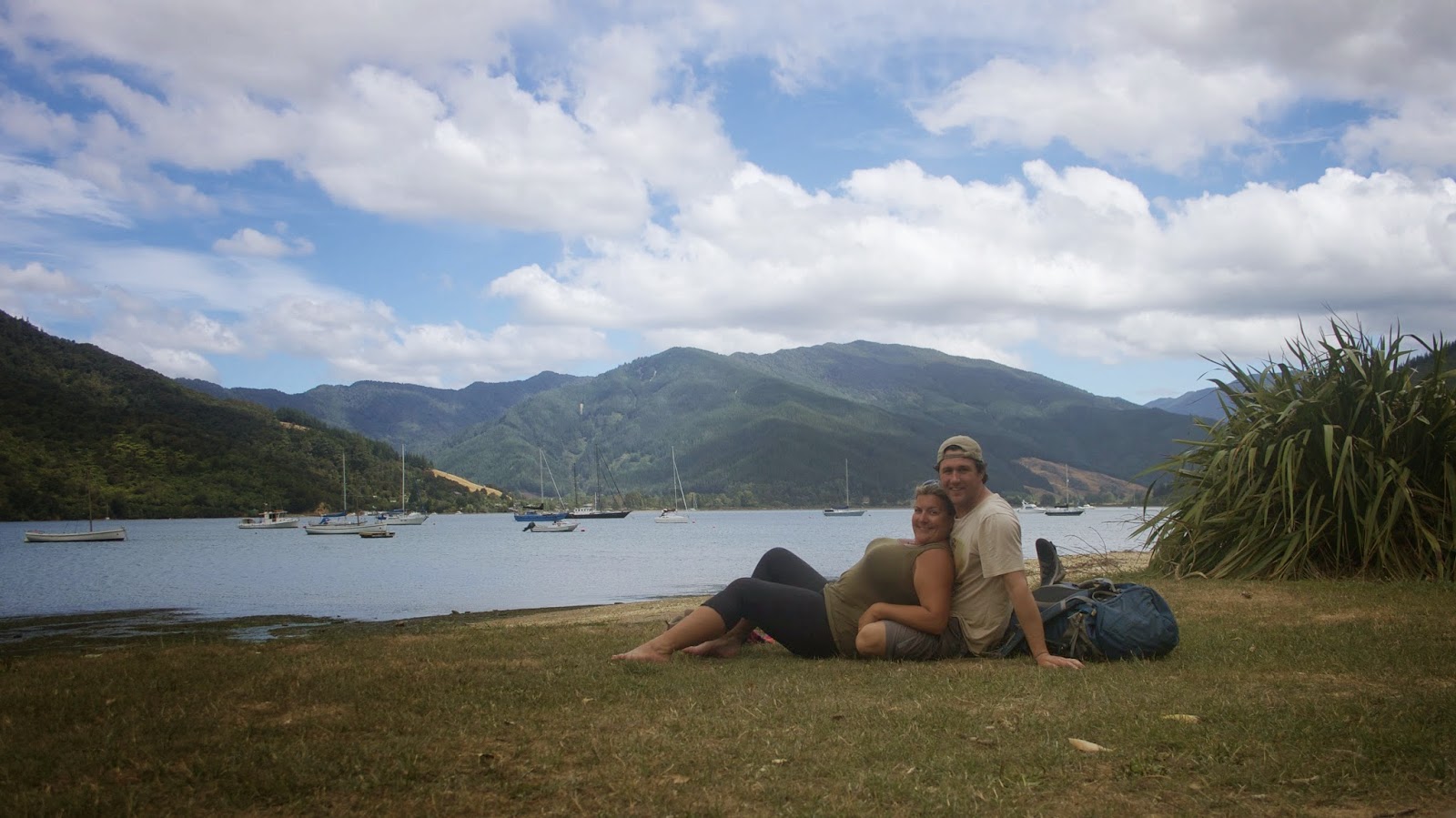