An expedition to the Catlins

A 4x4, 48 hours to spare and a whole southeast coast of a country to explore sounded like a great challenge. So with John's car free for a few days we set off with new friend Abbie to explore New Zealand's remote Catlins.

We drove the 3 hours to Dunedin in torrential rain praying to see a break in the clouds as we neared the coast, but we weren't in luck. We scooted round Dunedin and headed out along the Otago peninsular hoping to get  a walk in before we lost the light. At Portobello we turned onto an unsealed road and wound our way down to Allan's Beach. The rain had reduced to a steady stream and we headed off to see what we might find. We weren't disappointed; within fifty yards of stepping on to the beach we found our first sea lion, basking in the afternoons downpour. Further down the beach more were found amongst the boulders that had fallen from the cliff face above, some huddled together, others sprawled out on their own. We waited to try and spot penguins coming home to roost at dusk. But with the light fading and the rain intensifying we beat a retreat.

Portobello is a tiny village but the pub was spot on, great food, beer and local rugby on the telly - perfect. Once we dried off, filled up and wet our whistles the rain began to ease, so we found a cosy patch of ground up a quiet track with views over the channel into Dunedin and enough space for a car and a tent.

It was a cosy night in the car despite more rain and the day dawned fine. With plenty to fit in before evening we were up at 7 and off hunting for albatross at Tairoa Head. However the centre was closed till 10.30am so we admired what we thought may have been the big A from a distance (or a large gull) and some fur seals hunting in the bull kelp and then headed to Sandfly Bay.

The name had put us off until we learnt it wasn't because of Sandflies but because the prevailing southerly winds mean the sand flies up into the bay creating huge dune structures backing up onto the hillside.

It was a steep walk down these monsters to reach this beautiful, isolated beach and an even worse slog back up them! But it was definitely worth the traipse. The beach is a few kilometres long and the softest sand I'd ever felt. A third of the way along a huge male sea lion lay basking in the sun. His tracks came down from the sand dunes where apparently they quite often sleep. We sat and watched him, after a while a second sea lion appeared further up the beach. She spotted him and cruised along the shallows and then surfed up the beach and approached the oblivious big boy dozing in the sun. As she sniffed his tail he reared his head and then sniffed her nose before greeting her with a growl and flopping back down on the beach where she came and joined him for a romantic bask- sealion love!

At the far end of the beach is a hide for observing yellow eye penguins (New Zealand's rarest penguin) who nest amongst the dunes at that end of the bay. The best time to watch is dusk but as it was only 8am we were a tad early. I did however find their footprints coming out of the dunes heading off for a day’s fishing.

We then headed to Dunedin to grab a coffee. There was a pipe band competition in full swing and more men in kilts than Hogmanay in Edinburgh. Next stop further south at Nugget Point to watch the fur seals basking far below us on the rocks and the impressive lighthouse guarding the coast. Then on to the main event - Curio Bay and Porpoise Bay. Curio Bay has a petrified forest preserved on its rocky foreshore. Dating back to the Jurassic (180 million years ago) many of the trees had been flattened by a volcanic mud flow, the silt and mud covering the fallen trunks and stumps preserving and eventually fossilising the wood so well that even the tree rings can be observed! More yellow eye penguins inhabit this bay too but we were still too early!

Porpoise bay around the corner is named after its resident Hectors Dolphins, the smallest in the world. Very friendly they often join swimmers and surfers playing in the foamy rollers. Today however they weren't being very sociable. We saw their fins breaking the surface a few hundred metres from shore, so braving the icy winds we plunged into the freezing waters and body surfed the waves trying to induce a dolphin reception, but to no avail! Once the whole body was numb the water was most pleasurable (so we told ourselves), but eventually the biting southerly wind drove us back to shore for soul-warming cheese and tomato sandwiches.

We found a wild camp spot up in the forested hills away from the windy coast. We had a sociable evening around the campfire with a couple of Germans, the forest and the stars all to ourselves! 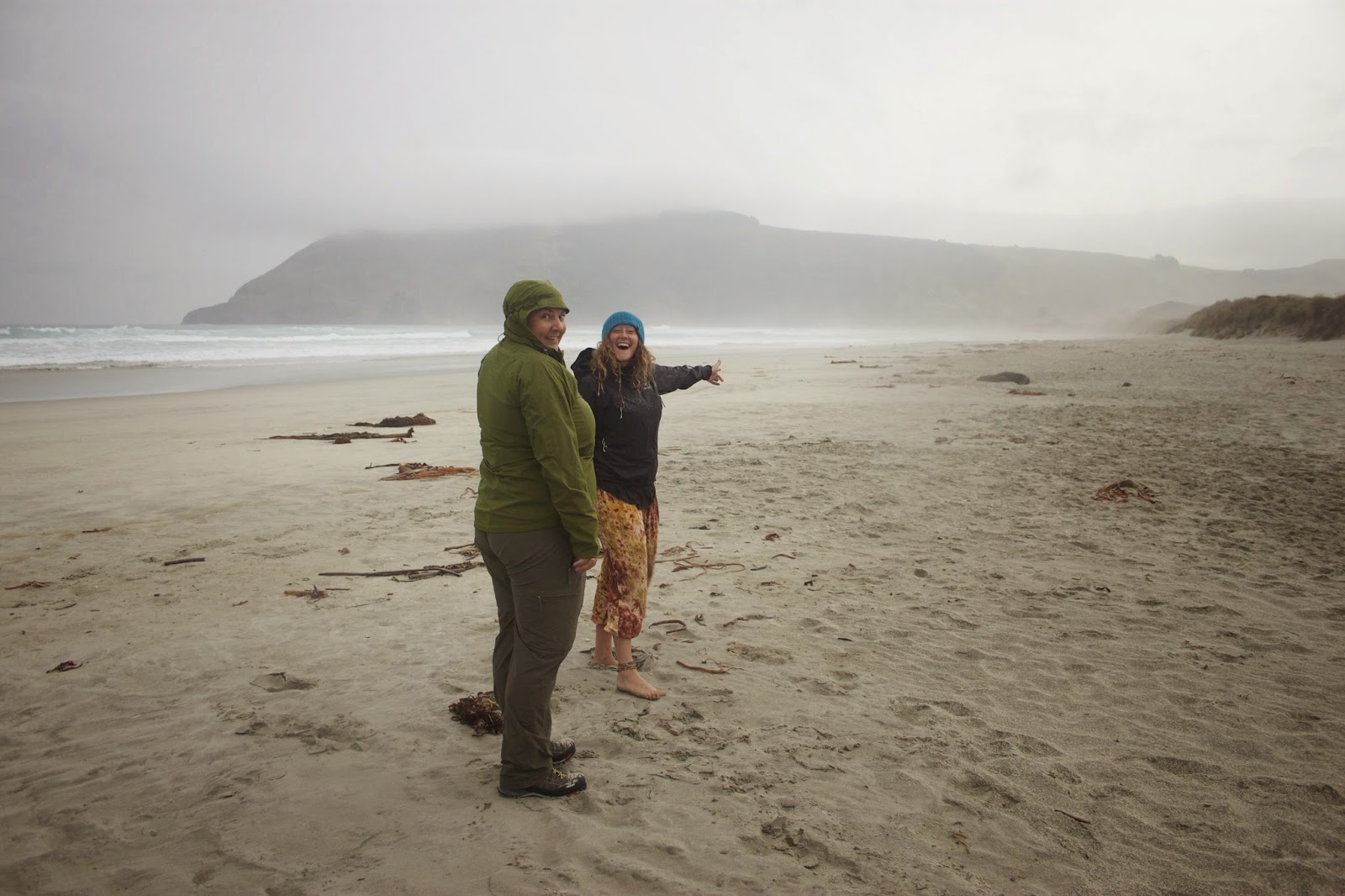 He really didn't seem too bothered to have us around 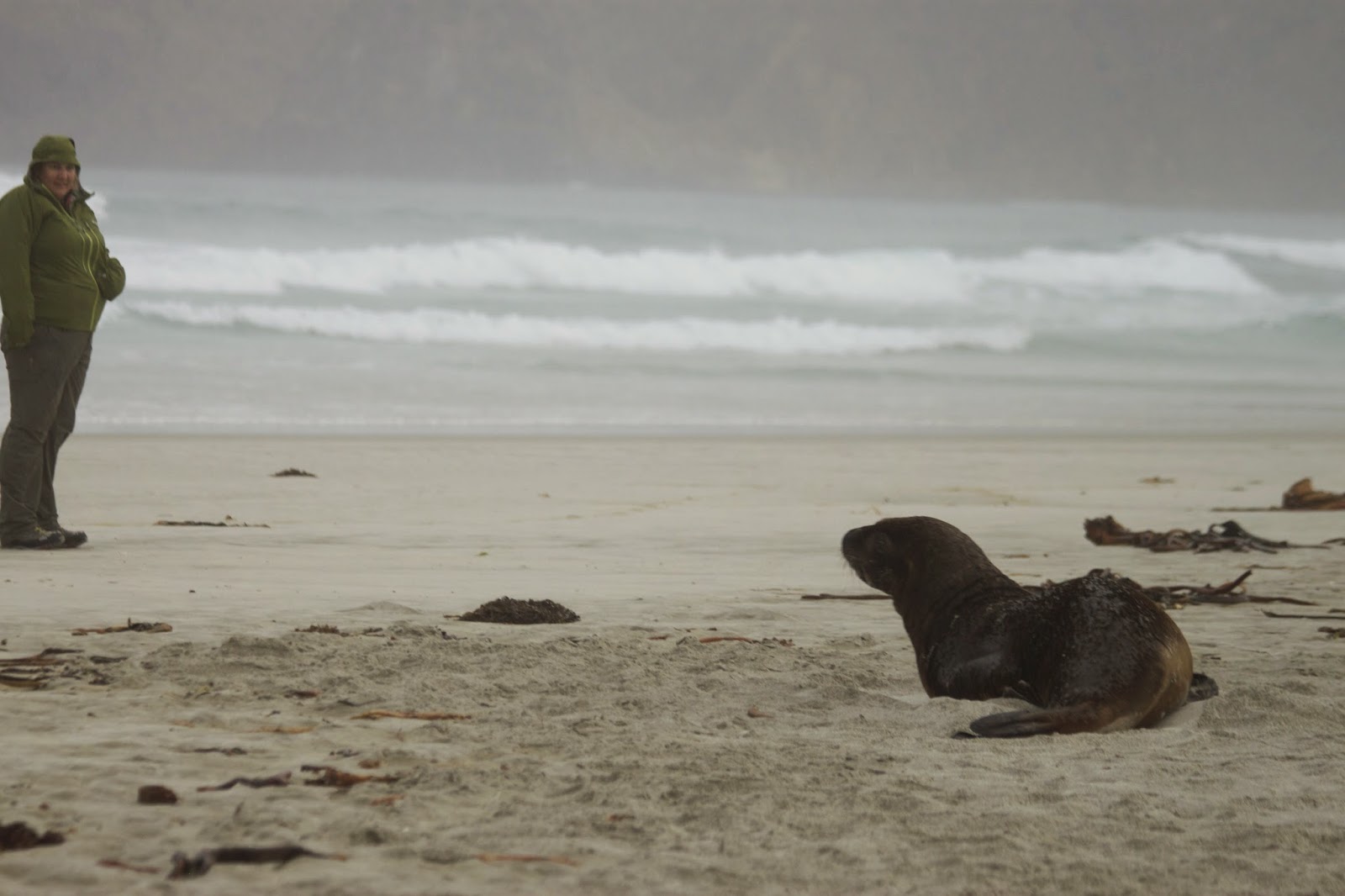 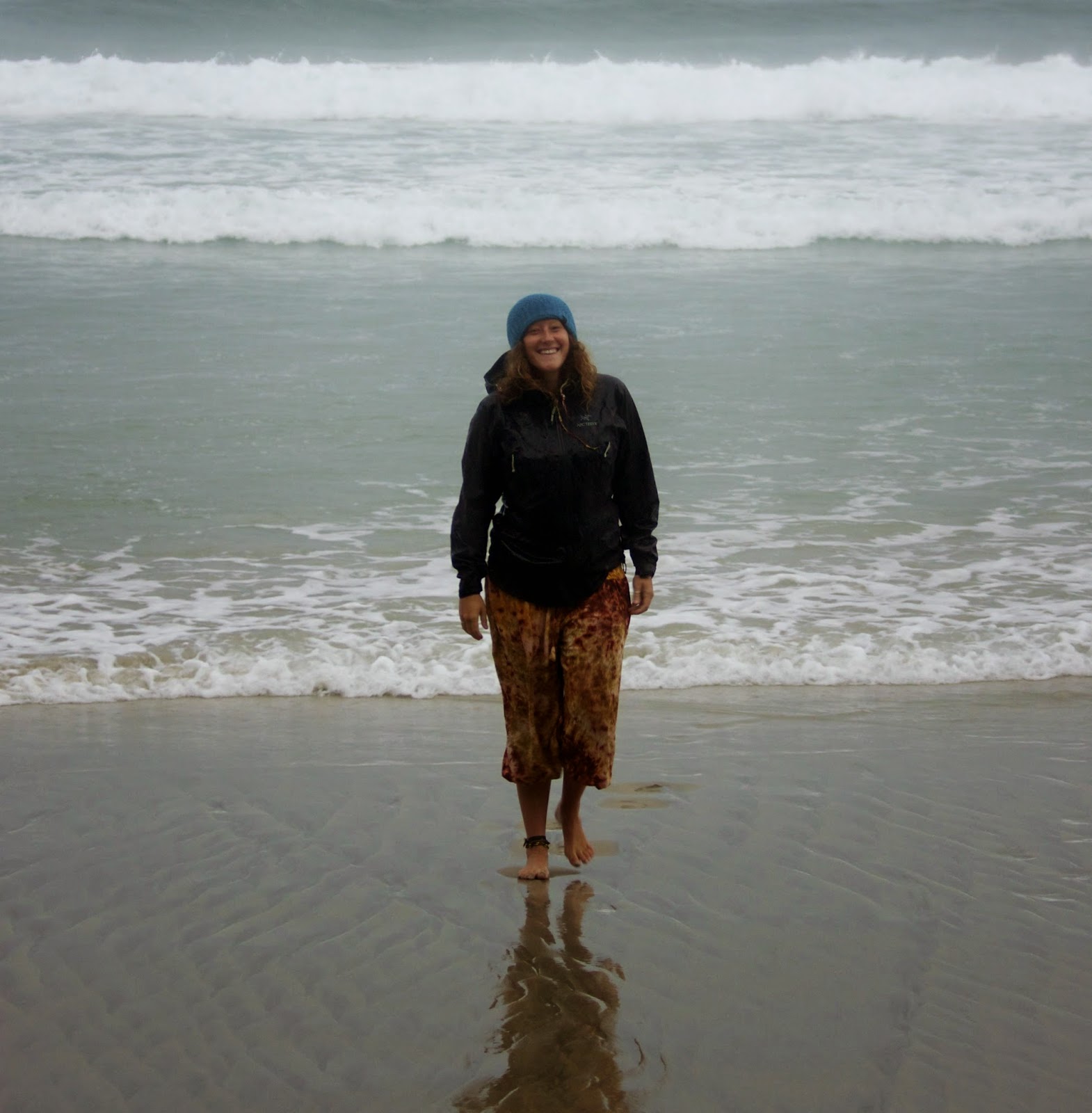 Sea lion number two having a snooze between the boulders. Sea lions prefer sandy beaches whilst the fur seals in the area like rocky outcrops and foreshores 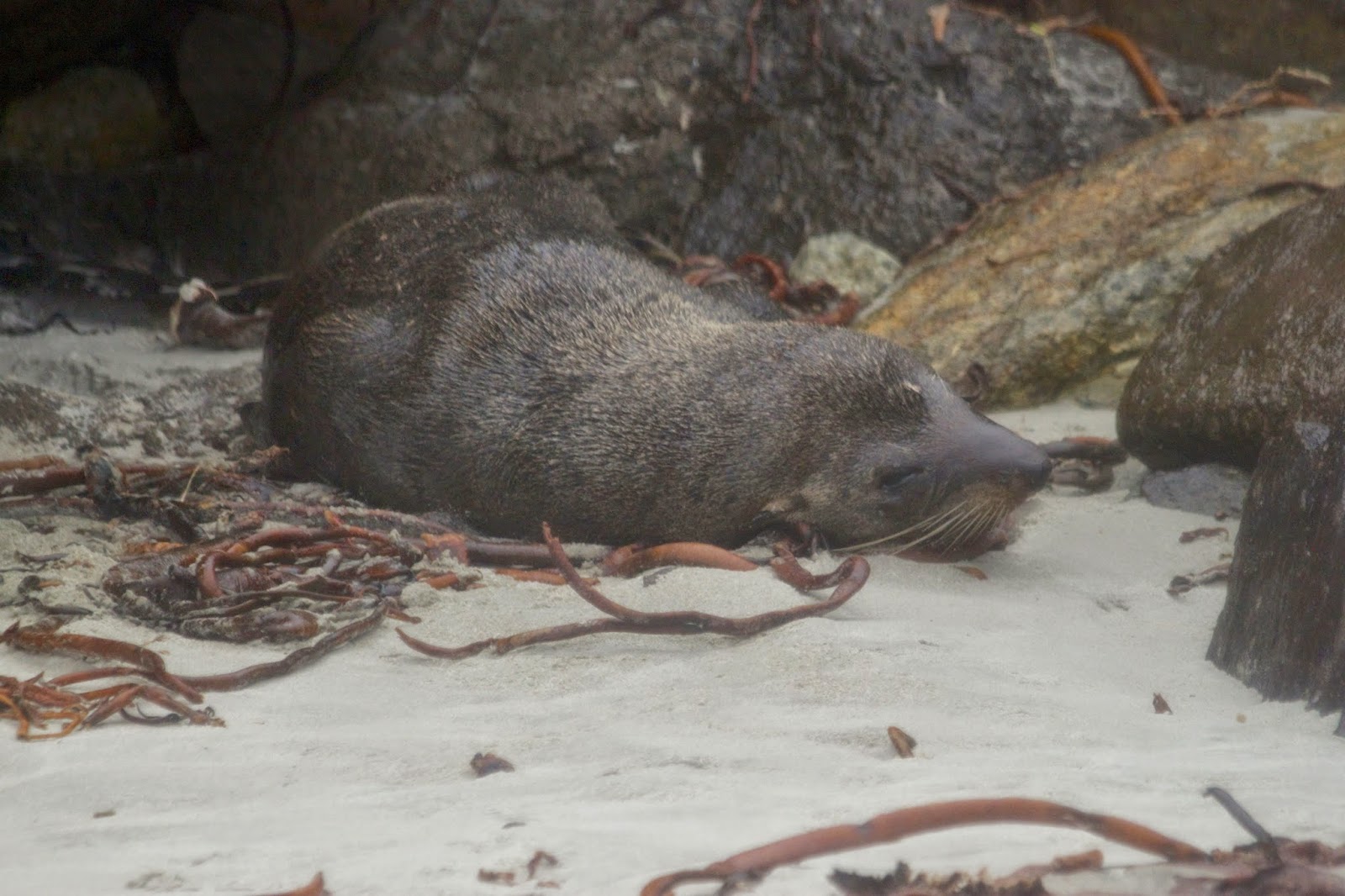 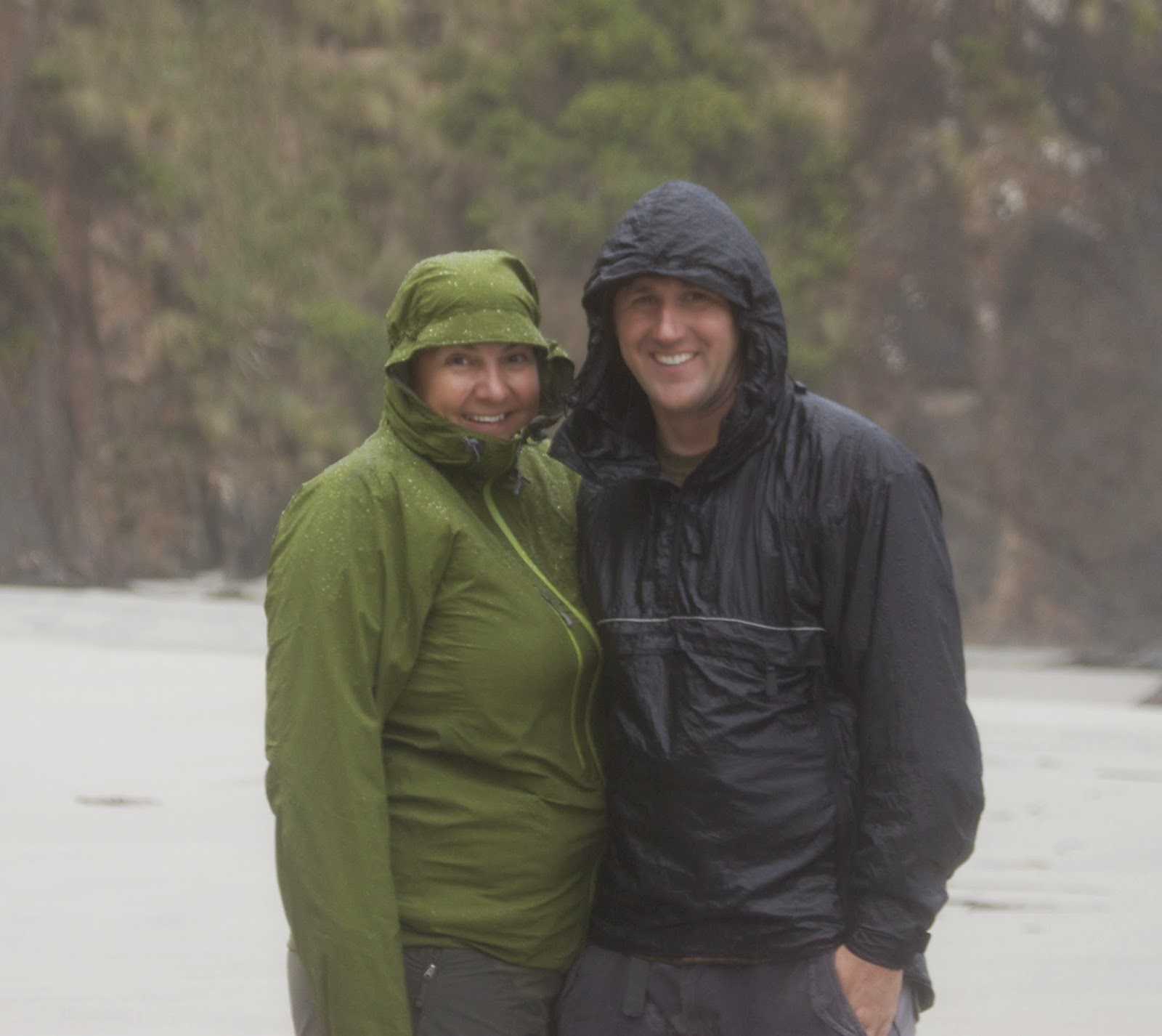 A Black Oyster Catcher,  quite a bit bigger than their pied cousins 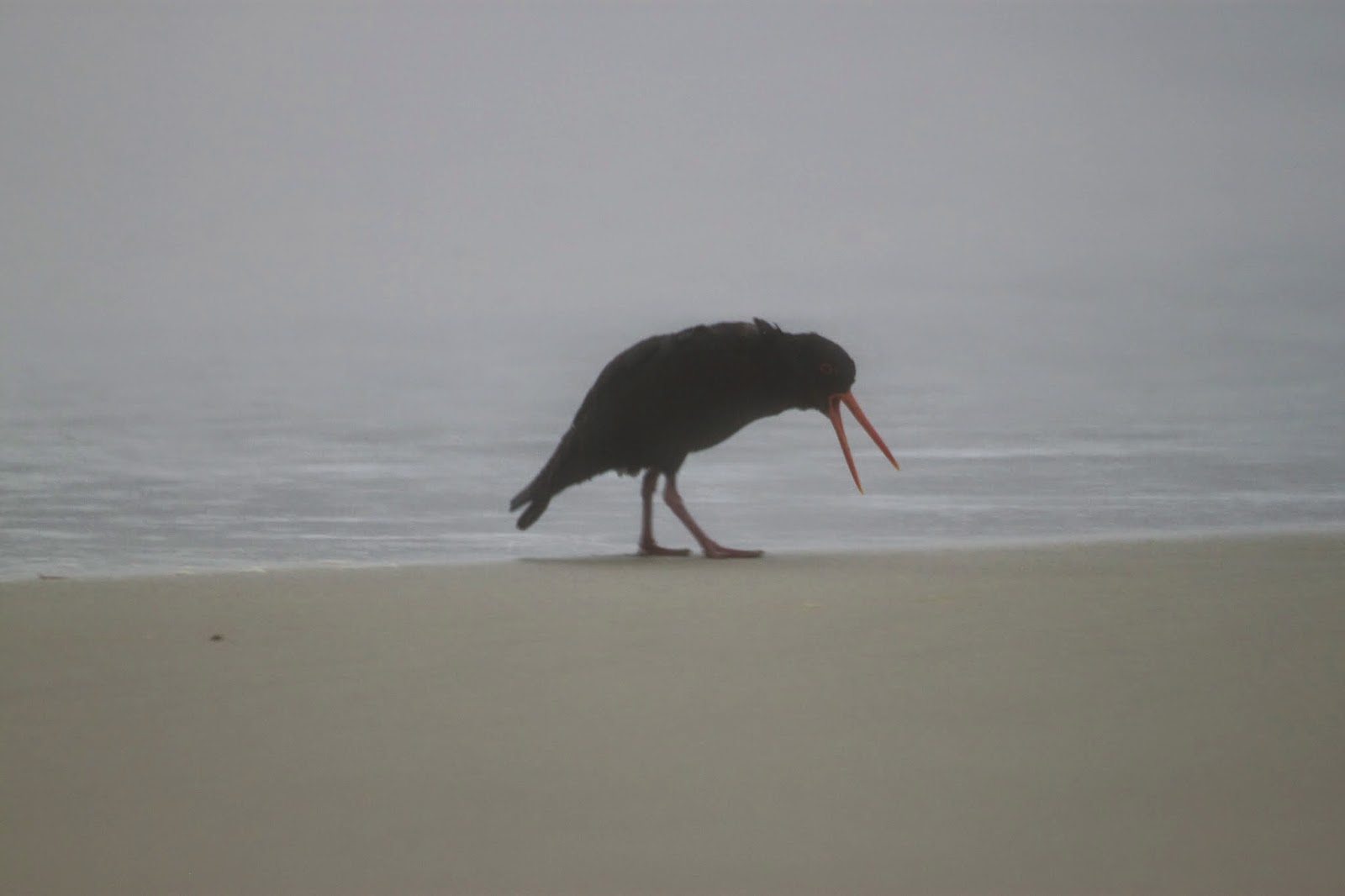 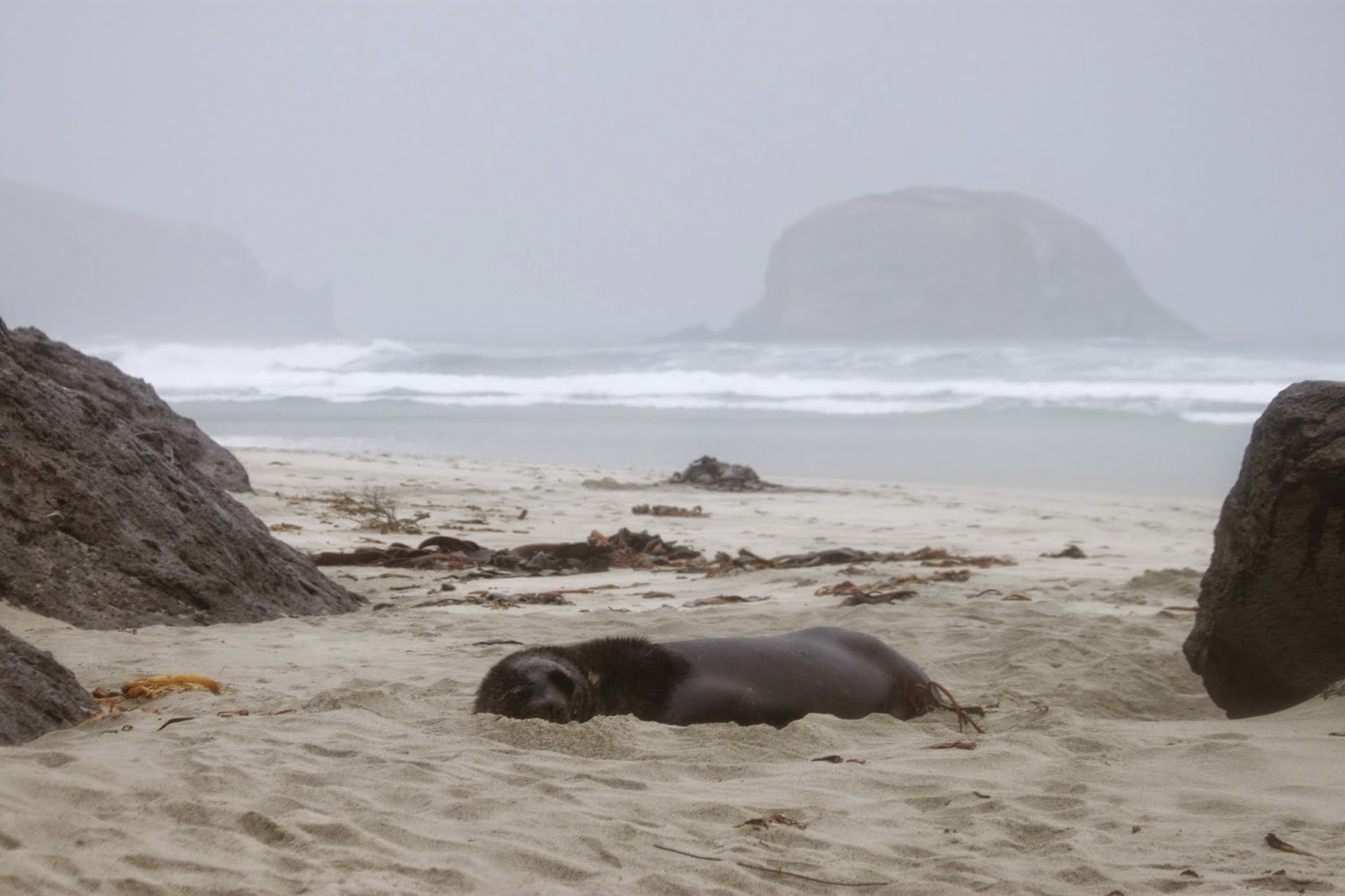 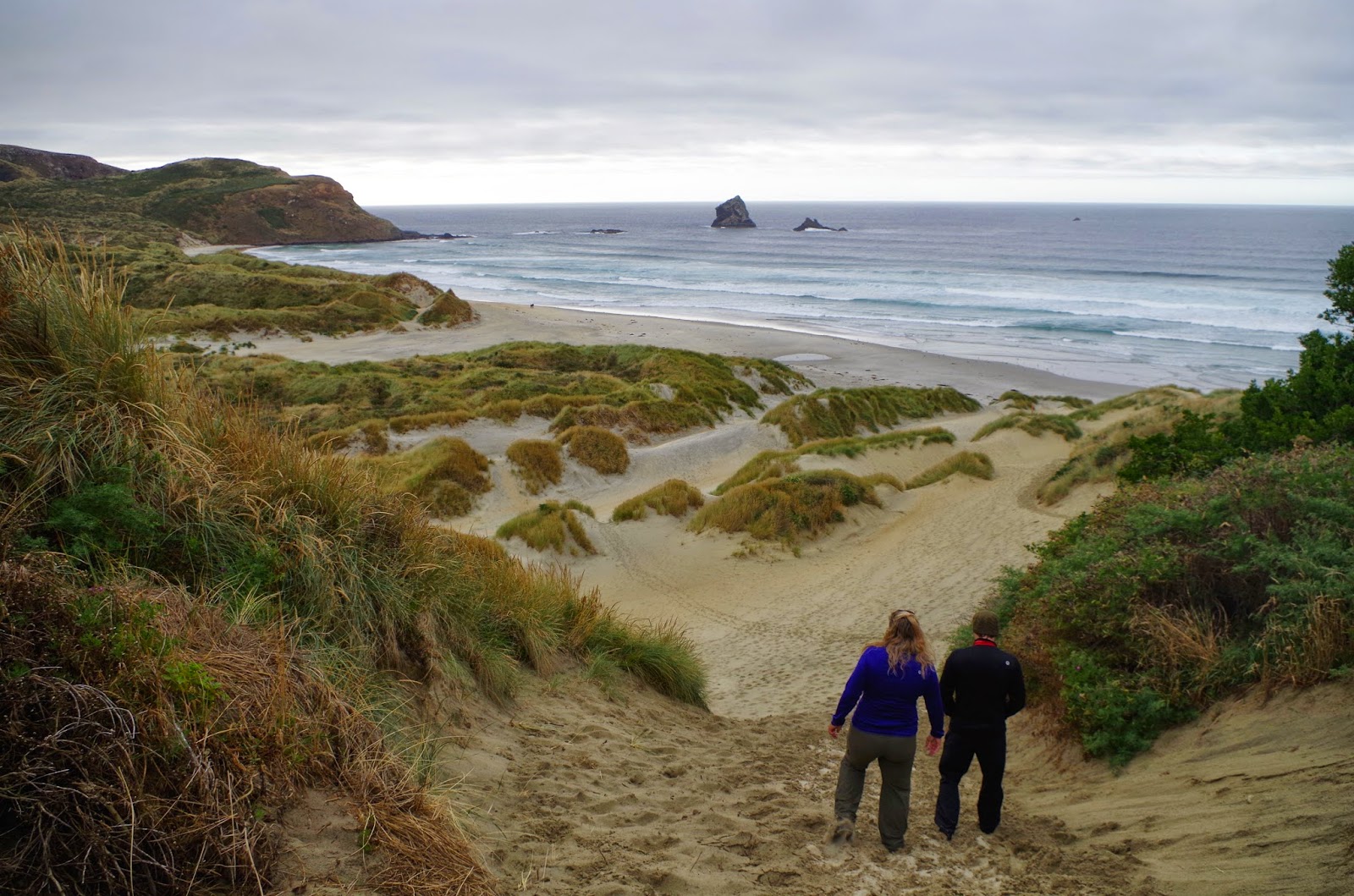 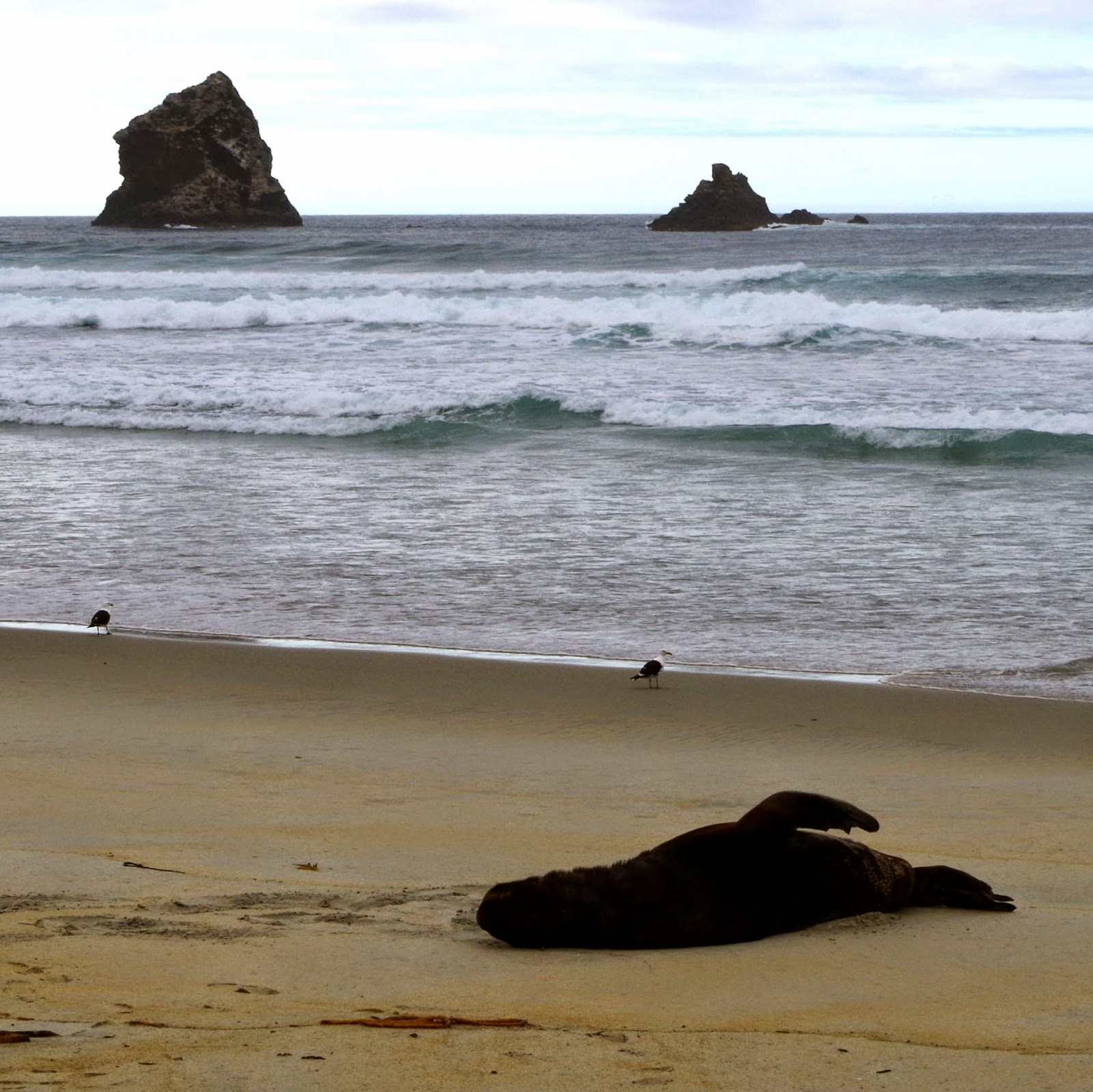 This huge male seemed happy to see us - hug anybody? 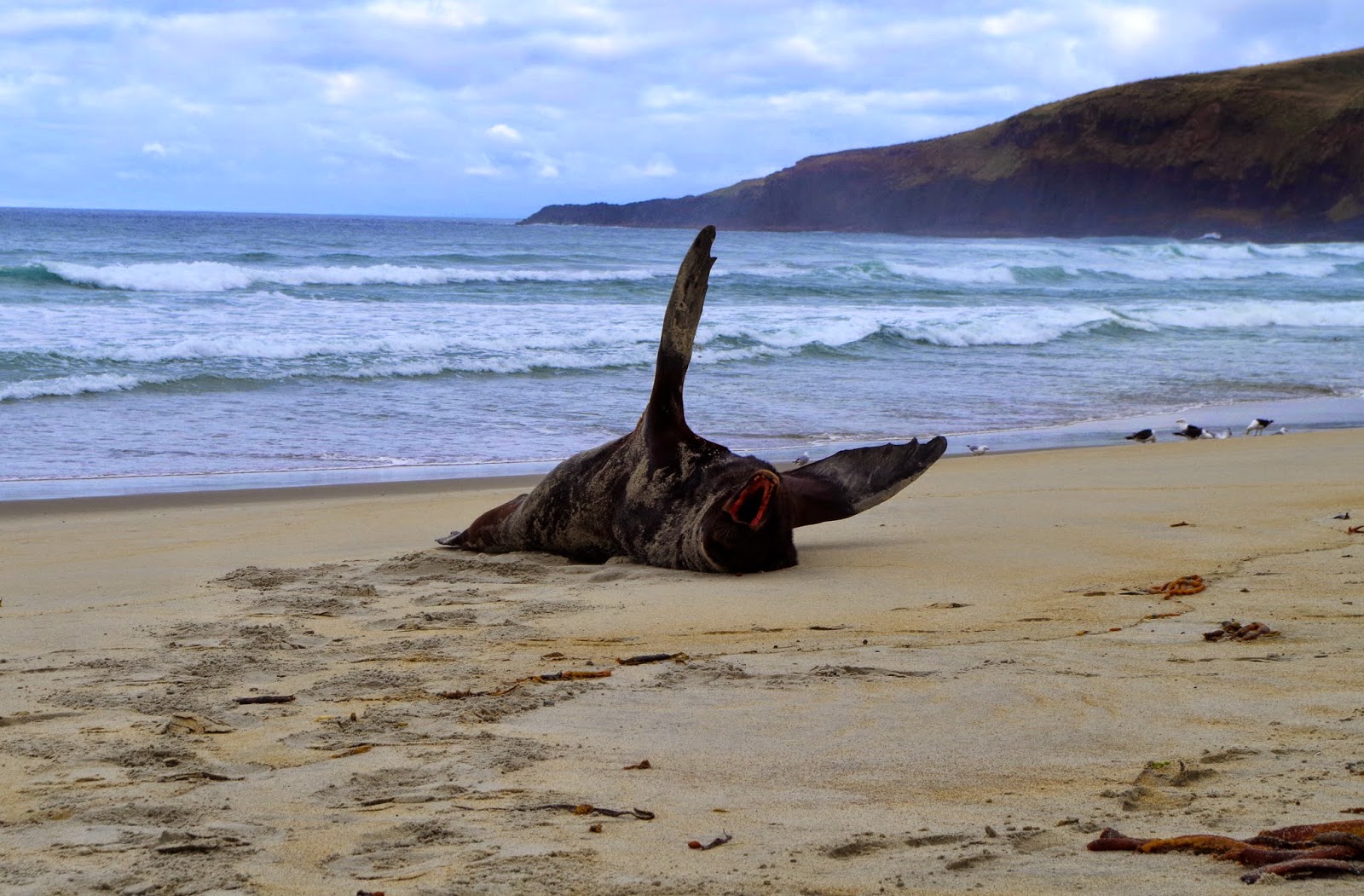 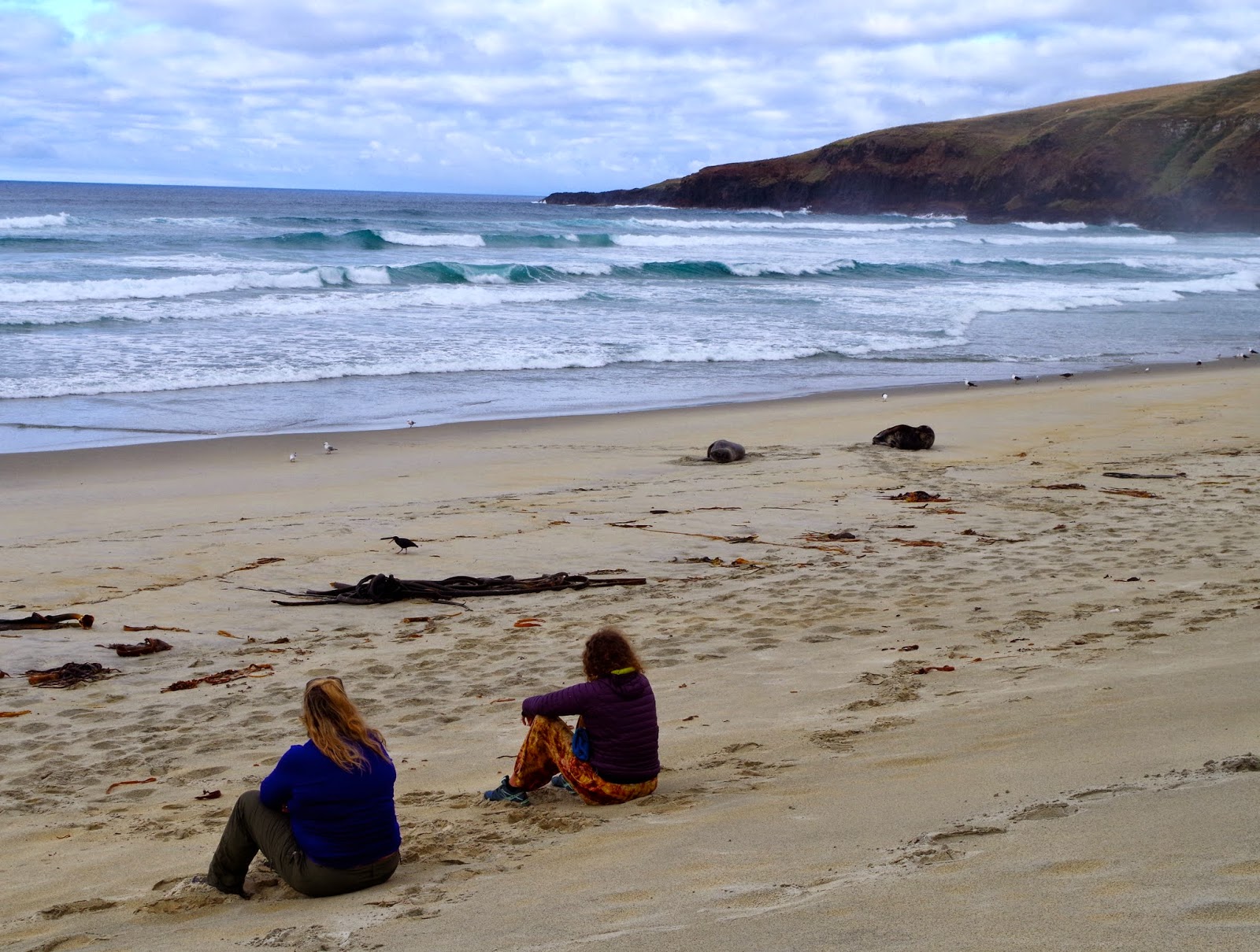 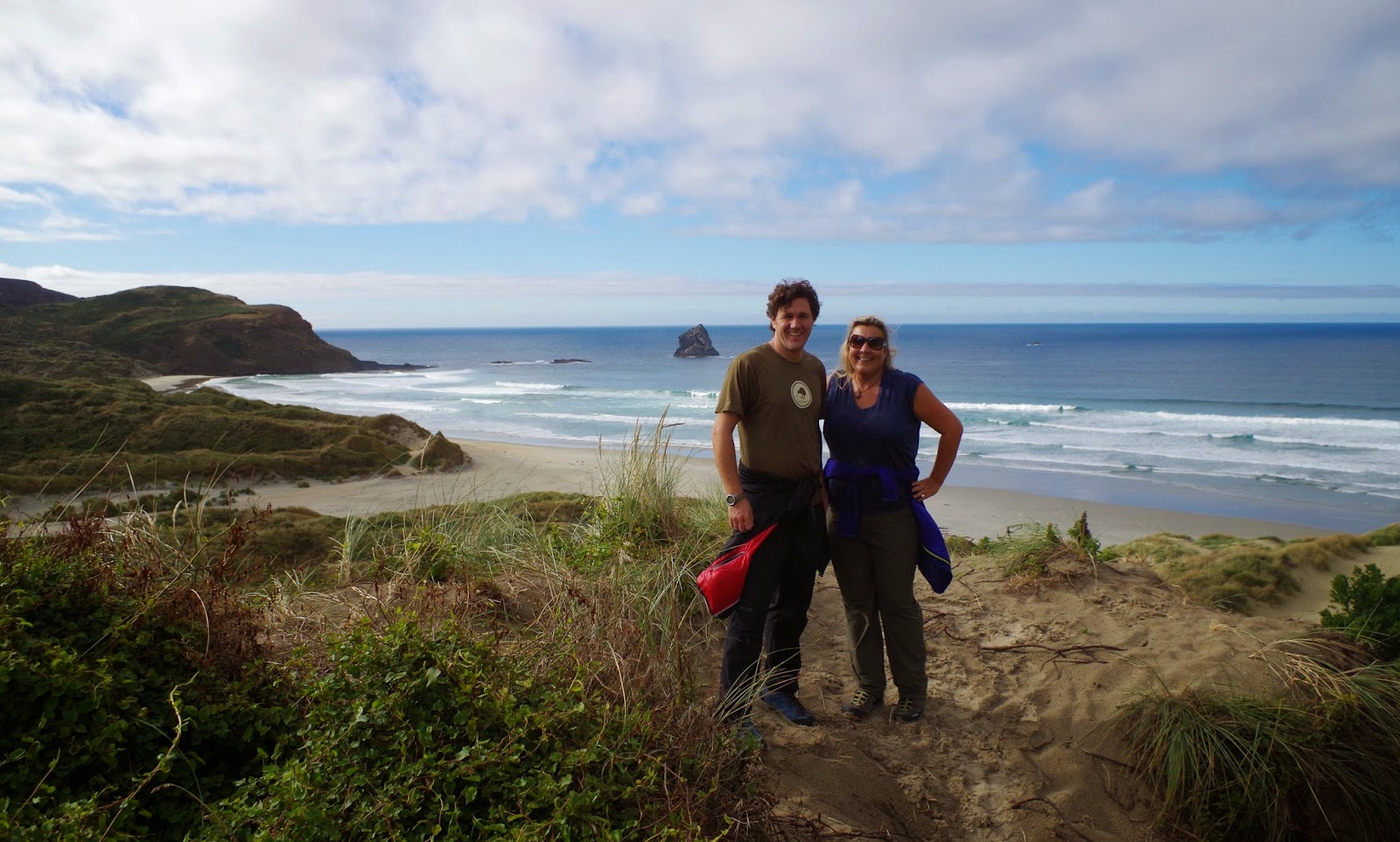 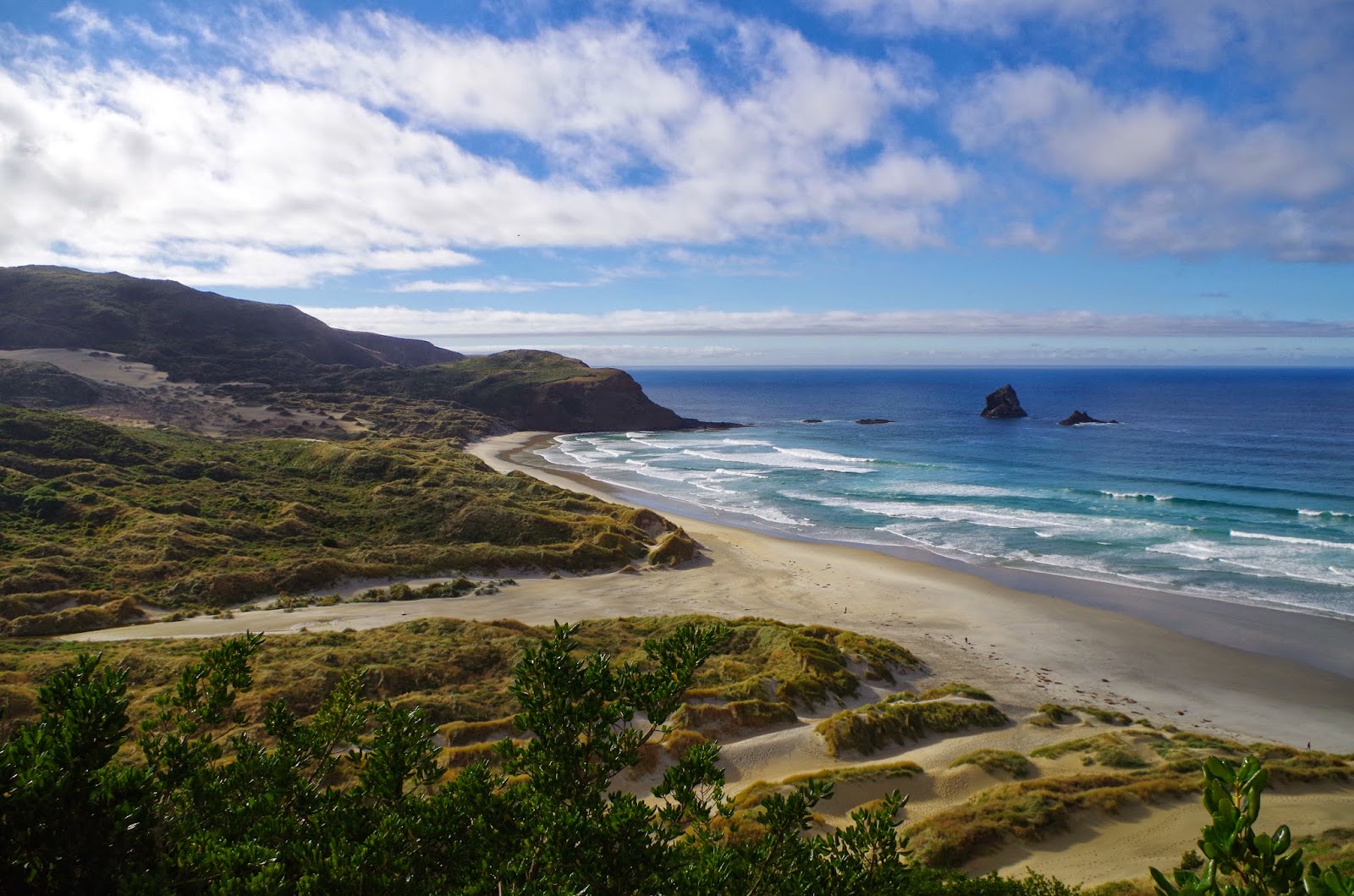 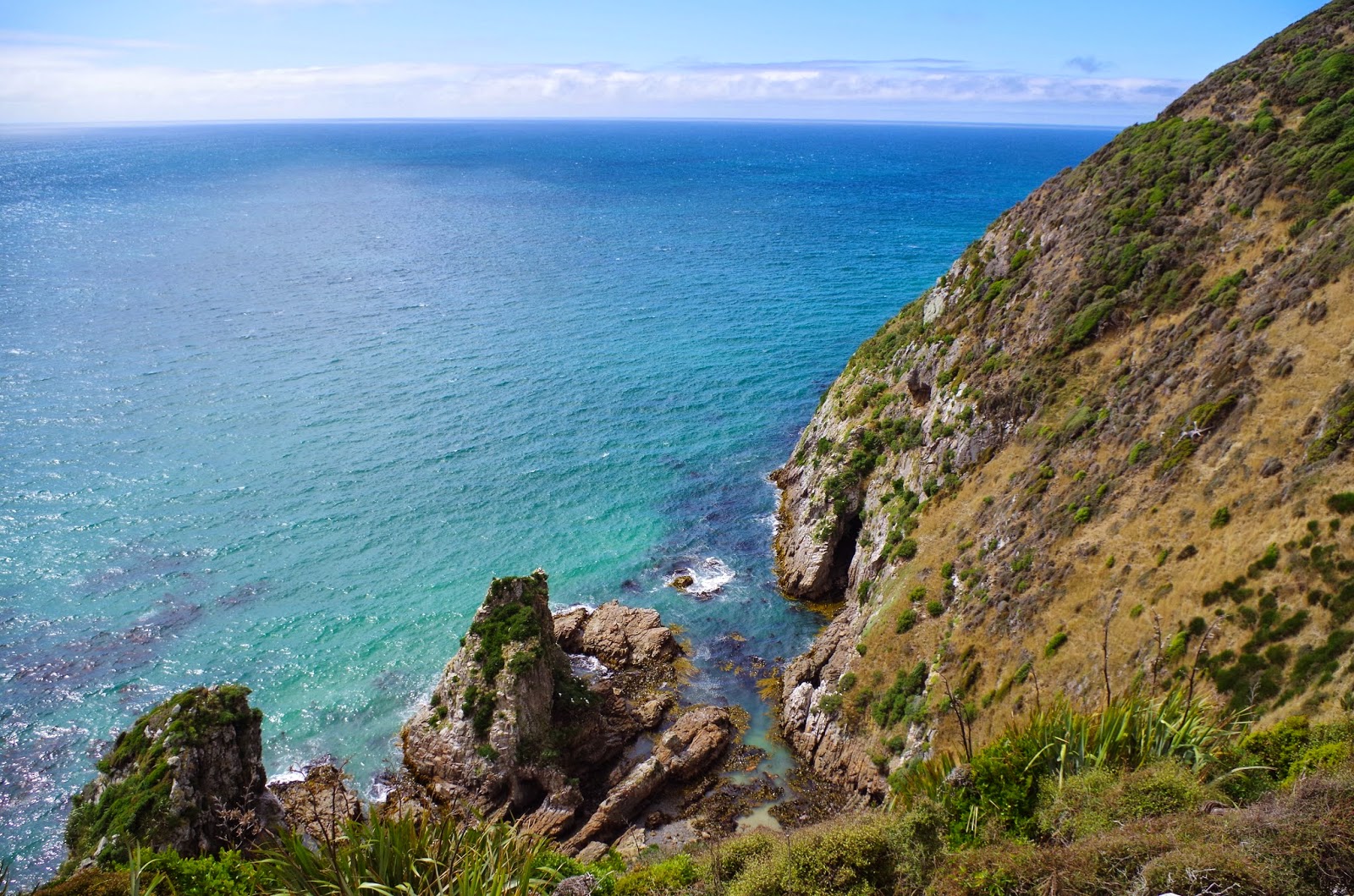 Sarah, Abbie and even more nuggets beyond! 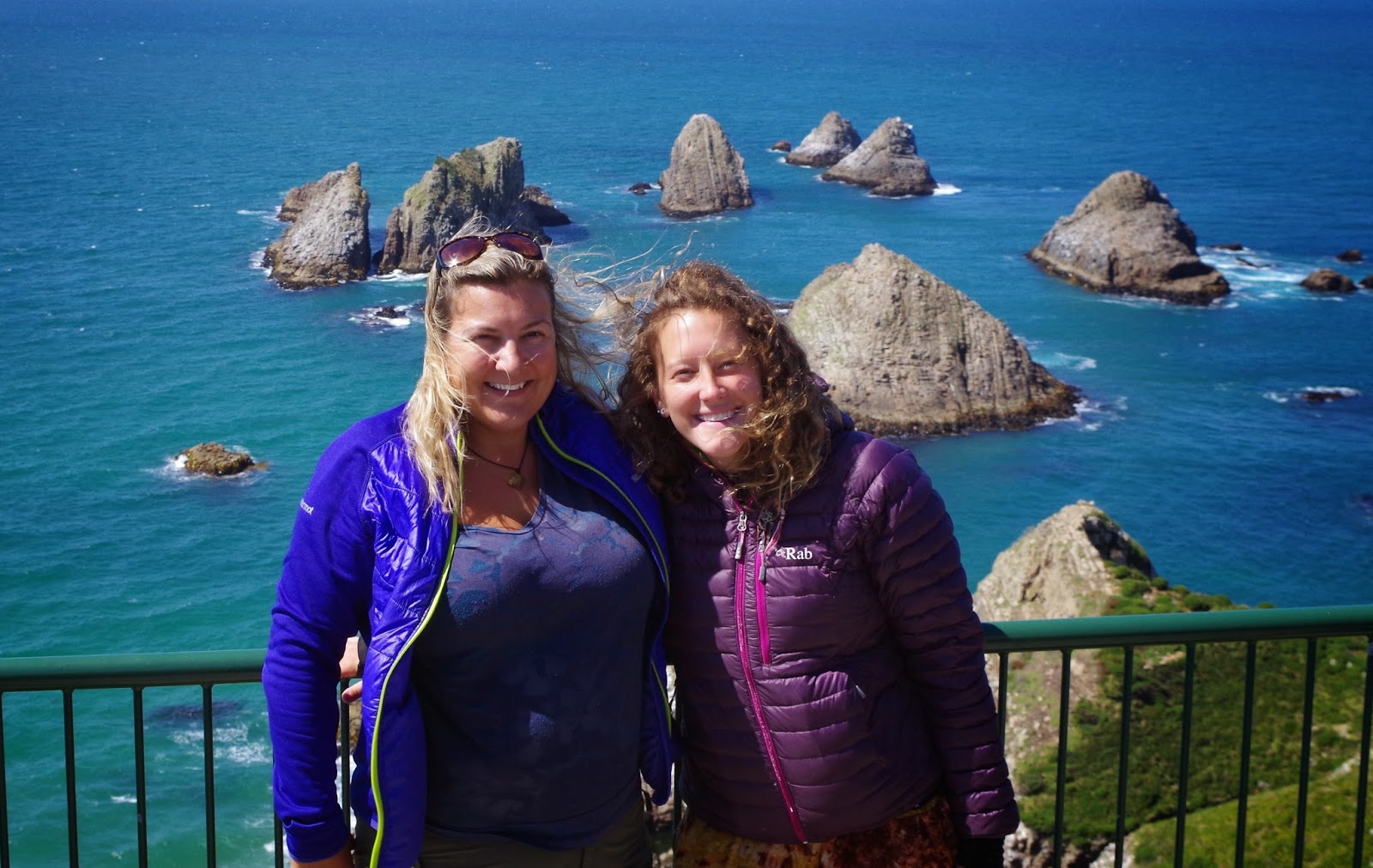 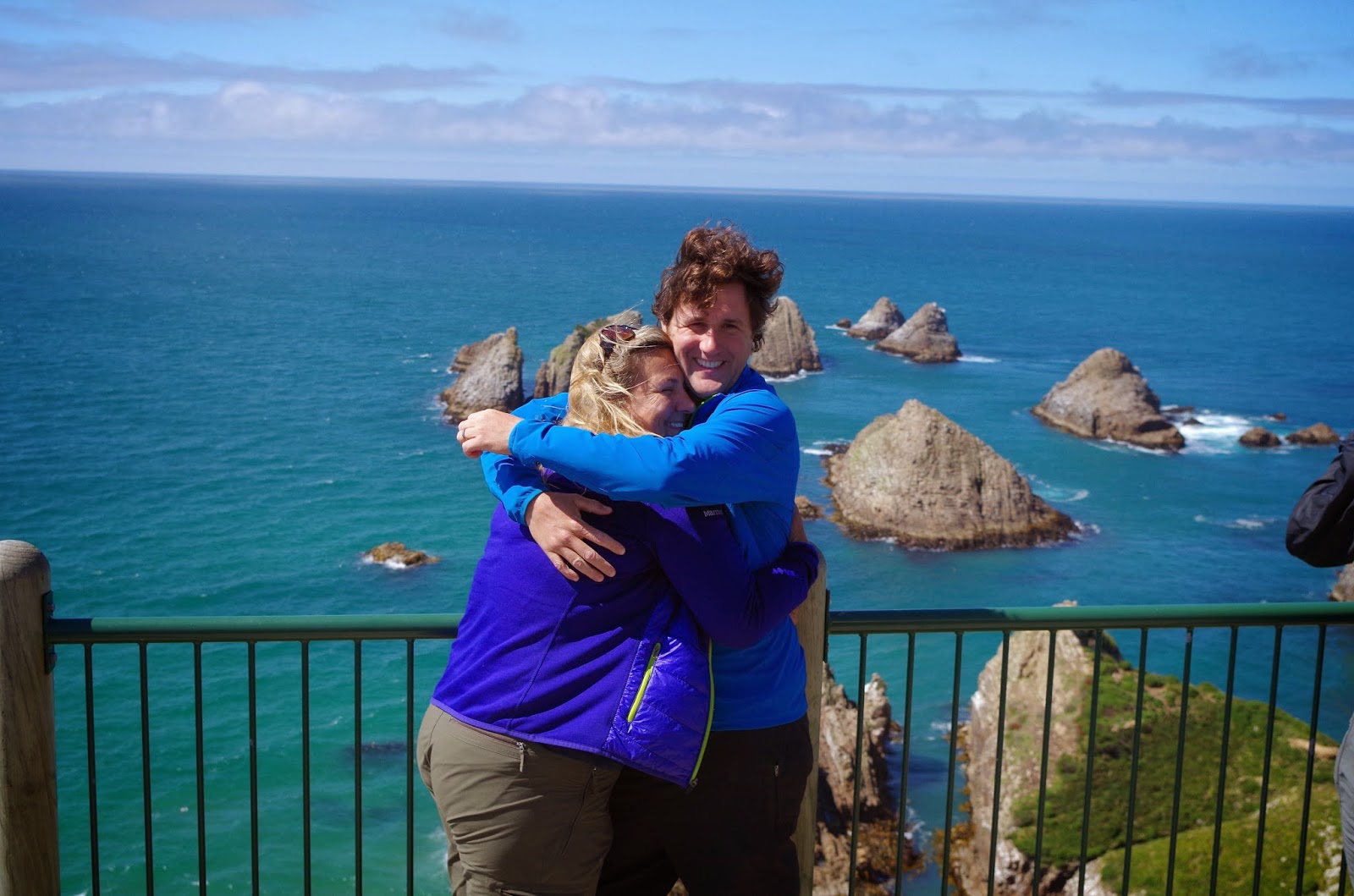 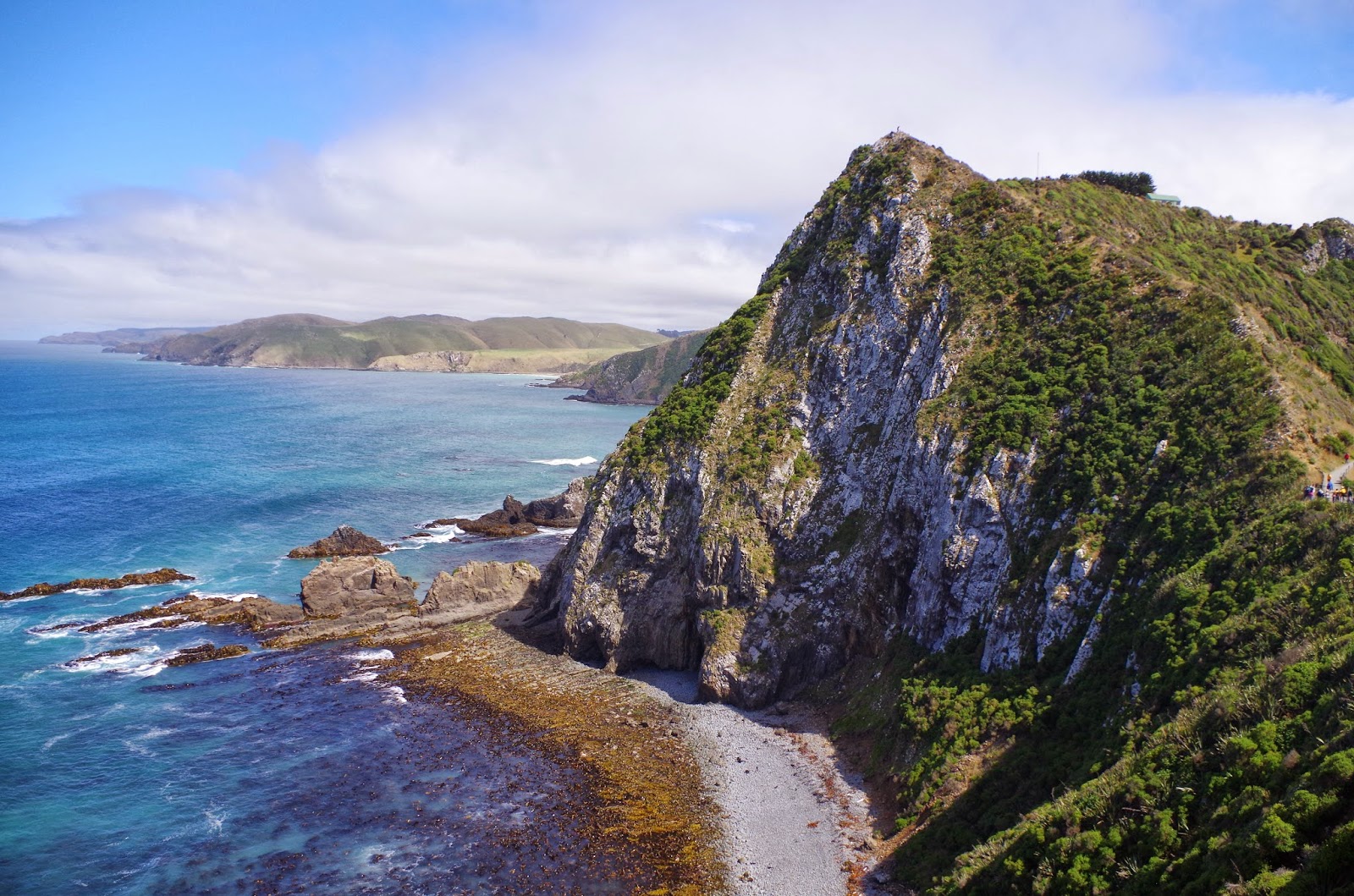 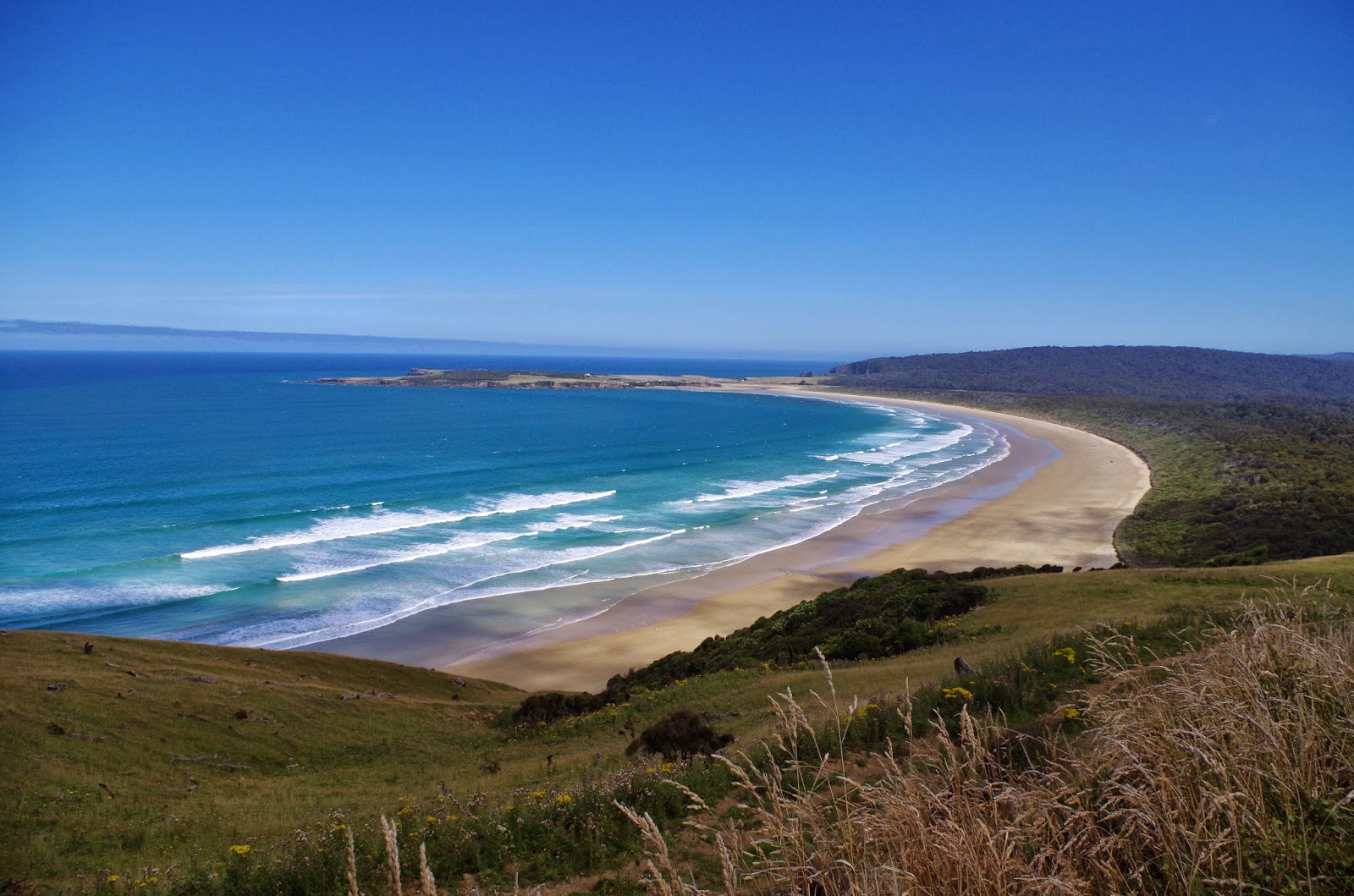 Sarah sure misses her fossil collection back home. Getting acquainted with a petrified tree! 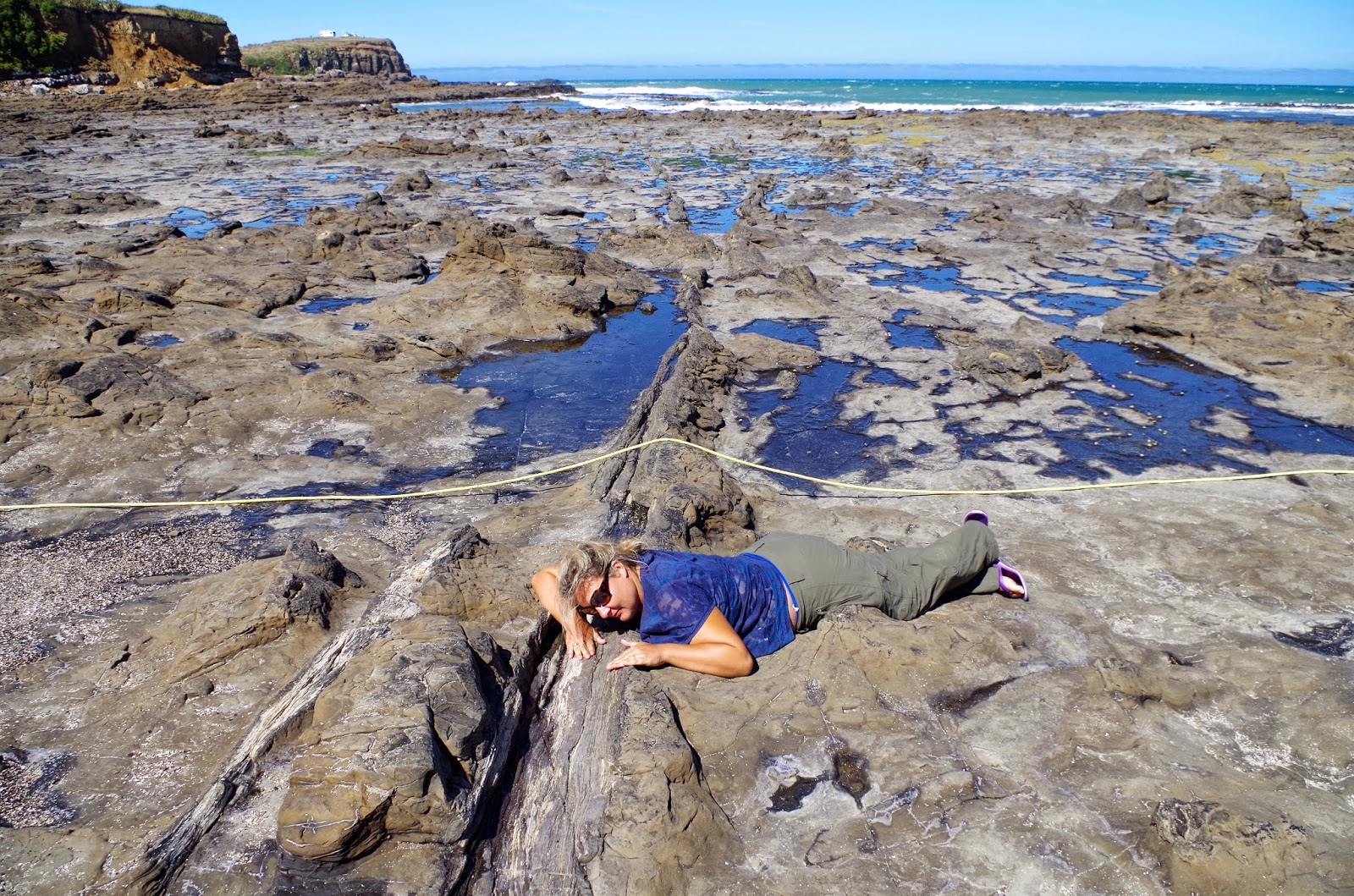 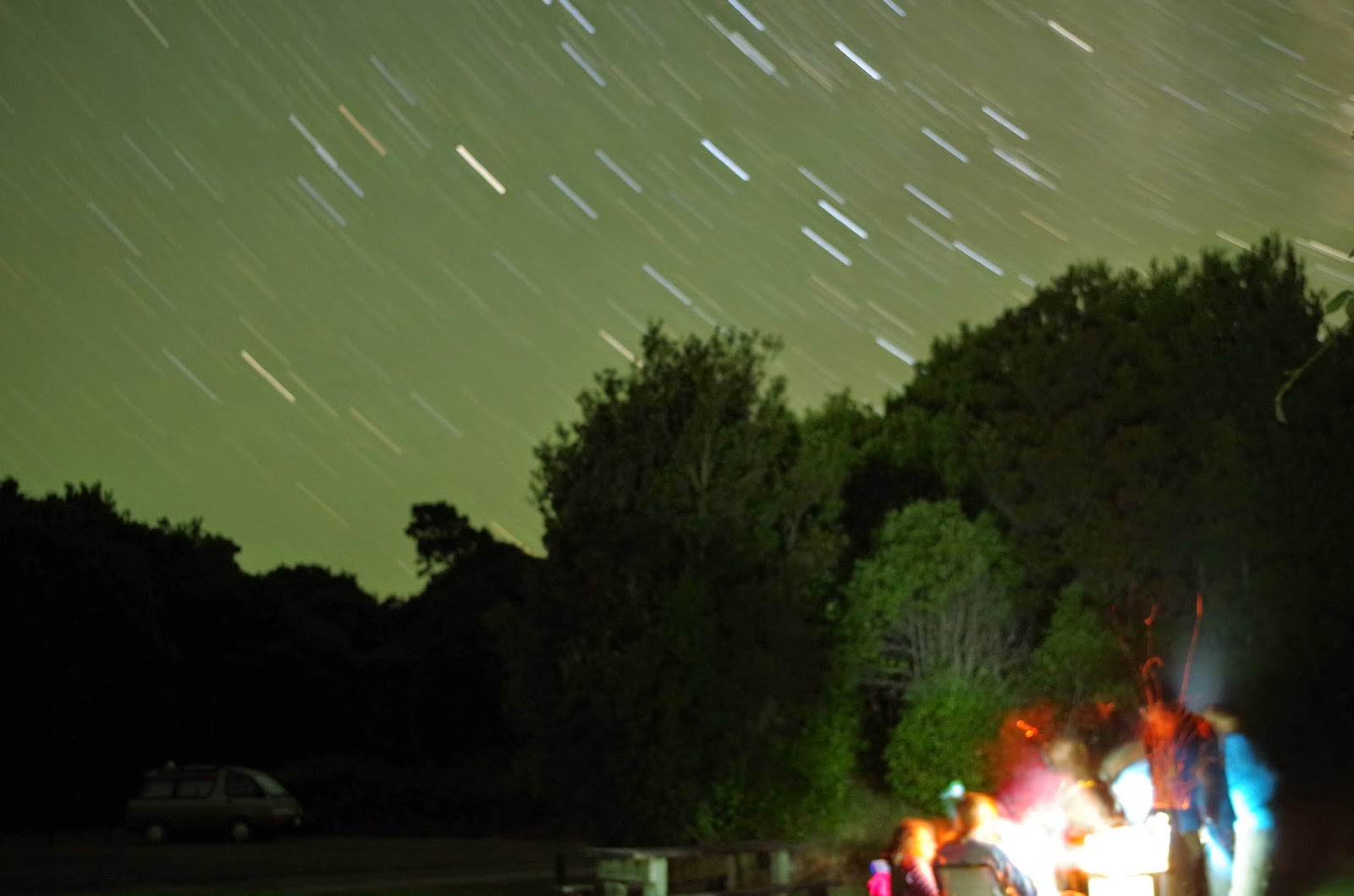 Traffic jams on these New Zealand roads are a nightmare! 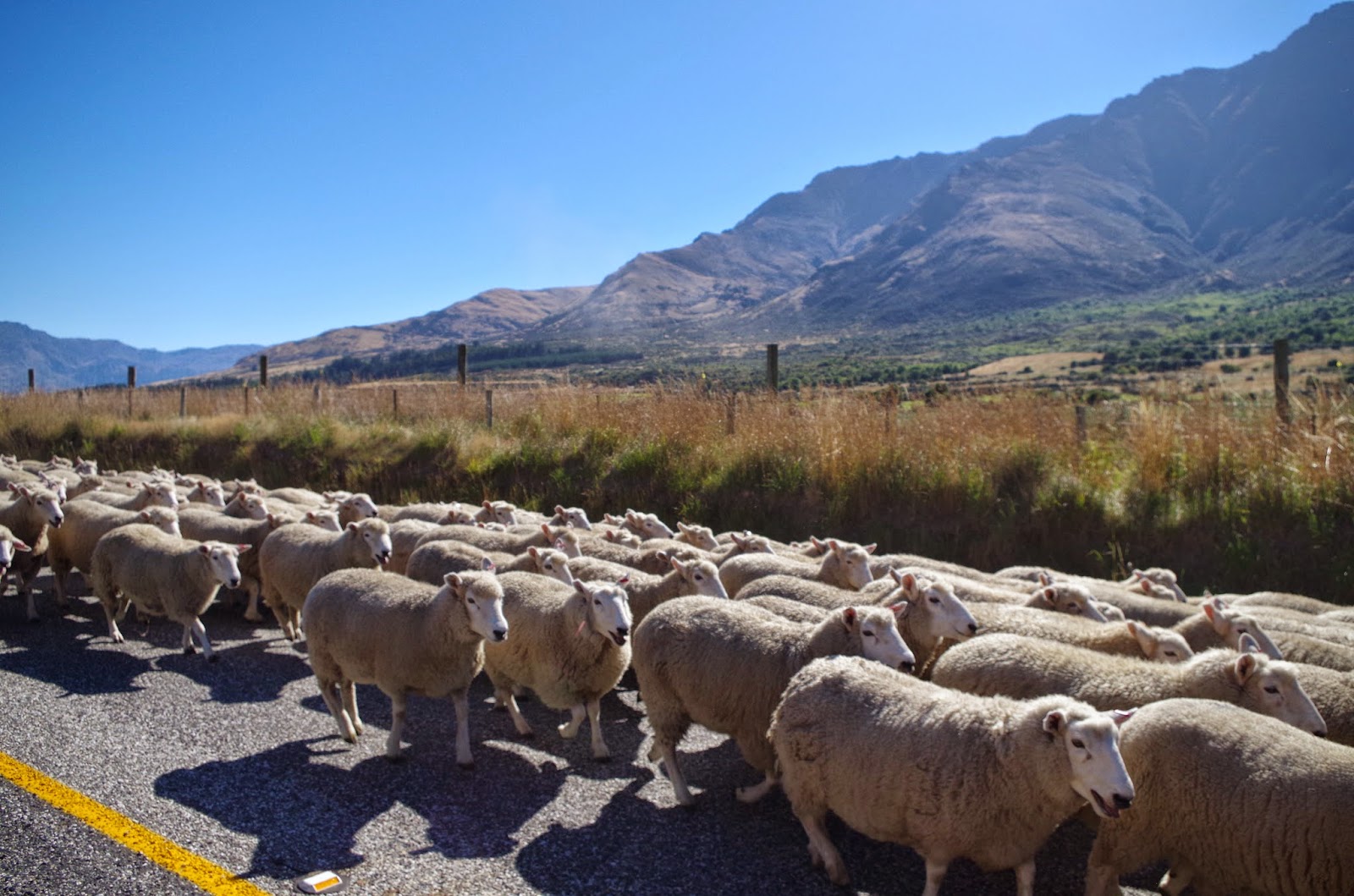