On Boxing Day we realised we would soon have no place to roost. They say that a positive attitude is a lighthouse for the hopeful and so we beamed onwards. After searching fervently on-line to no avail our light began to fade. Everything seemed booked up on the island. We engaged the services of the hotel reception staff, yet each request for help was met with a smiling countenance. It was plausible that all accommodation was booked and we would have to depart Koh Lanta tout-suit! Eventually with the help of the hotel manager we managed to find 1 room down the coast.

The restaurant opposite our hotel had been recommended to us for their fantastic fresh fish.  The three of us enjoyed a huge red snapper coated in sweet yellow curry with steamed rice and spinach-like accompaniment. The restaurant was busy and a couple from Zurich joined our table. They were a humorous pair and we were all in good spirits and spent the whole evening in fits of laughter.

The following morning the hotel had found us a second room, albeit further south. Pleased by our luck we set off to spilt locations.  That evening we re-grouped and following Kitty's advice we tried 'Time for Lime' restaurant (cookery school and animal welfare charity). The food was a five course 'tasting menu'. Bubbly Marinda from Holland joined us at our table. The food was quite fusion style, but unfortunately we had to leave early as service was slow and we had a ringside date!

The entertainment of the evening was Thai Boxing or Mauy Thai. The warm up act was a young girl of around 4 dancing around the ring evading capture and emulating the moves of her idols with an imaginary opponent. Then young willowy boys, about 9 years old, started the evening off first on the card.  There was lots of kicking, less punching then I expected, and a good deal of kneeing. Fight categories were by weight, which made for some interesting matches i.e. Giraffe v. Buffalo. As the night went on more muscle-bound guys went their five rounds in the ring. There were over 7 fights on the card in total, providing a good 2 hours of entertainment.

We'd made friends with a helpful tuk tuk driver, Thee, and we'd arranged for her to collect us at the end. We were delighted when she turned up with her 6 month old daughter to join us at eleven o'clock to watch the heavyweights. She said, "there's not much else to do in he evenings".

The barman from our hotel (who we'd hired the tuktuk from on Christmas Day) also rocked up for a sly bit of gambling after his shift.
We decided that Koh Lanta was too busy and set our sights on a move to the National Park of Khao Soak. 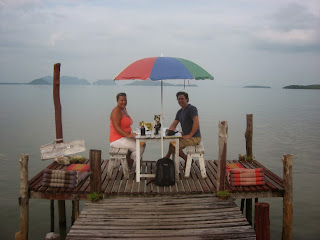