Khao Sok is a very green place, at an elevation of around 1000m the temperature is very pleasant (no jumper required) and there’s always a gentle breeze that keeps the perspiration at bay. Located in the west of the Surat Thani province, it covers an area of 738 sq km. It is a spectacular limestone karst landscape studded with many caves, pinnacles and steep ridges towering over almost pristine tropical evergreen jungle, one of the oldest jungle habitats in the world. See www.khoasok.com for lots of info about this national park.

We were keen to get out to explore our surroundings and booked an elephant trek and jungle lake tour on arrival for the next two days.

We were particularly uneasy about going on an elephant trek. The idea sounds wonderful to us westerners, but elephants are wild animals and it seemed very wrong to be encouraging elephant domestication for tourism which must have included breaking its spirit earlier in its life. One can only image what cruelty a baby elephant must endure to give up its spirit.

We looked at the elephants for signs of recent marks left by the sharp sticks and chains sometimes used to control and restrain them. The most sensitive part of the elephant we had read were its ears so we inspected these. We were quite unsatisfied that our cursory glances could pick up any real signs of abuse, but, that said, the elephants all looked in pretty good condition, with few marks and seemed well fed. We asked about the elephants background and was told that they were ex-logging elephants (logging was banned in late 80s in Thailand) and for the 8 months they were not carting tourists around they were hired to clear out rubber tree plantations and move things for the villagers. How true this was we couldn’t tell.

Once on the elephant our concerns, rather selfishly, melted and we enjoyed every minute.  The trek itself was good fun; our mahout seemed friendly, gentle and walked beside us, not touching the elephant. Yet, we feared that just a wave of the arm would bring memories to her of cruelty. We'd brought a very large hand of bananas with us and fed them to our lady. She was adorable. We walked for about twenty minutes then dismounted and she rested in the shade for ten minutes before we made the trip back. We twice crossed a river and she was allowed to stop for a drink.

Once the euphoria of the trek had melted away we were very torn about the whole thing, if tourists were not supporting these beast without a logging job, they would be destroyed. But by supporting them we were sending a message that tourist elephant trekking was good business and undoubtedly baby elephants would in time have their spirit broken just for the tourist trade. We won't go elephant trekking again, but decided a way to rebalance our conscience would be to try to undertake some volunteering to help the elephants. 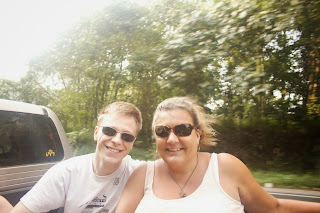 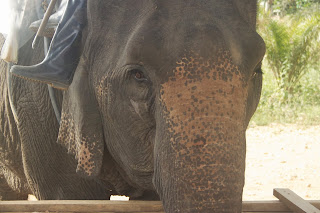 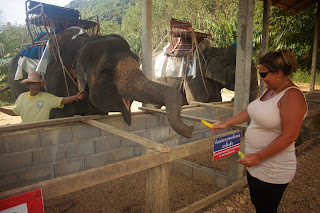 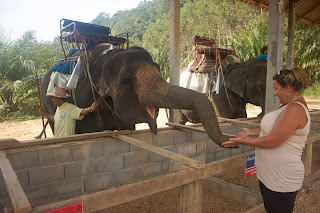 Working hard in the heat you can see the blood is close to the skin on the ears, their primary method for cooling down 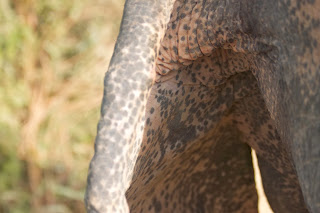 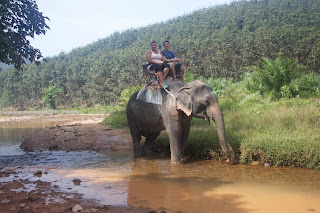 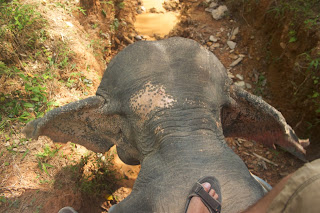 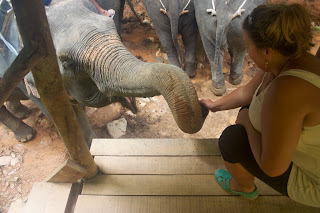 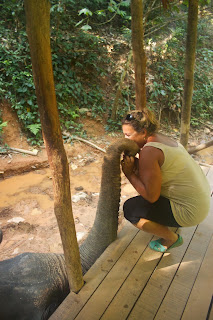 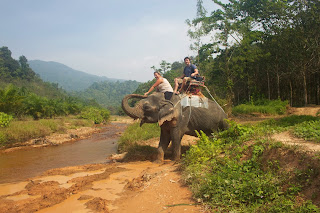