Hsipaw is a compact and hospitable town in the Shan province, 200km north east from Mandalay and about 100km from China. Hsipaw is pronounced by locals as 'See-paw' as the old town used to have four (see) quarters. It was the Shan Royal City of the Shan province, the largest of the Burma states. It was once a very powerful area but the disappearance of the last Shan Prince and years of harsh oppression and seizere of land, assets and people has taken its toll.

After the city and pagoda-ville of Mandalay and its surroundings, it was good to be back in the countryside. On Friday we strolled around to get our bearings and chanced upon a man who made sandals, buckets and rope from used car tyres in his little workshop. Although he spoke no English, or us Shan we really enjoyed learning about his skill. Children and adults alike greeted and waved to us as we walked around the small town.

On Saturday 18th January we were served our breakfast of rice and a fried egg on the terrace. We wore many layers and wooly hats as we could see our breath! Due to the elevation it was colder than Mandalay in the morning, with a dense fog. We arranged a half day walk with a local Palaung guide called Ausang and left about 8:30am.

We walked out of town, crossed the rail tracks - trains from Mandalay often take all day to arrive and locals joke about which days train it was that finally make it to town. We visited a noodle factory. The guys were so cheerful and gladly showed us the process of crushing the rice and then putting it in a tank of water. Next, the now softer rice was then crushed again and mixed into a paste. This paste was steamed in large tongue slabs, which when cool were put through teeth-like rollers to create the long wet noodles. Any noodles which escaped after being cut where collected in a basket and donated to any poor who came asking for them. The noodles were dried outside and then steamed again to bend into a package size block of noodles. They were for the Chinese market.

Then we walked out into the fields. The weather was like a British summers day, and the air smelt so fresh. A variety of produce was grown for the local market in lozenge and lobe shaped paddy-like fields with heightened banks to keep the water in. During our trek we saw rice, kale, cabbage, onion, cauliflower, garlic, tomatoes, maize, corn, lettuce, aubergines, peppers, sunflowers and sesame for seed oil, peas, - pretty much everything you need to be self-sufficent. Fields were toiled by men and women with buffalo or with the "Chinese buffalo" - a sort of motor driven rotator. Our guide told us a buffalo cost about $800 (more than a year's wages) and would be used for about ten years, then the owners would take it to the forest and release it to live out the rest of its days. They seemed very docile with their owners.

It is common to see someone eat a packet of seeds or crisps and drop the rubbish. We asked what the locals thoughts were about plastic litter. Ausang explained that no one minded the litter, but a friend of his who was also a tour guide noticed the foreigners picking up the litter he had dropped on a trek and so now did not litter. Unfortunately we could not see this becoming a trend.

We visited a small crisp factory and they were amazingly tasty. We bumped into Bill, a friendly guy from North Carolina who was on a trek with a guide too, the only other white person we had seen for a while.

We walked on past the tomb of a Chan King and Queen who died 60 years ago, unfortunately being overwhelmed by vegetation and not maintained they were falling into ruin. We heard military artillery shelling some way off and were pleased we decided to stay in the valley rather than trek upto the hills.

A school of nuns came out of a temple and sang a song before parading to the next building. The girls aged from five to fifteen and were dressed in hews of pink. We continued to walk through hamlets of bamboo houses and fields. We came across a stupa (Buddhist religious monument of a solid hemispherical gently tapering cone) which was being rebuilt. All over Myanmar we've seen women doing construction work, generally carrying rubble in wicker baskets on their heads. They do the menial work and the men do the detailed, more skilled tasks, like laying the bricks. The group was rebuilding the stupa as the original one collapsed, revealing thirteen Buddha figures about three hundred years old. Now the stupa is being rebuilt as an act of celebration and the figures are to be displayed in a building next door.

For lunch we had some delicious Shan noodle soup and fried tofu at the village shop. Bill turned up and we tempted him to join us and try the soup, and some fried pork skin. After lunch we past bamboo basket weavers and visited ladies rolling Cheroot, a Myanmar cigar containing tobacco, vanilla, other leaves, roots and herbs wrapped in a large green leaf. It was really good to have our own guide, who we pestered with questions about the area, the Buddhist religion, farming techniques, village life and cottage industries. He was also helpful at translating signs which lead to an improved understanding about what was going on. For example a village bridge had been replaced and the sign gave details of who had donated towards the bridge and how much.

A nunnery school we passed had recently cut down a large old tree in the yard, as they needed the wood for cooking and warmth. We were struck by how simple life was and the natural beauty of the place. Returning after our five hours walk we'd fallen in love with the area. 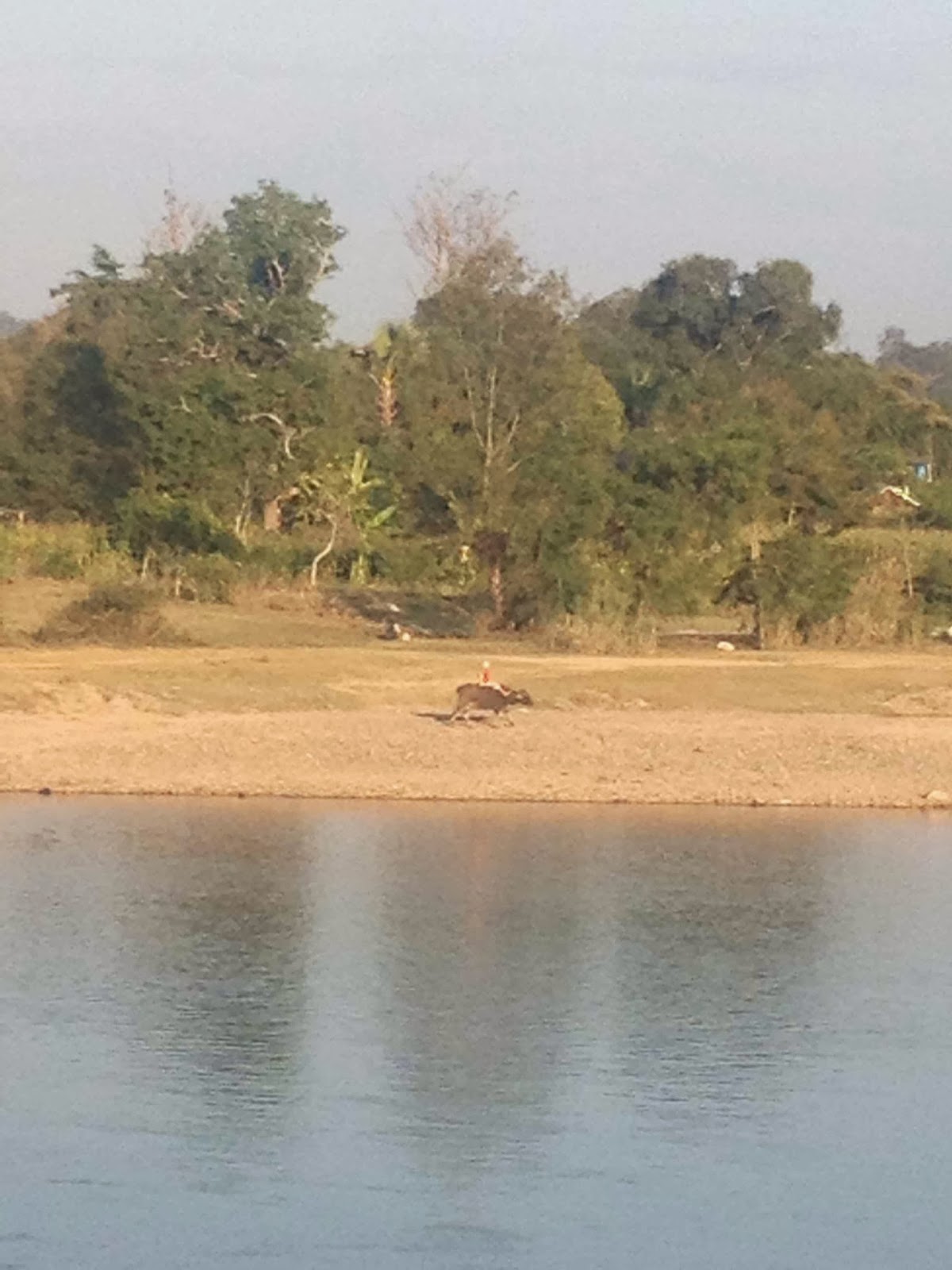 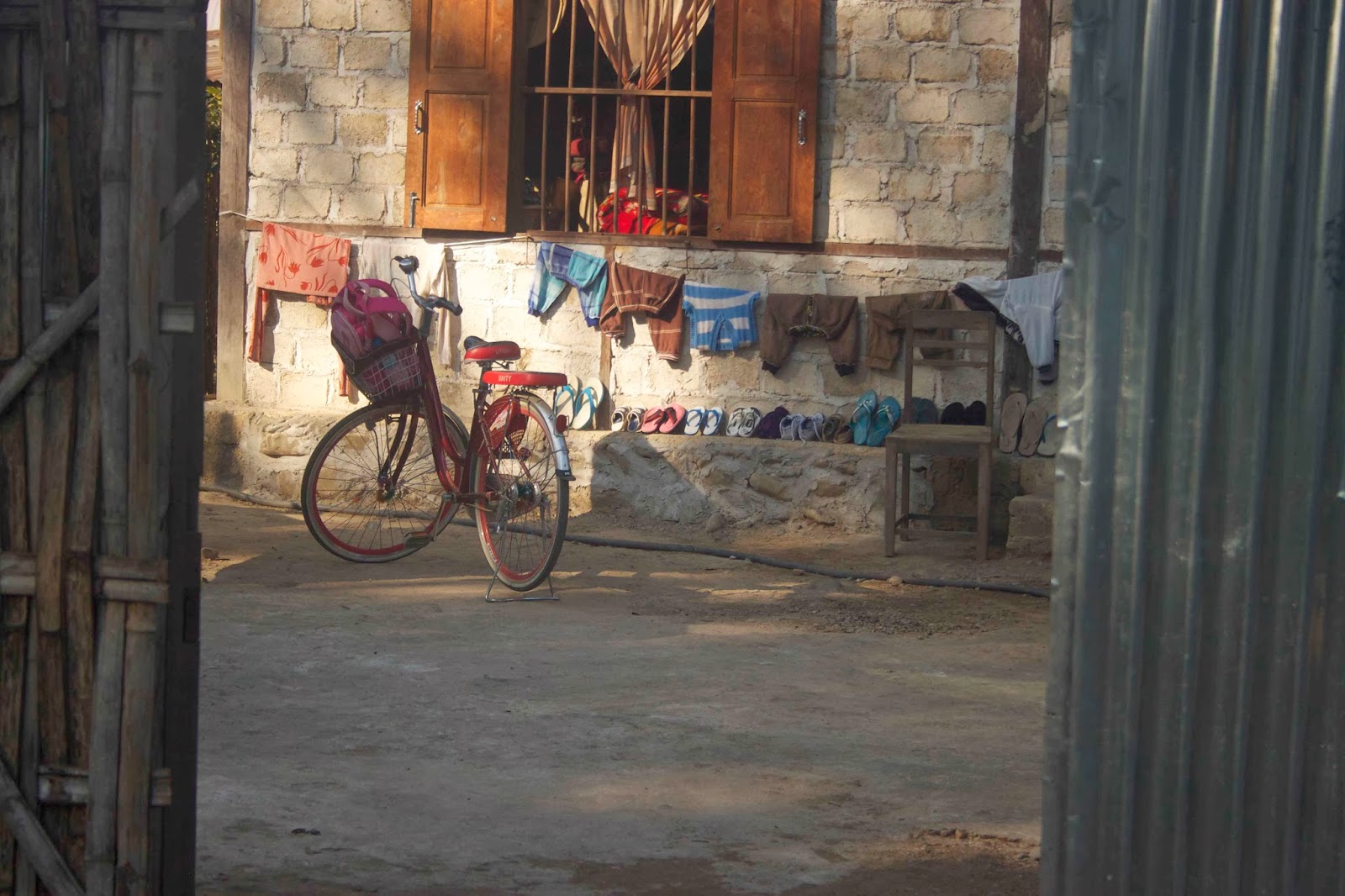 Our cobbler-friend all made from used tyres 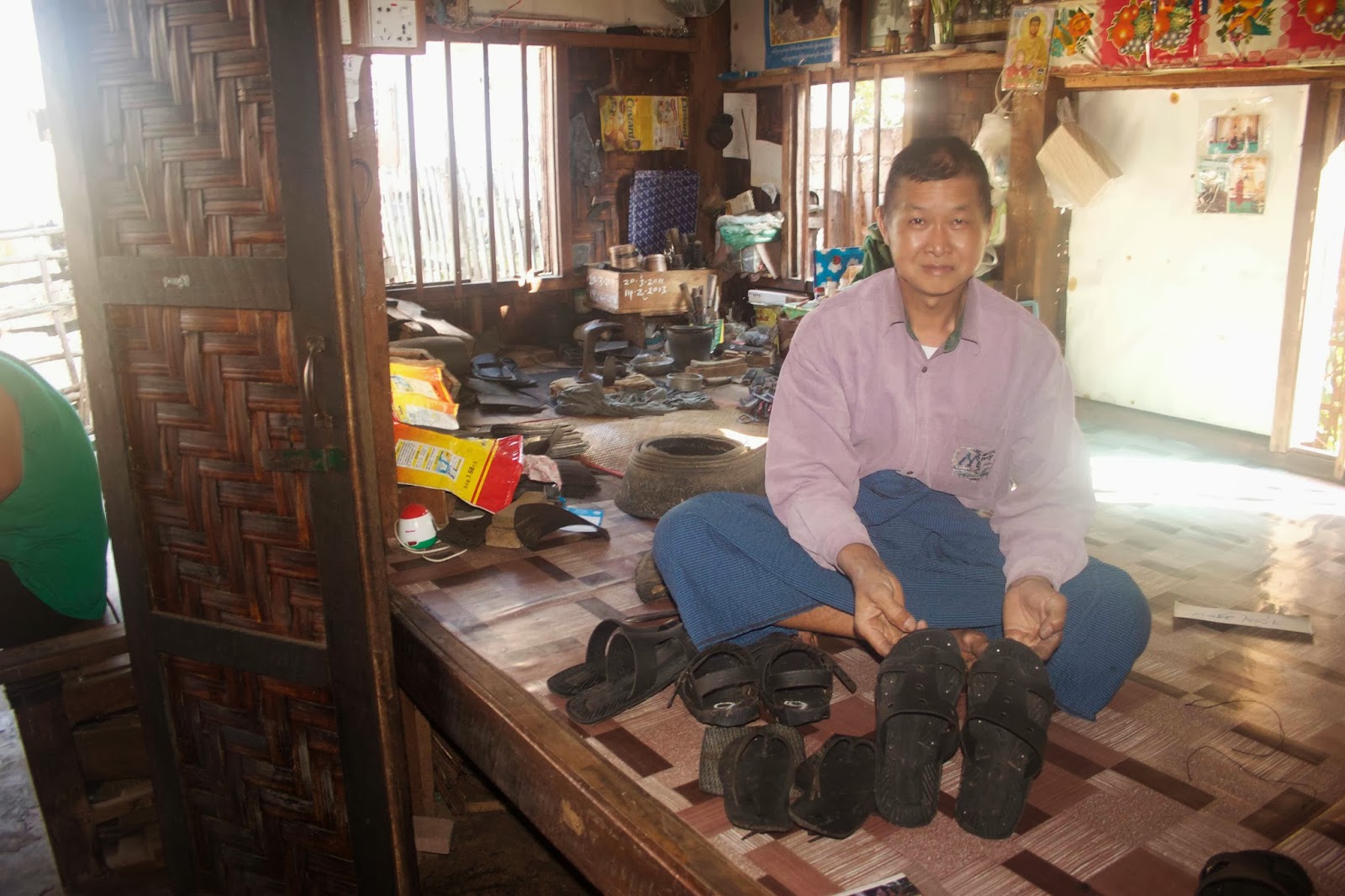 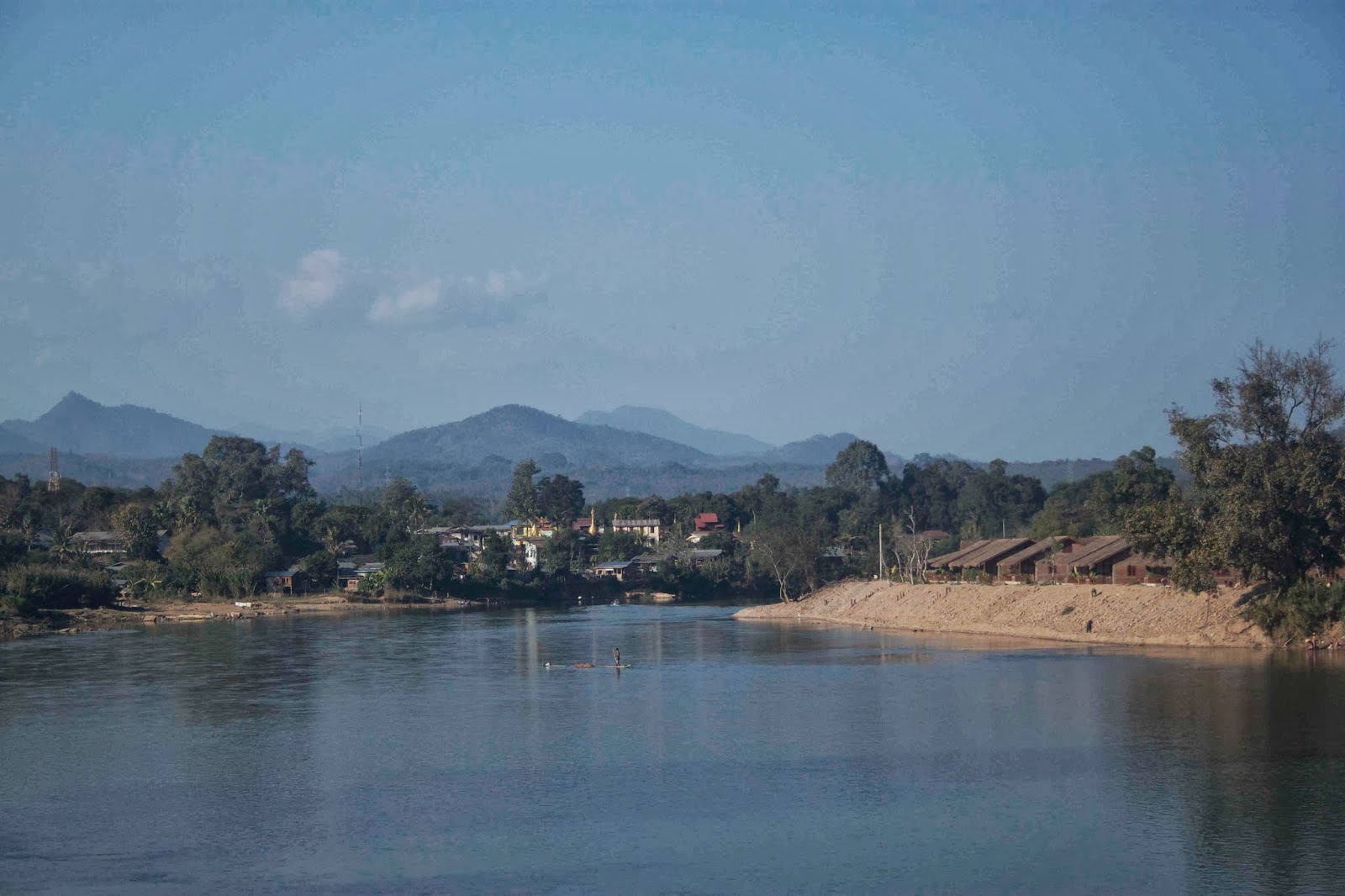 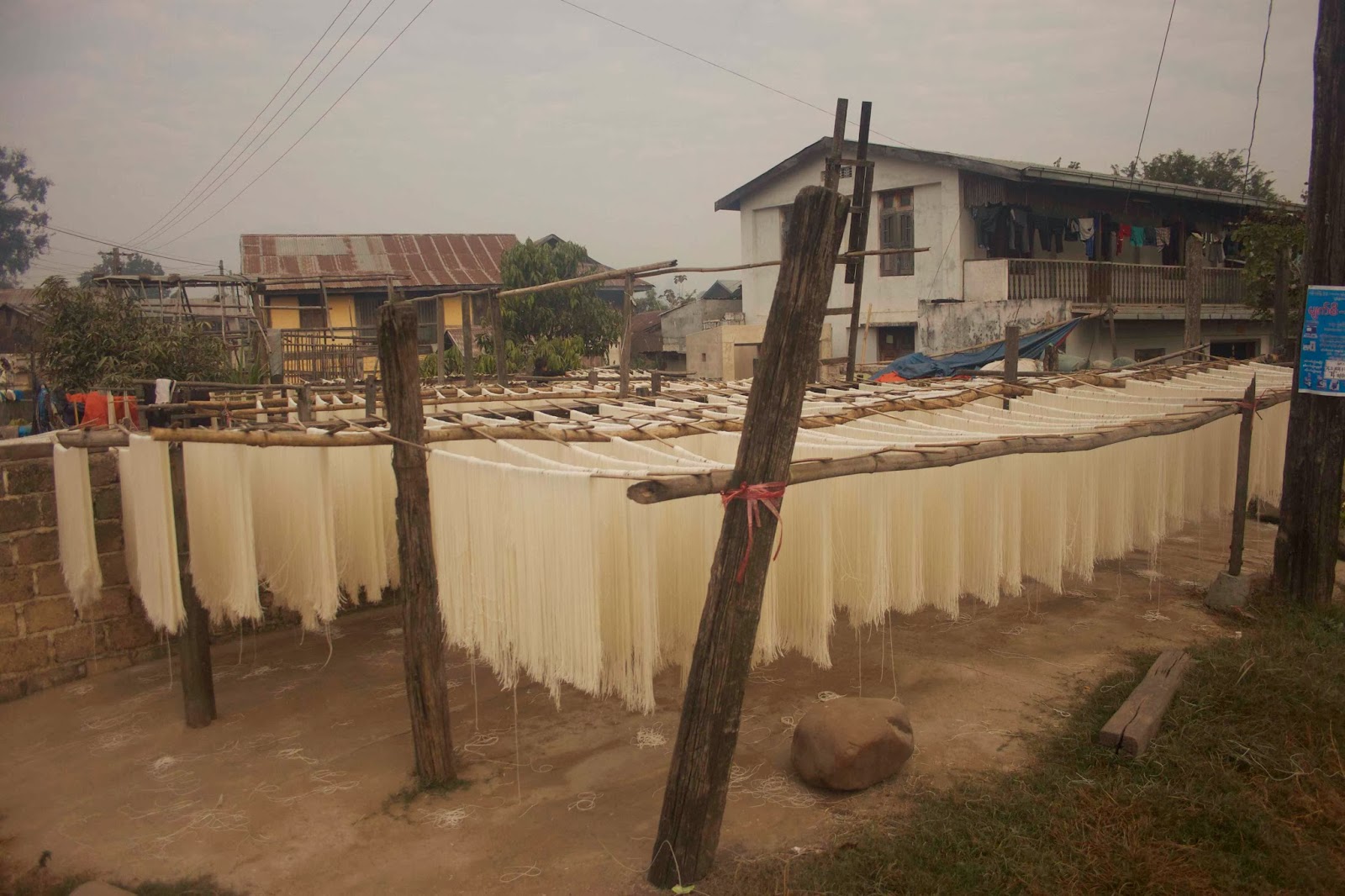 The noodle factory in action 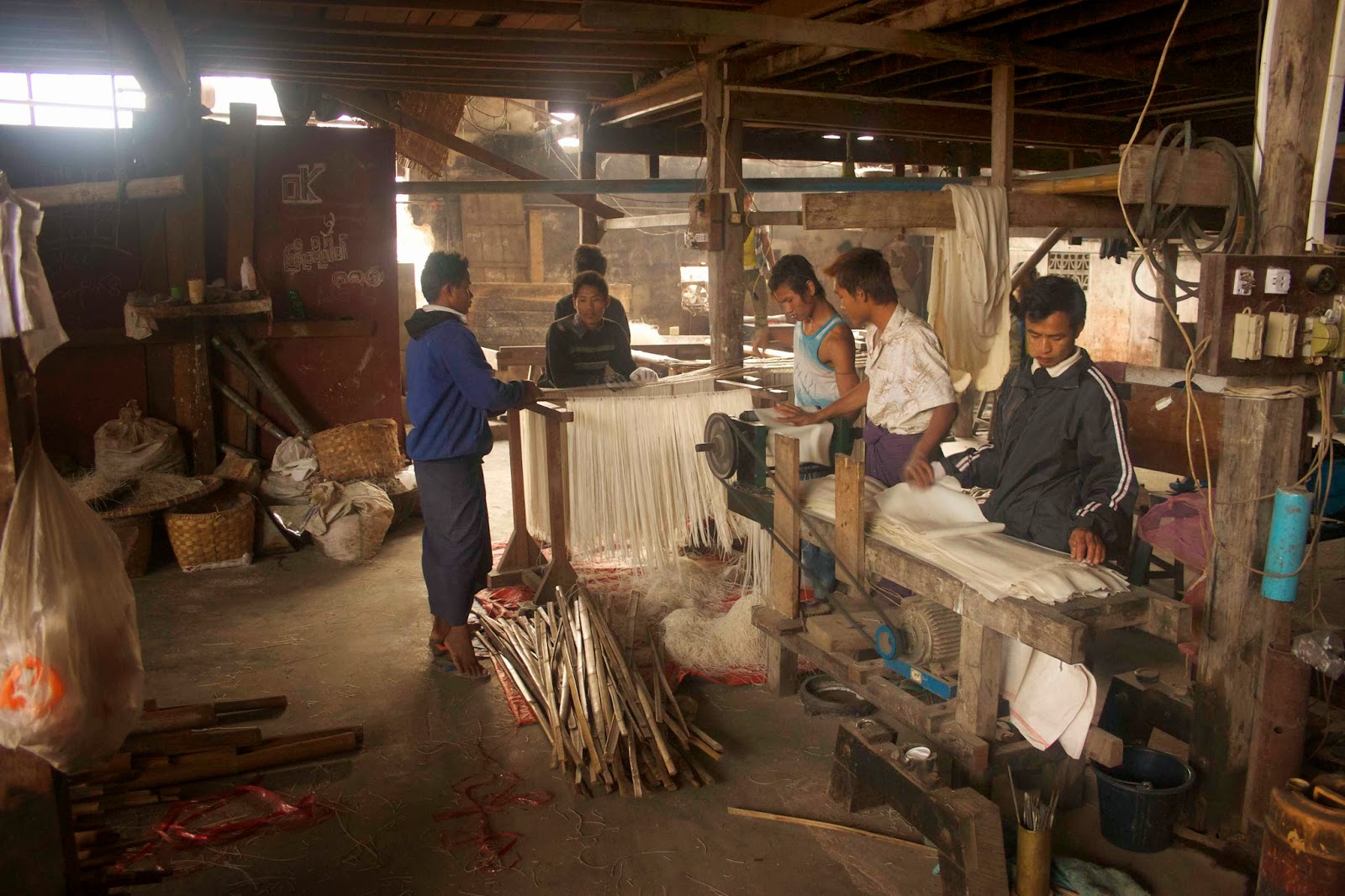 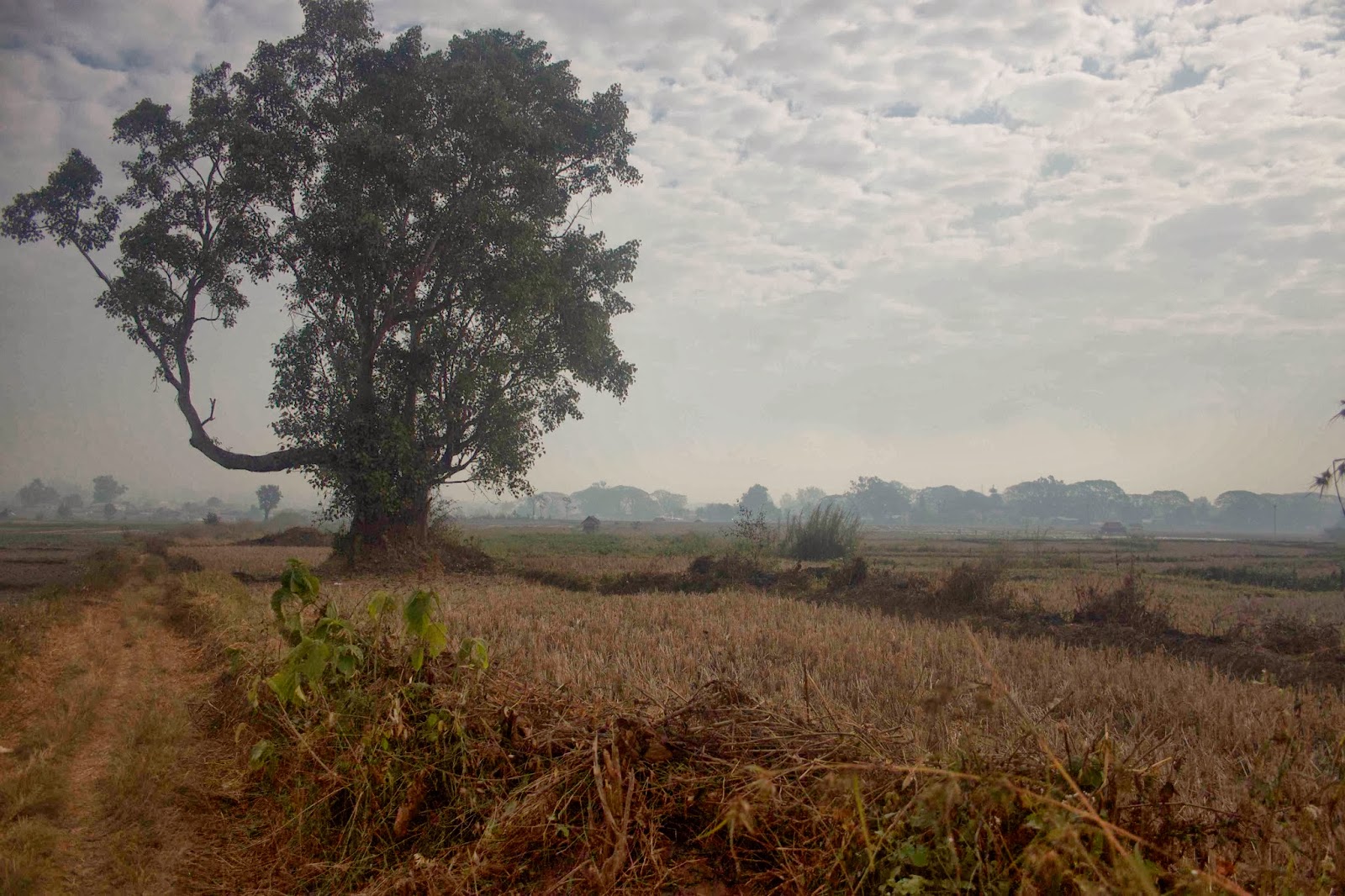 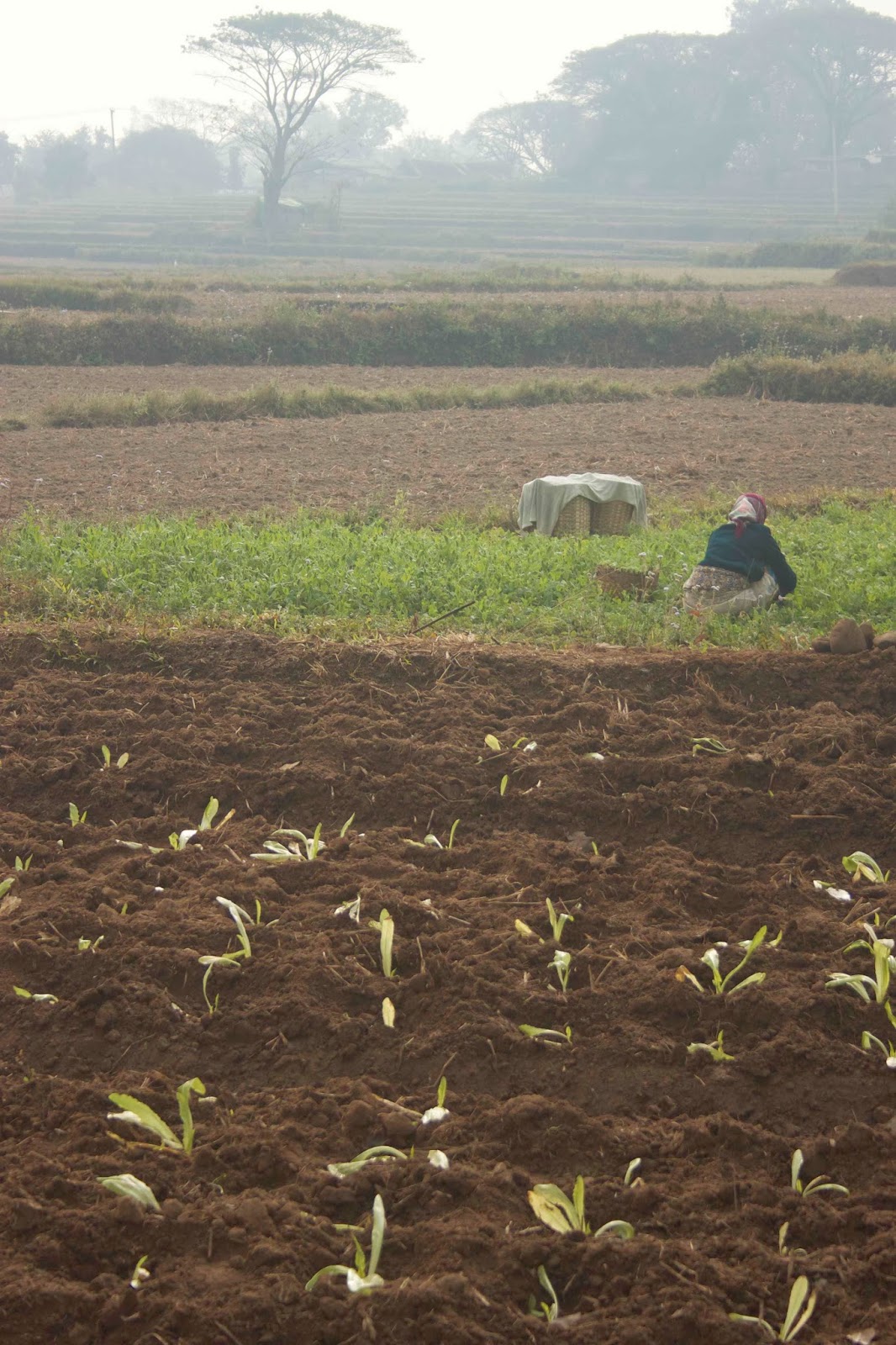 Ox plough in the fields beyond the village 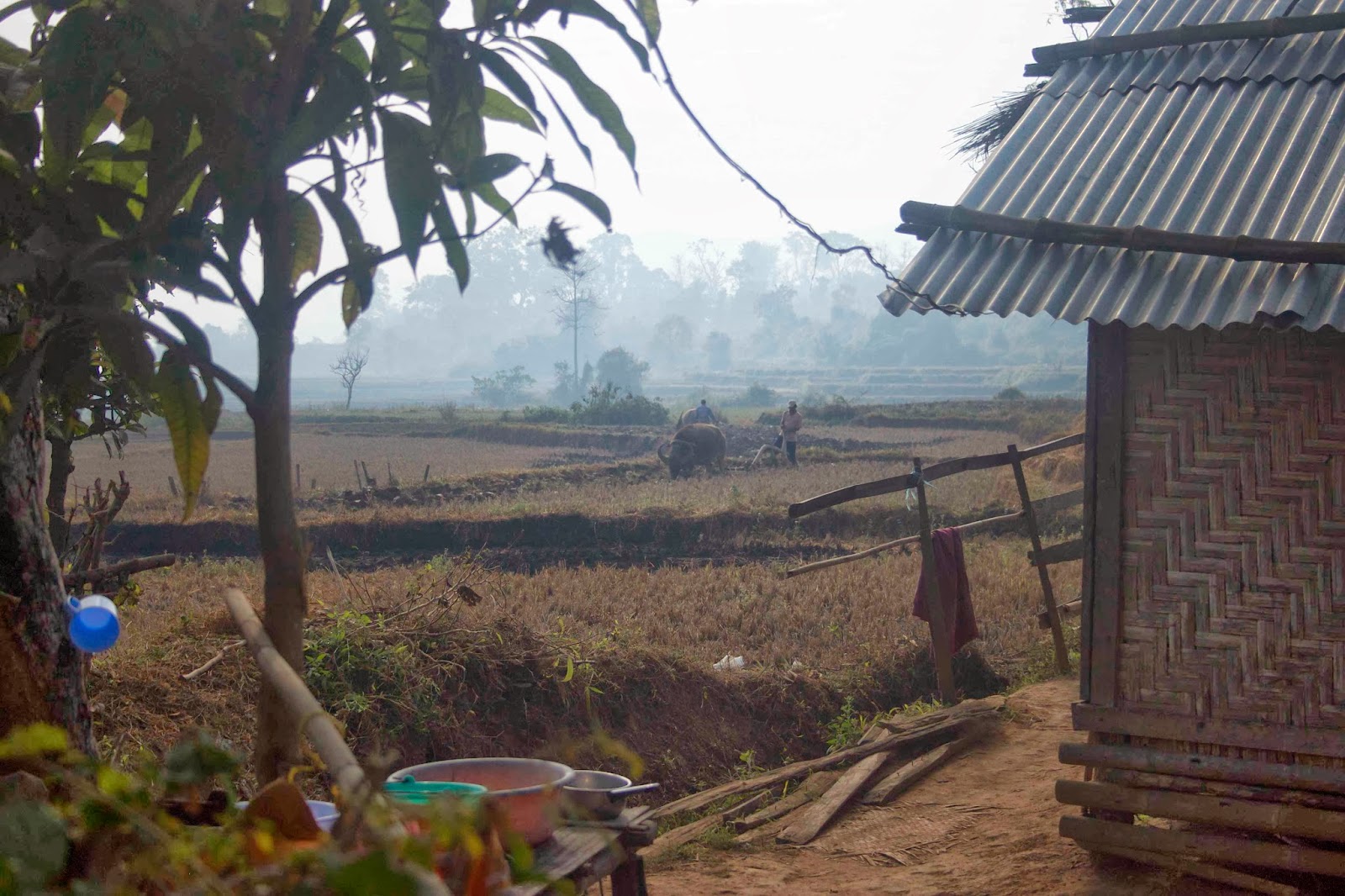 Women wash their clothes in the stream 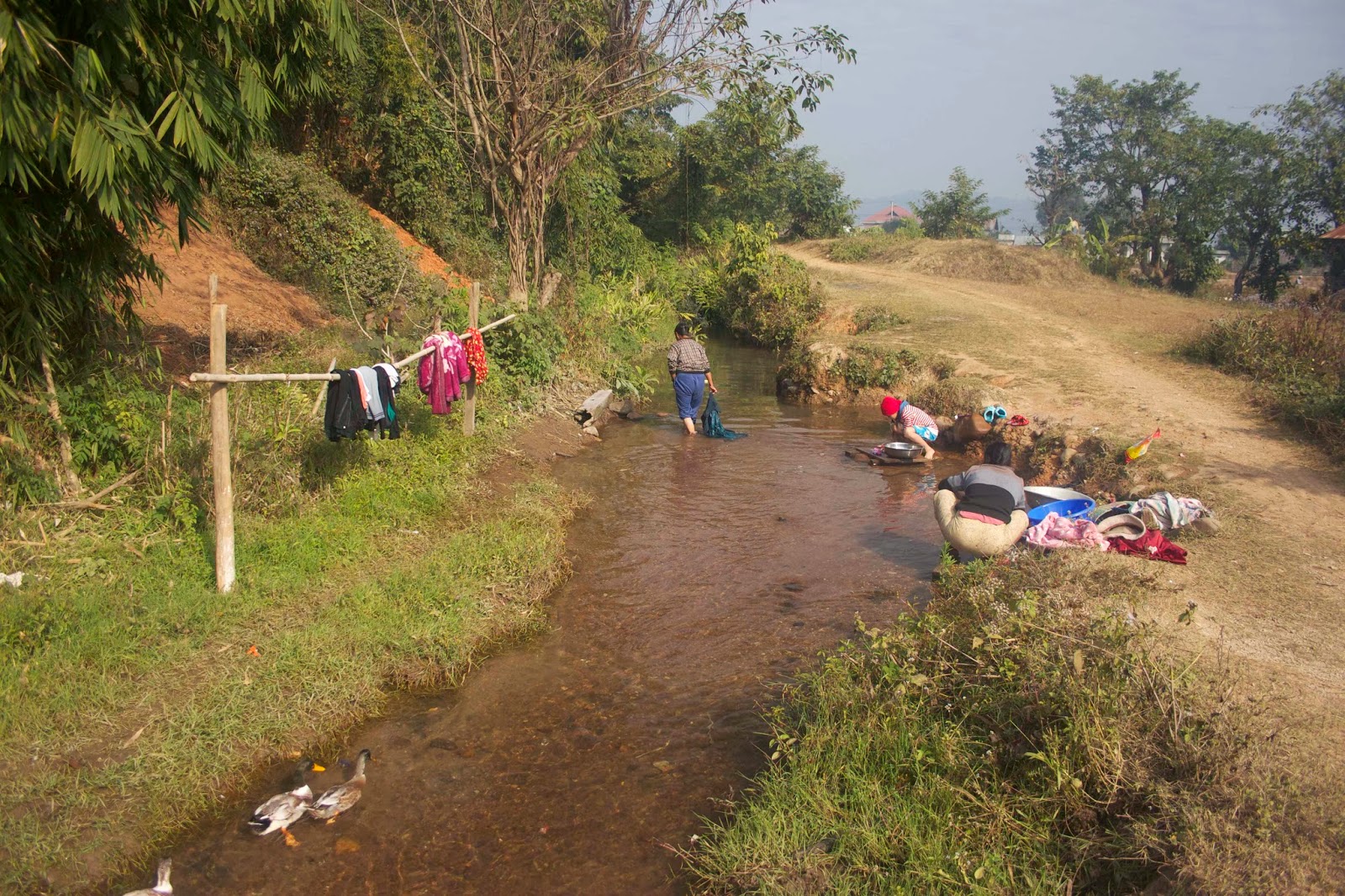 The buffalo are a very valuable asset in rural Myanmar, this calf will be well looked after 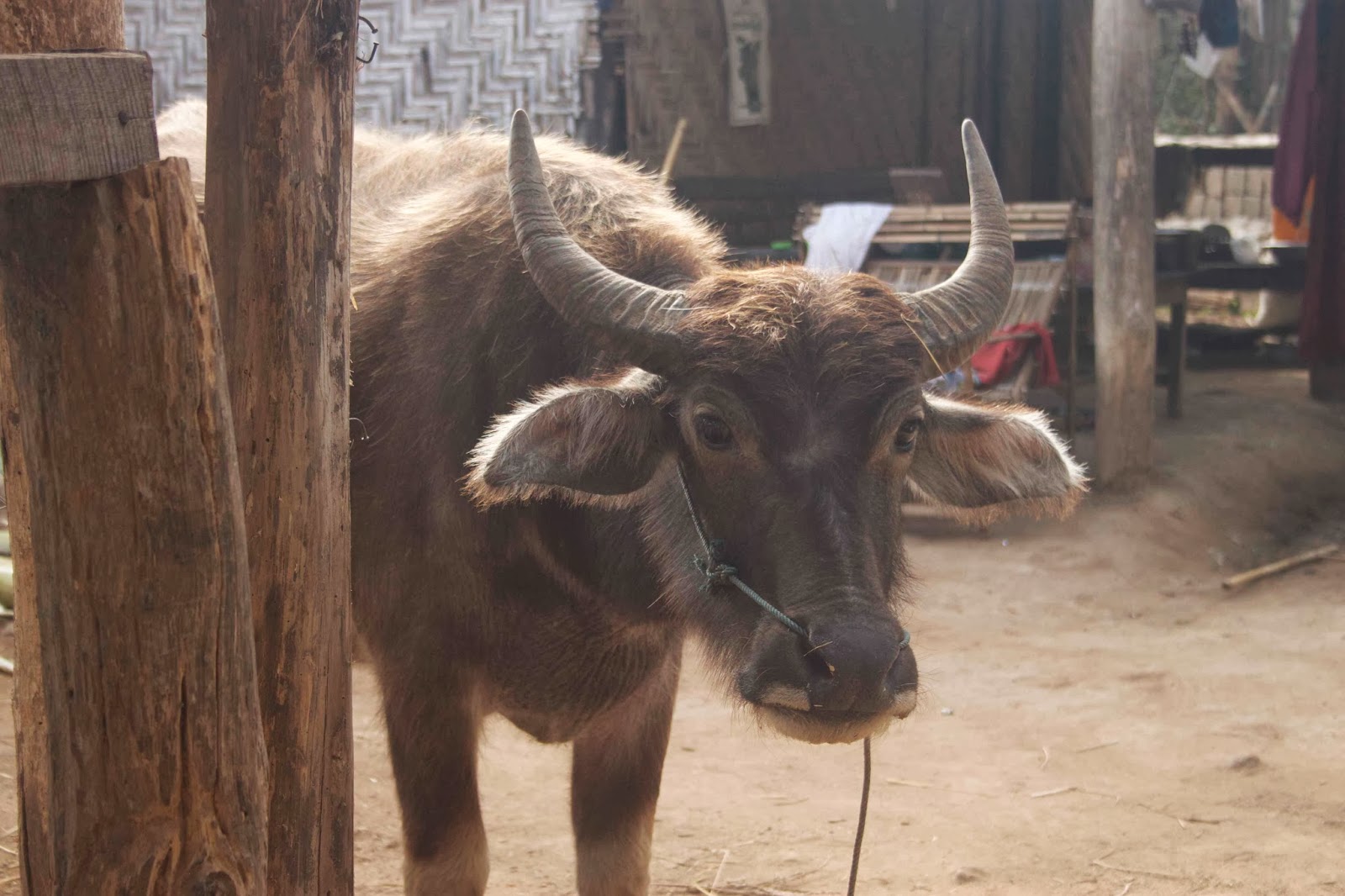 A monk descends from the temple after morning prayers 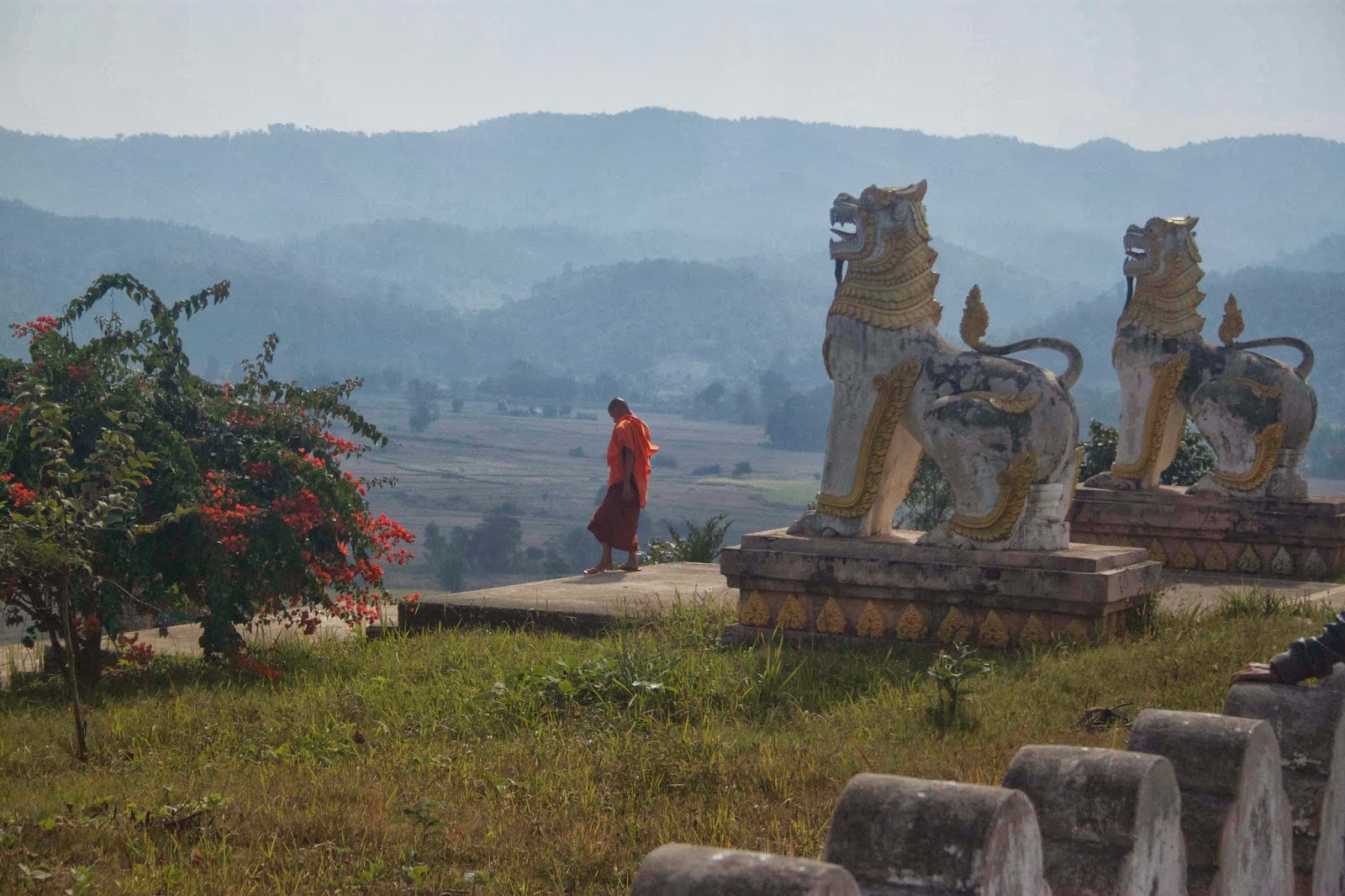 Ausang or guide was a wealth of knowledge, he'd taught himself English when he was a monk for 10 years in Mandalay 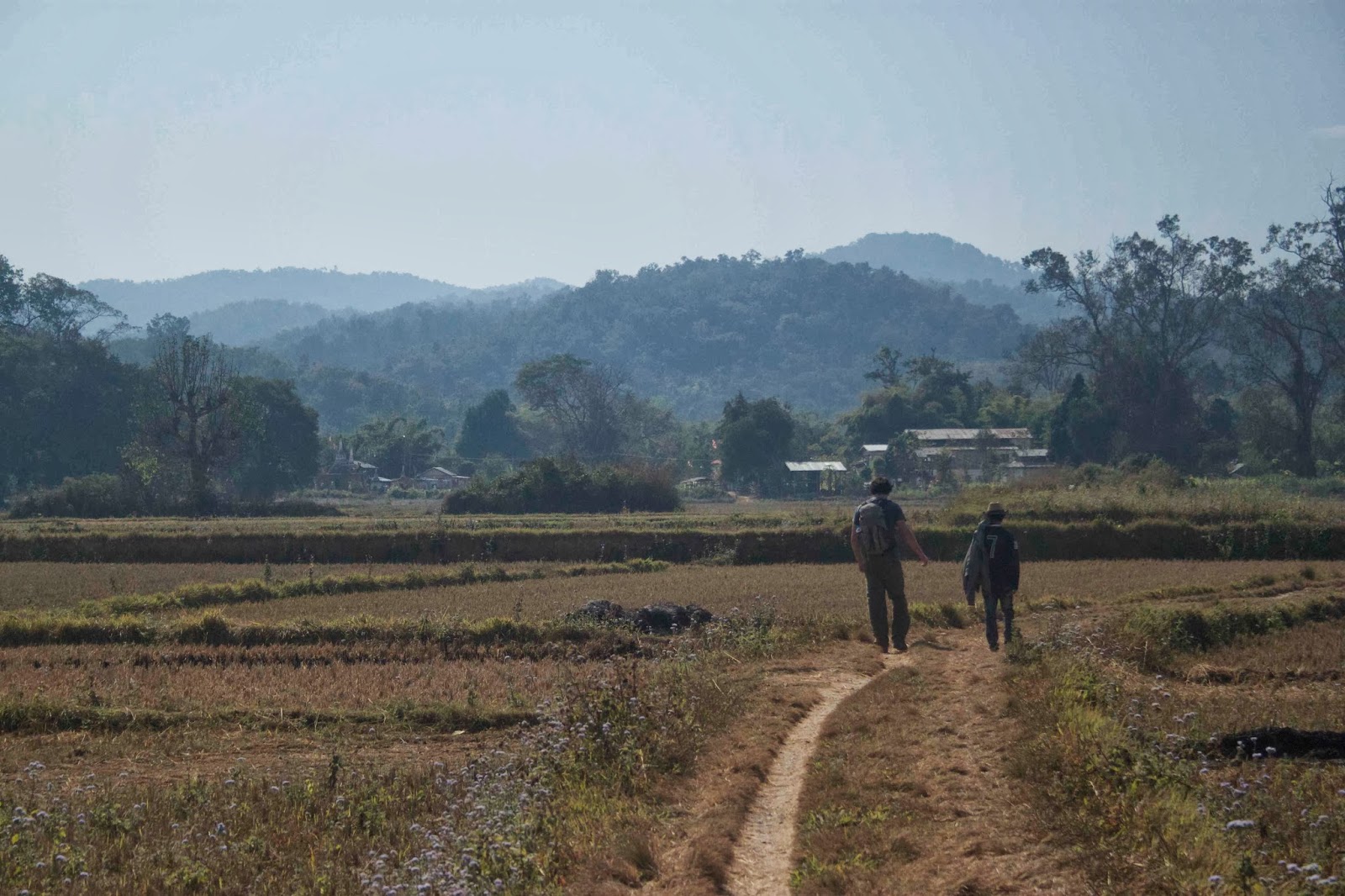 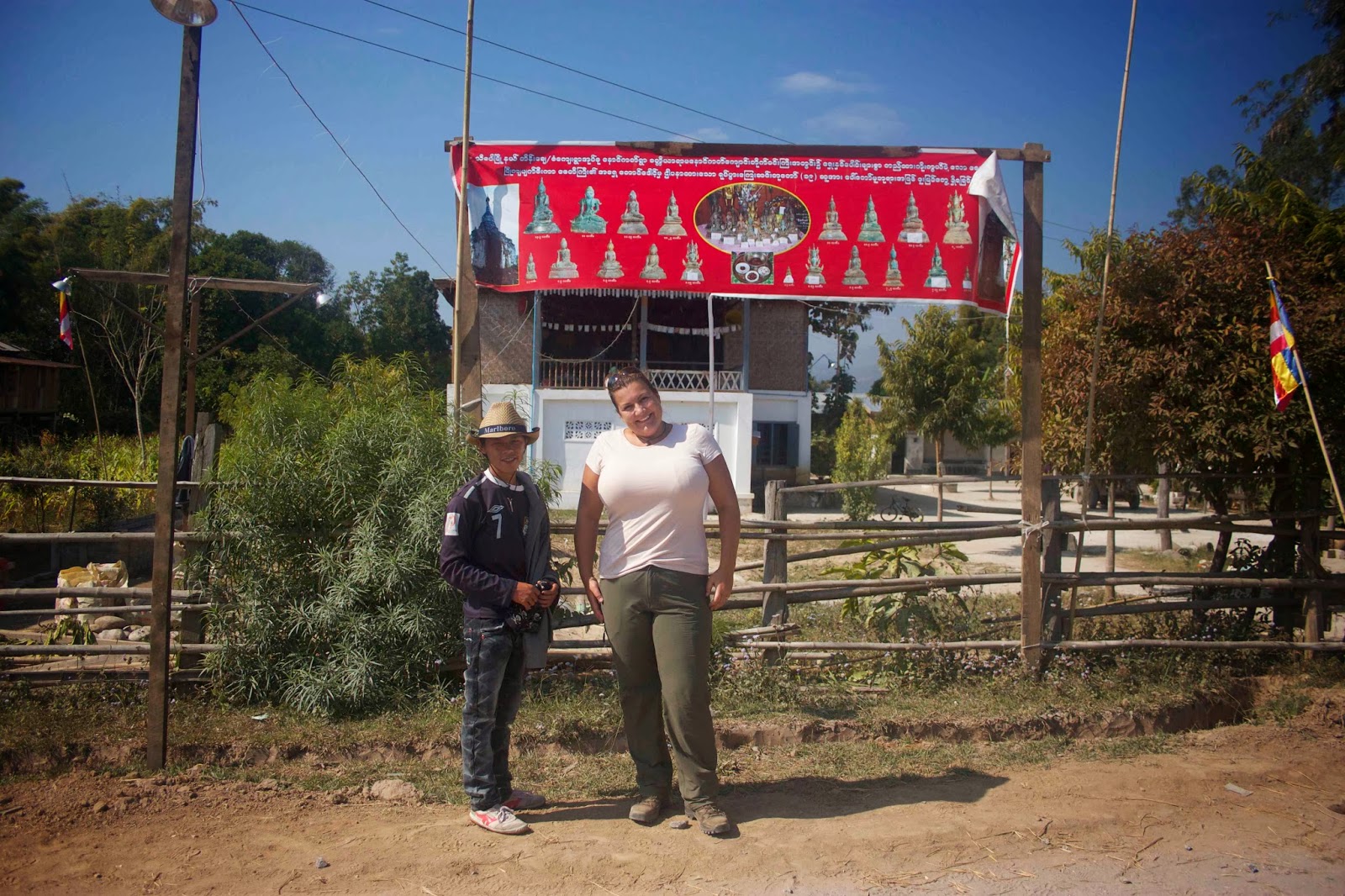 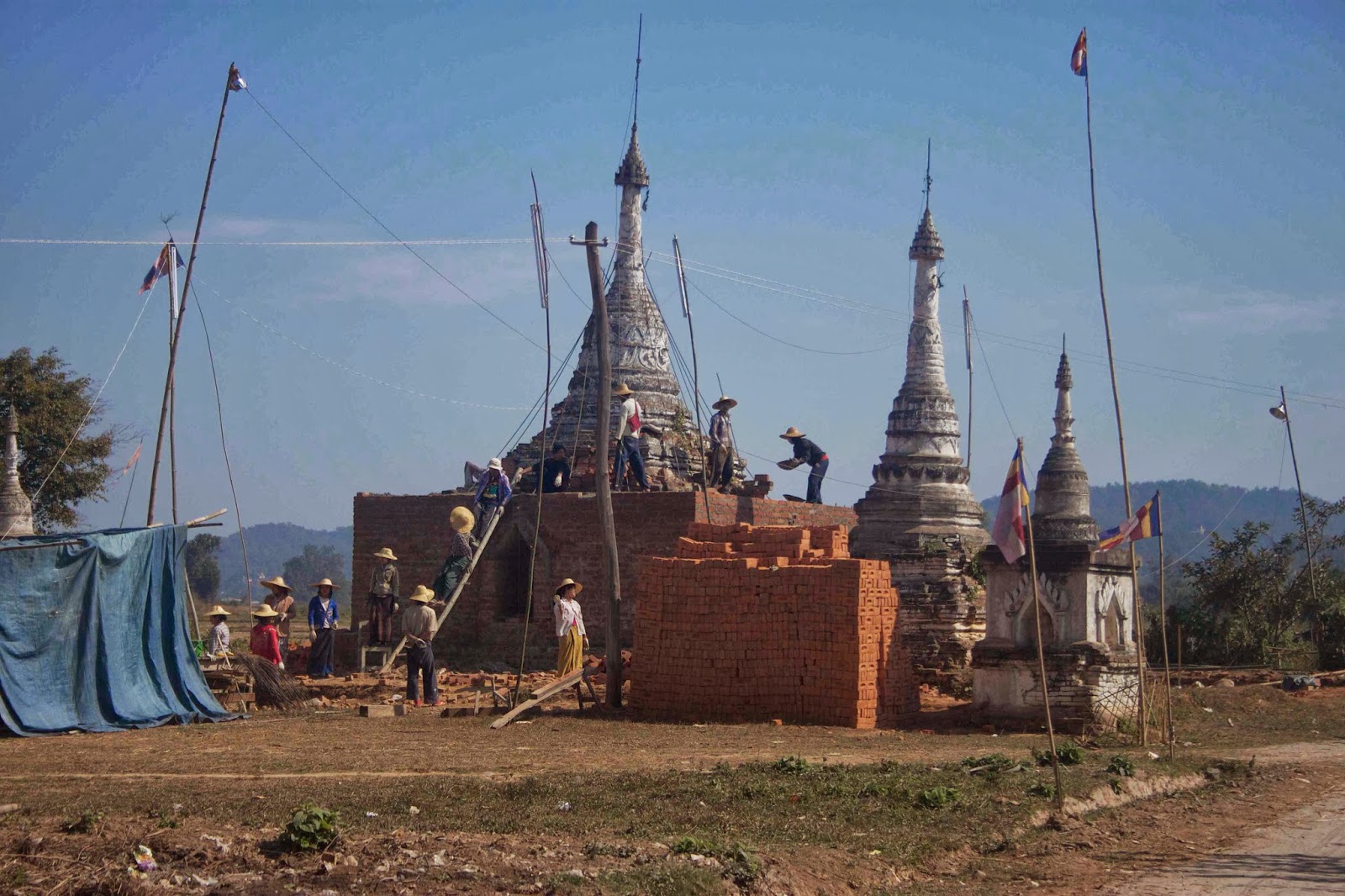 A villager leads her buffalos to water 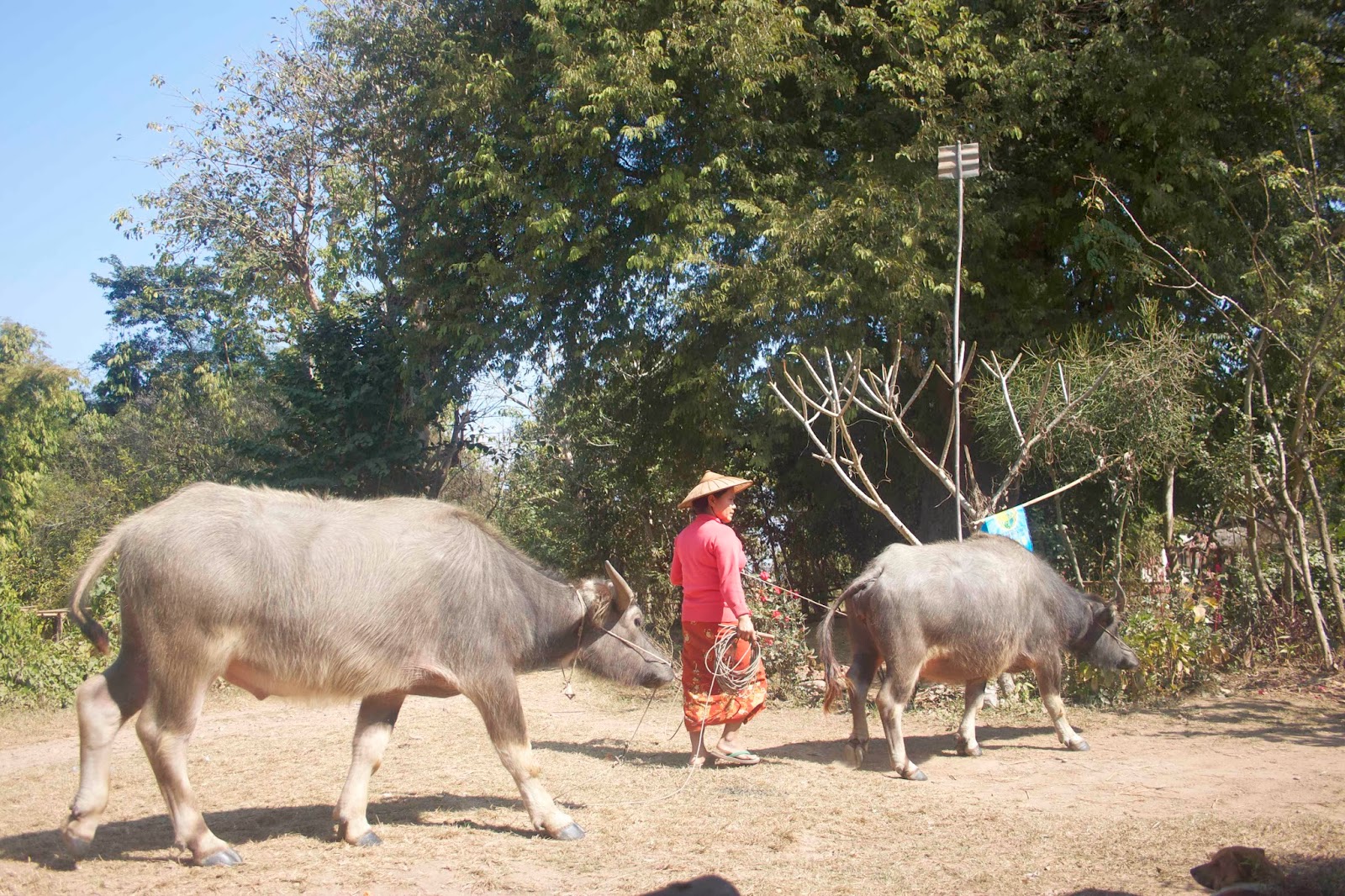 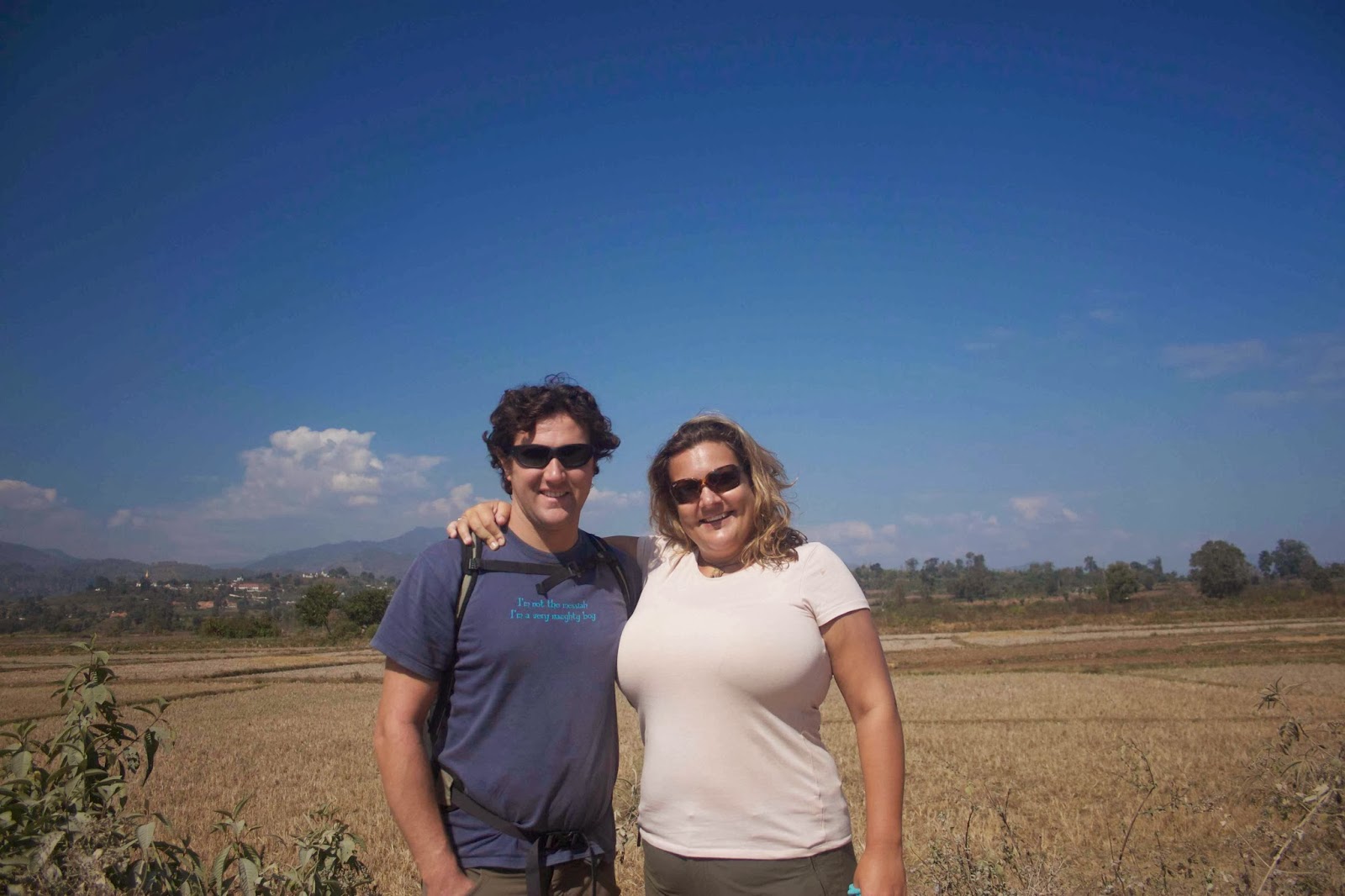 Sarah getting to know the locals 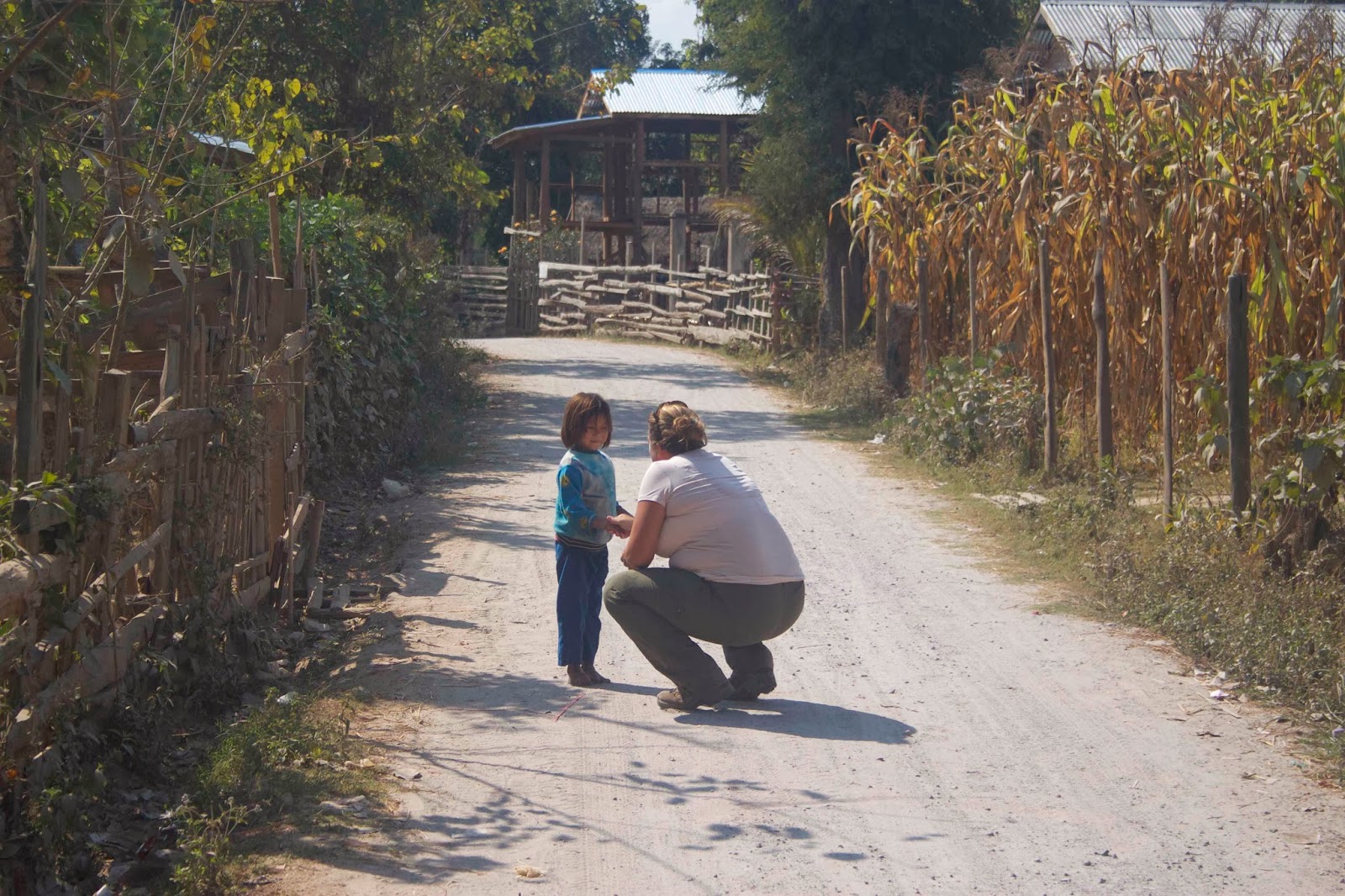 The local cigars being wrapped with expertise 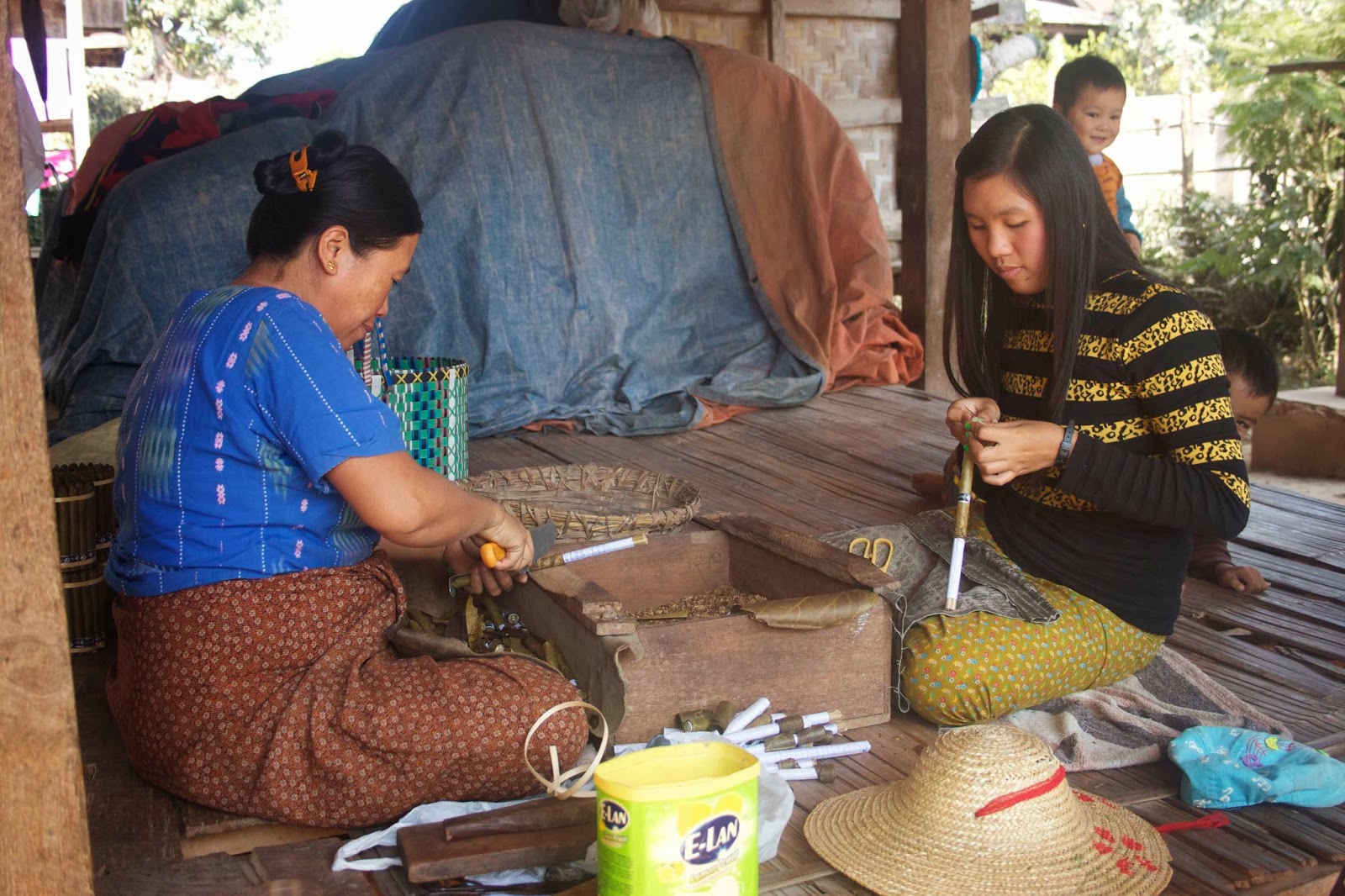