From our first day at Khao Sok we had wanted to experience some proper trekking, off the tourist trails heading deep into the jungle.  As luck would have it, our tattoo clad, bamboo canon friend was one of the best guides in the area. We let him sober up for a few days after new year and then arranged to go for a 2 day trek with him, Sah, and his friend, Joe.

We carried spare clothes, water, a hammock and blanket each and we let them carry the food! The first few kilometres of the trek took a path we’d followed before along a tributary of the Sok river heading north into the jungle.  After a few hours we reached a beautiful waterfall with a deep plunge pool full of carp with butterflies and dragonflies fluttering and whirring overhead. We couldn’t resist the pool, so while the boys made a fire and cooked noodles for lunch we dived into the cool waters to refresh and relax. This place looked and felt like a jungle paradise.

From here we switched from boots to sandals and followed the river upstream to a confluence, there we took the left branch and waded further north for another hour.  We reached our designated campsite around 3pm, collected wood for a fire, set up our hammocks and fished in the deep pools using small fresh water crabs for bait which we scooped out from under the rocks. We caught 3 beautiful carp for dinner and cooked them over the fire on bamboo skewers, along with rice steamed in bamboo sections, stir fried vegetables and red curry all served on bamboo plates. Then coffee, instant unfortunately but you can’t have everything, presented in bamboo mugs with a bamboo spoon – genius!!

After dark we donned headtorches and went out on a night walk to spot animals and catch frogs for breakfast!! The trick was to see the light reflecting in their eyes, then keep the torch straight at them to blind them, approach and grab them quickly in one hand.  The boys were expert at this approach catching 7 or 8 in about an hour. The frogs were large, similar in size to a bull frog and once caught were popped into a sack carried by Sah. The other dish on the menu was snapping turtle, extremely common in these waters but catching them can be hazardous to your health. The mouth is beak-shaped and their jaws strong enough to remove a finger with ease.  Their shell is soft and they spend most of their days buried in the sediments on the sides of the river and under the overhanging banks. We weren’t keen on this particular dish but the boys were insistent and within the hour had found and caught one of these crafty creatures and popped it into the same bag as the frogs, which caused some alarm to the already fearful frogs and it took some time for the bag to settle down!

Unfortunately we didn’t see much life on the river, except what was in the bag, we saw lots of spiders including some enormous tarantulas and plenty of tracks including Tapir and Bison – these formidable creatures are similar in size to the huge water buffalo of the African plains.

We settled down into our hammocks wearing clean clothes and our trekking clothes drying next to the fire.  The night did get a little cold but the blankets were enough and despite frequent awakenings due to the different noises coming from the bush we slept well and were awoken to a dawn chorus from a number of gibbon troupes that surrounded us in the dim light.

A breakfast of toast and marmalade followed by frogs legs stew, most of which was eaten by the boys who despite their scrawny appearance each eat enough for 2 or 3 people! The turtle was spared, but only temporarily as it was being taken back as a present for Joe’s mother who apparently was an excellent cook!

Our 2nd day retraced our steps through the river back to the confluence and then turned east and ascended the steep jungle slopes to the top of the ridgeline around 500m above Khao Sok town.  This climb was exhausting, following a 3 month old trail which could only be traced by following the machete marks made by Sah all those weeks ago. It was incredible to watch them follow this jigsaw of notch marks trimmed sapplings and shortened vines, always making fresh cuts so they can find their way again.  The jungle cover is so thick that you can barely see 20 metres in any direction, loose the trail and you're in trouble.

It took a good 3 hours to reach the ridge, slowed by the steep loose terrain and thick bush that needs to be cleared by machete, the boys arms tiring in the heat. On our descent from the ridge we’d run out of drinking water so we drank directly from the large bamboo stem sections which were prolific on the lower slopes and from the large vines that could be found everywhere.

We saw plenty of tracks, signs of more bison, porcupine, wild pigs, mouse deer, barking deer and elephants but unfortunately spotted little, partly due to the noise of cutting through the foliage, the poor visibility and our distance from any fresh water at the top of the mountain.

After another 5 hours we emerged from the jungle into a rubber plantation around 1 kilometre from the town. In the fading light Sah’s father drove out to meet us on his scooter with some much needed fresh cool drinking water and a cheery smile. With aching limbs, scratches, bites and leech marks we both walked into our shower fully clothed and revelled in the hot water!

Our waterfall wash, lunchtime on Day 1 of our Trek 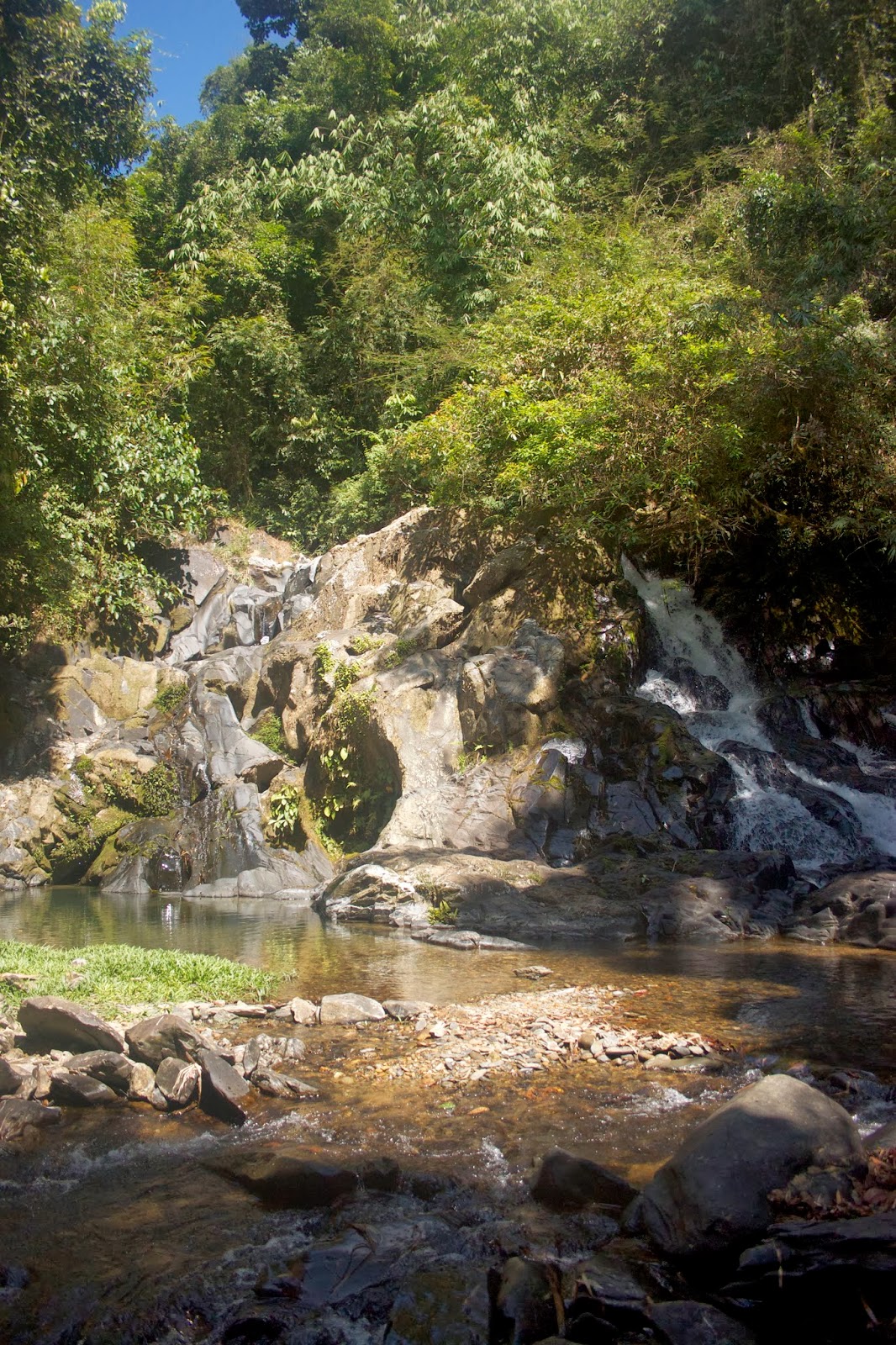 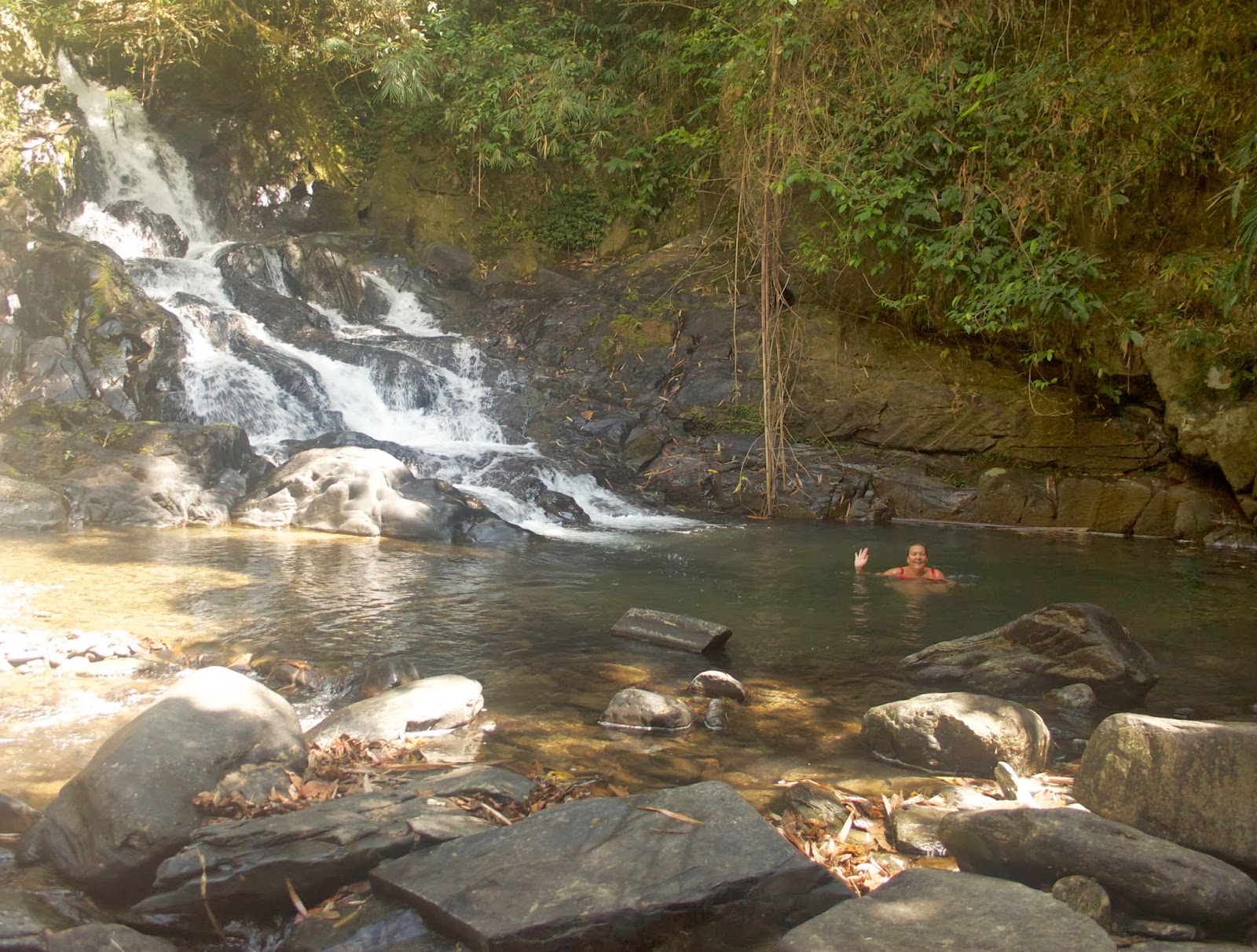 The butterflies and sweat bees, a harmless small jungle bee with no sting, enjoyed our salt encrusted clothes which we left drying in the sun 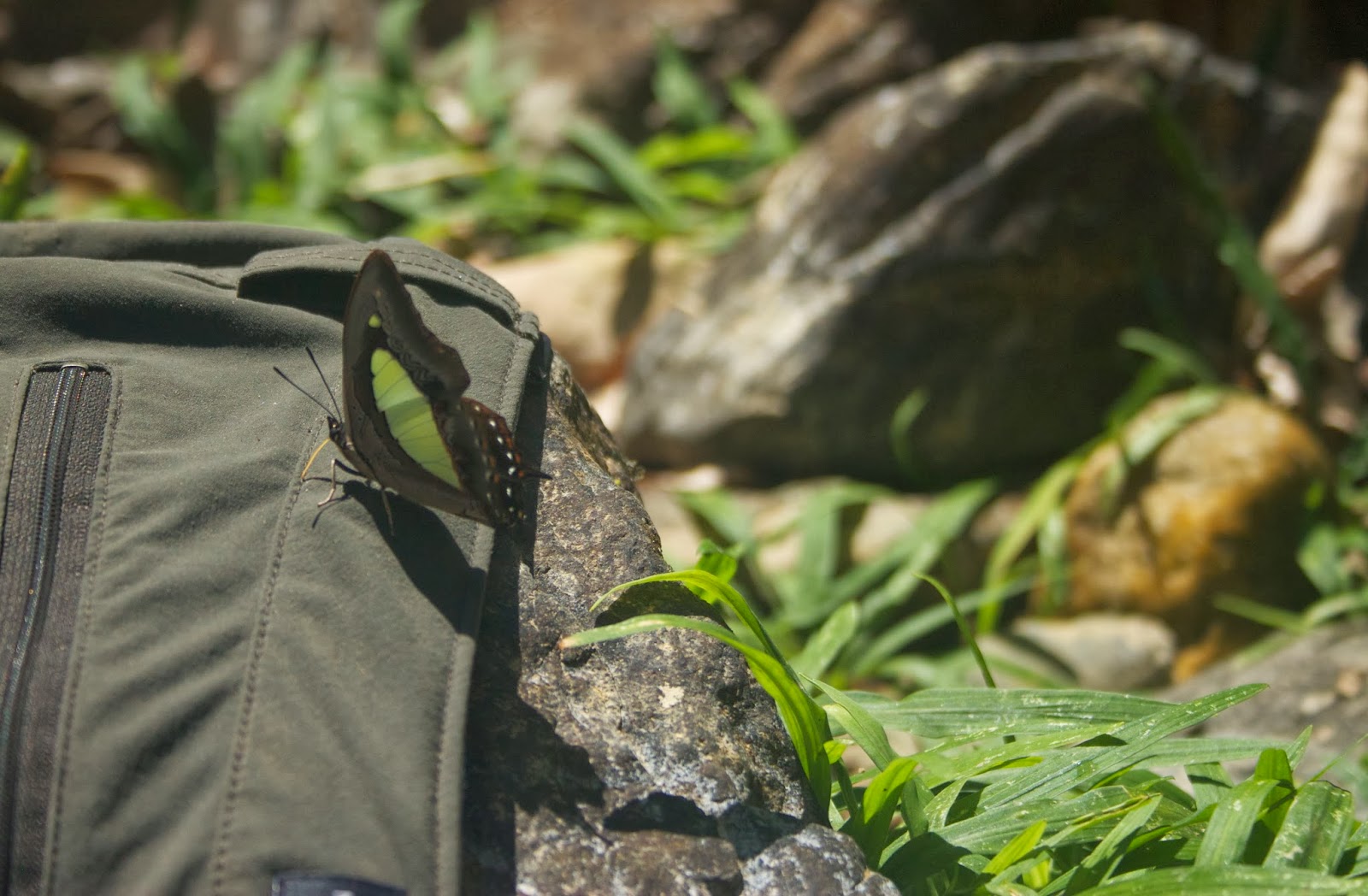 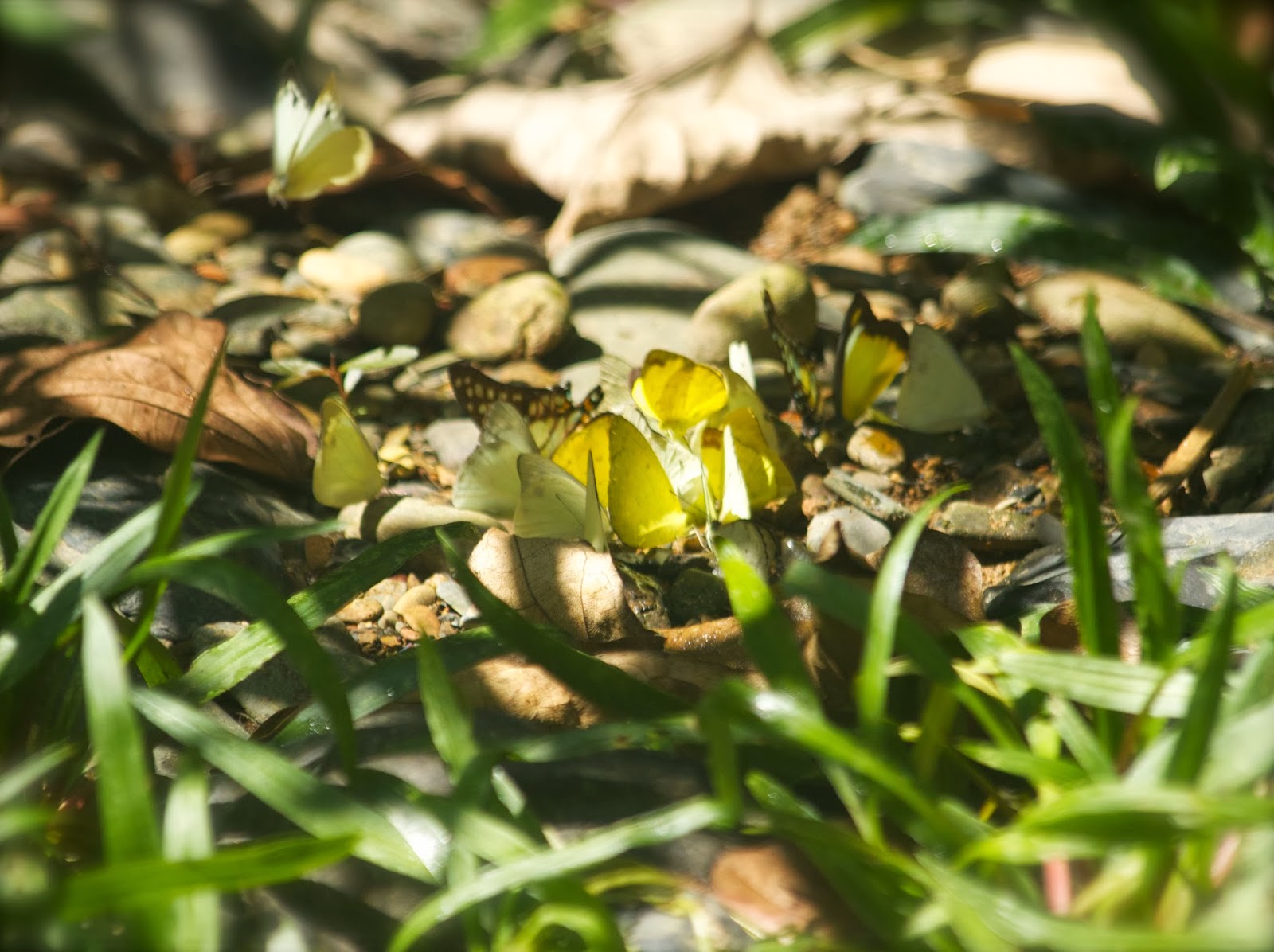 Noodles for lunch served in quick to make bamboo plates 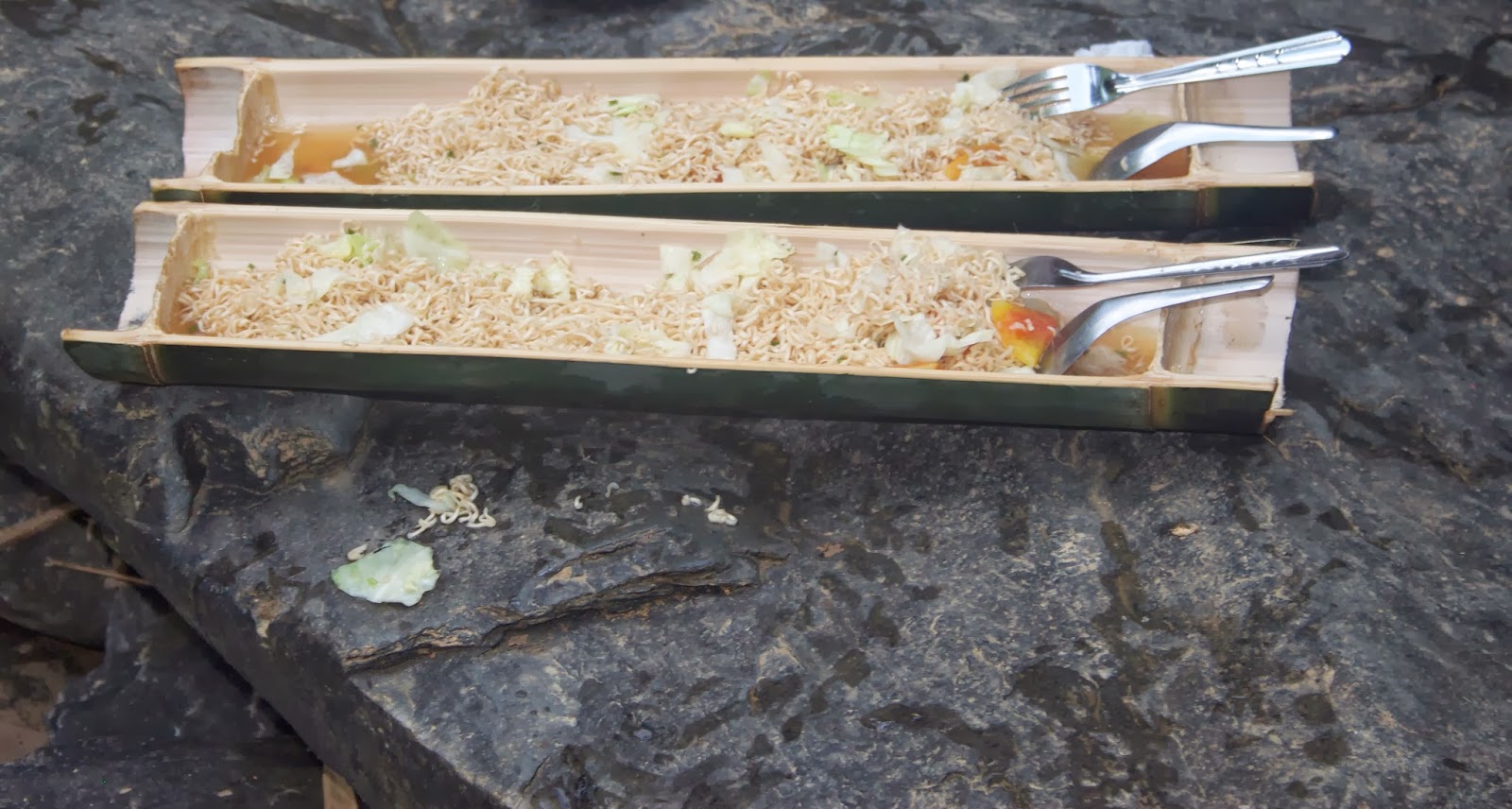 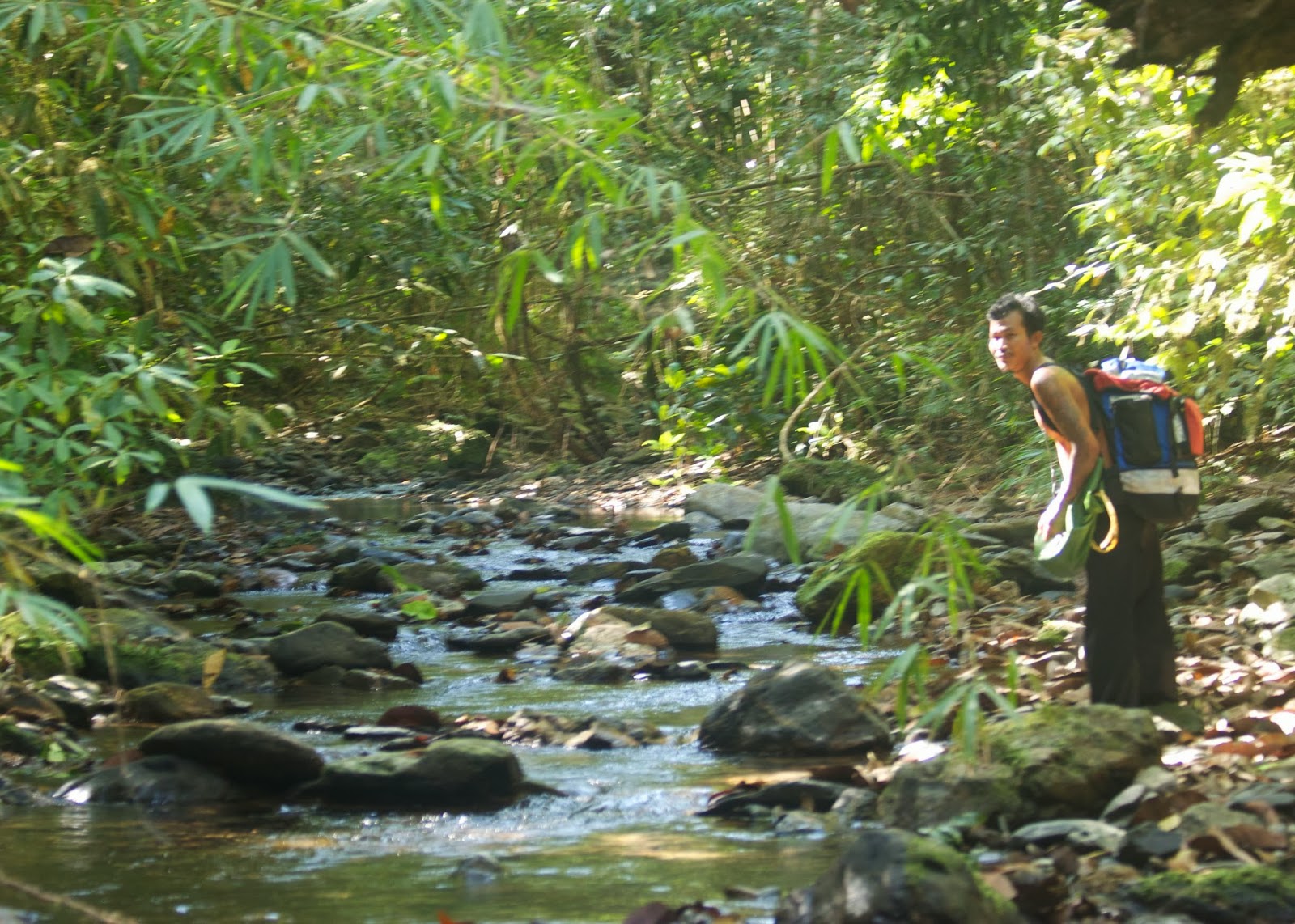 Joe with the first frog for the breakfast pot 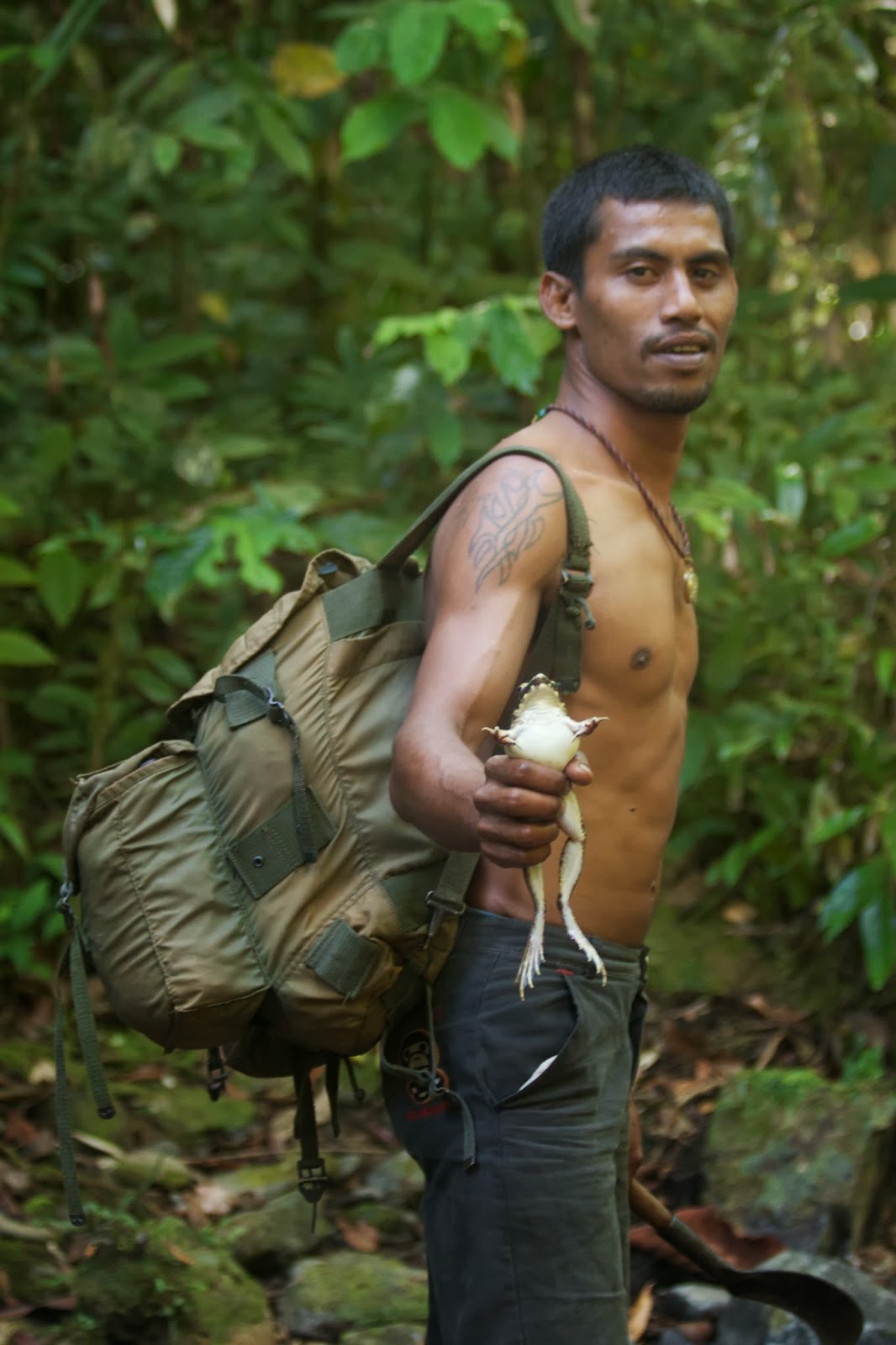 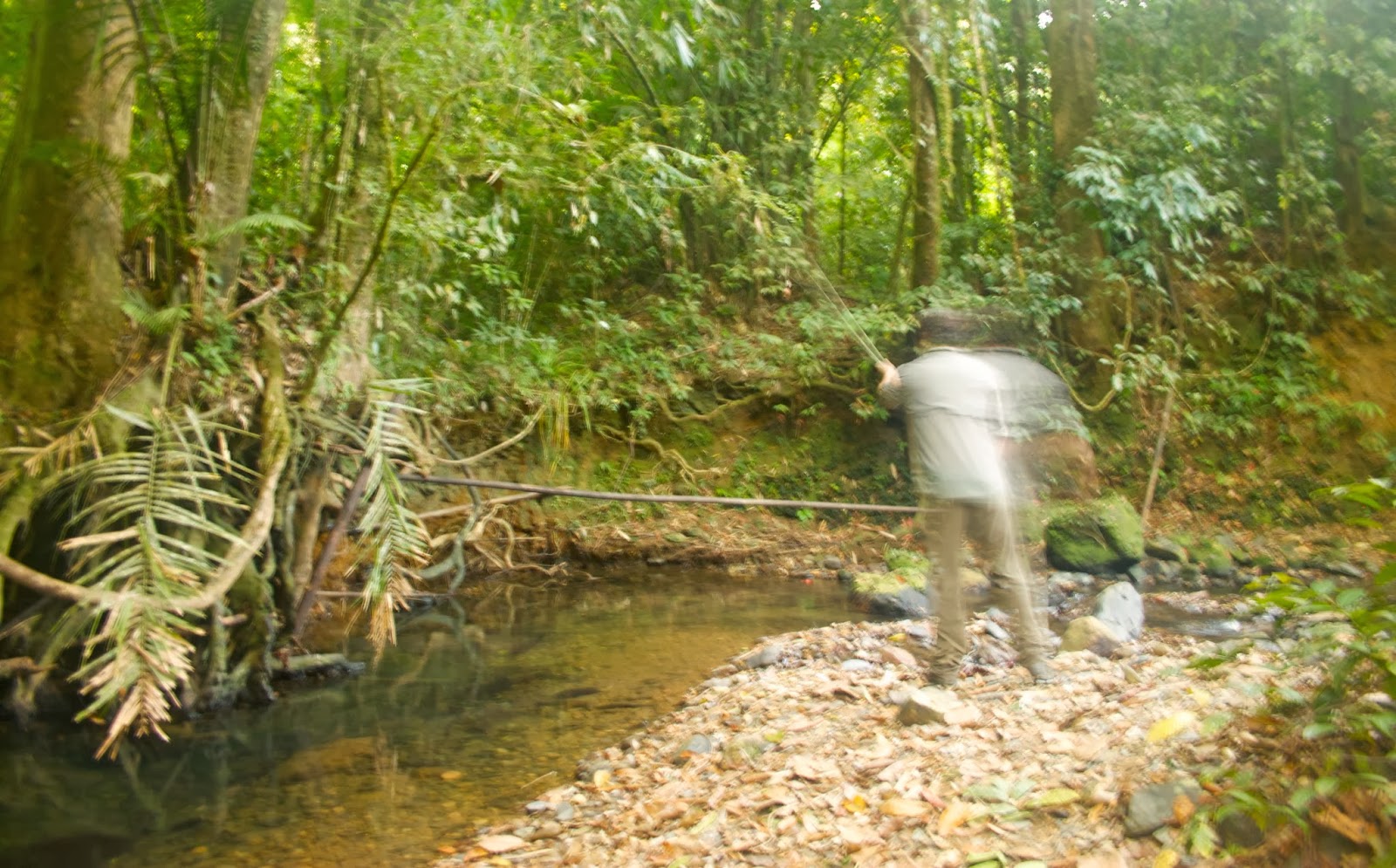 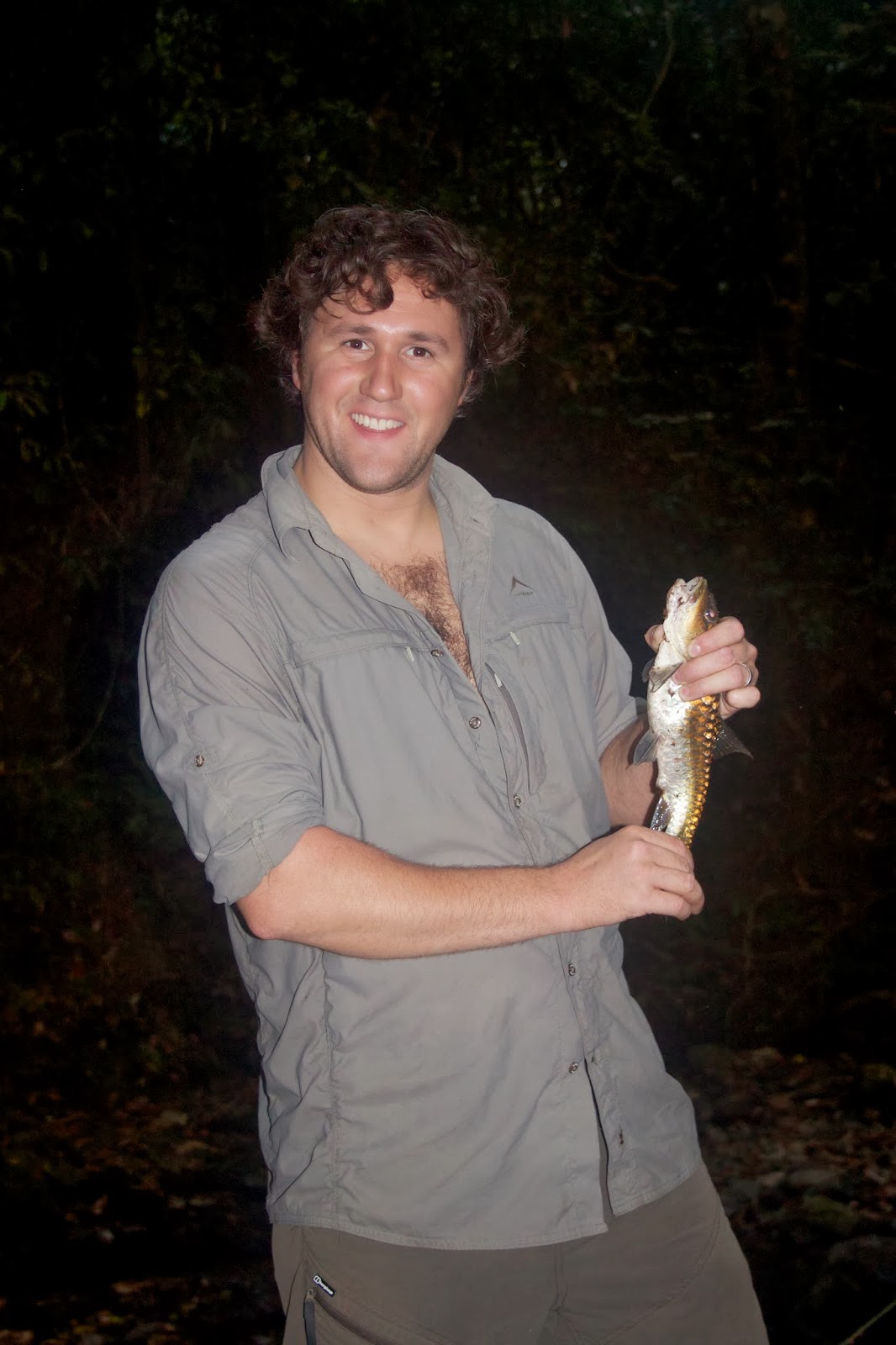 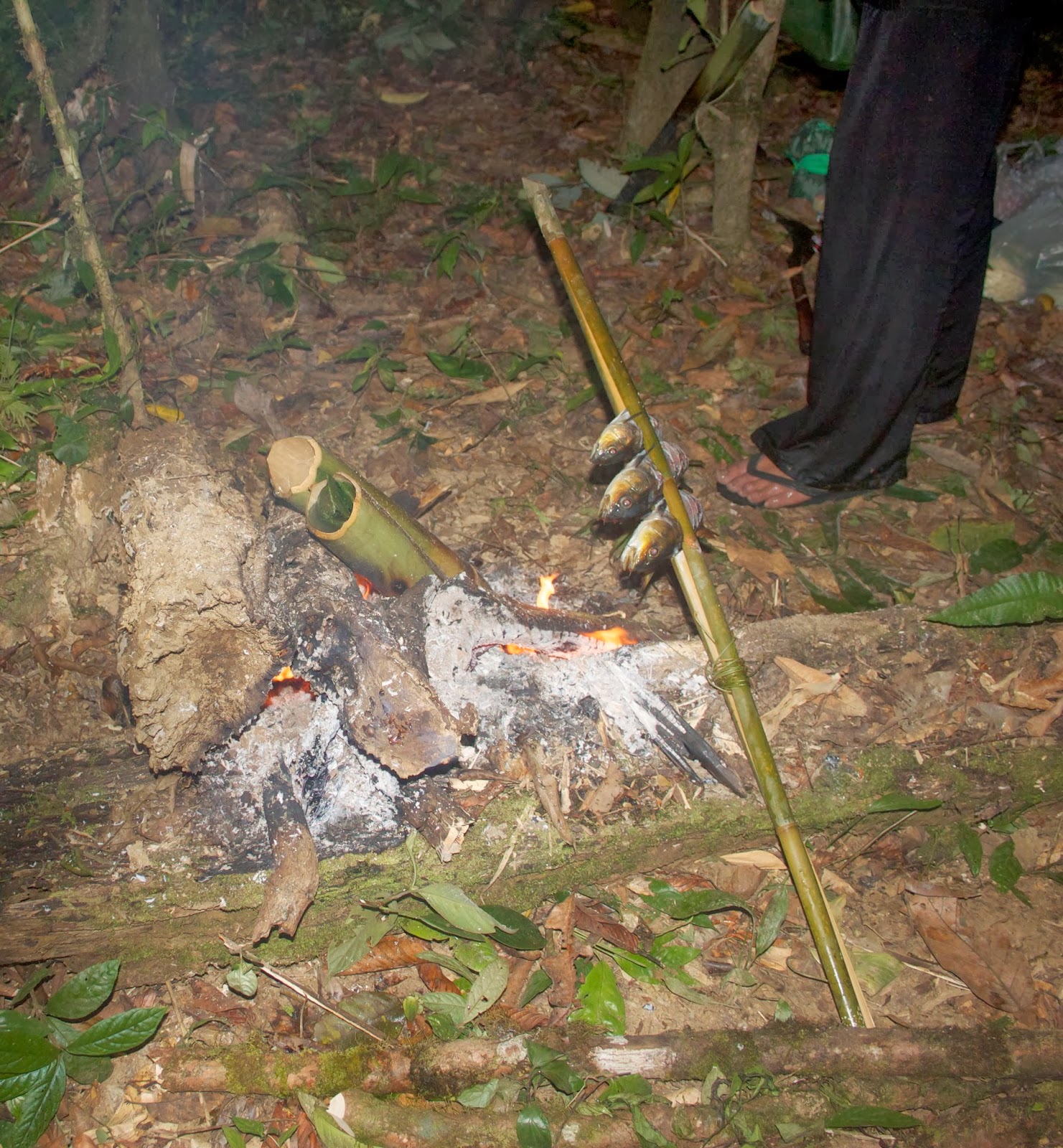 Campsite for the night 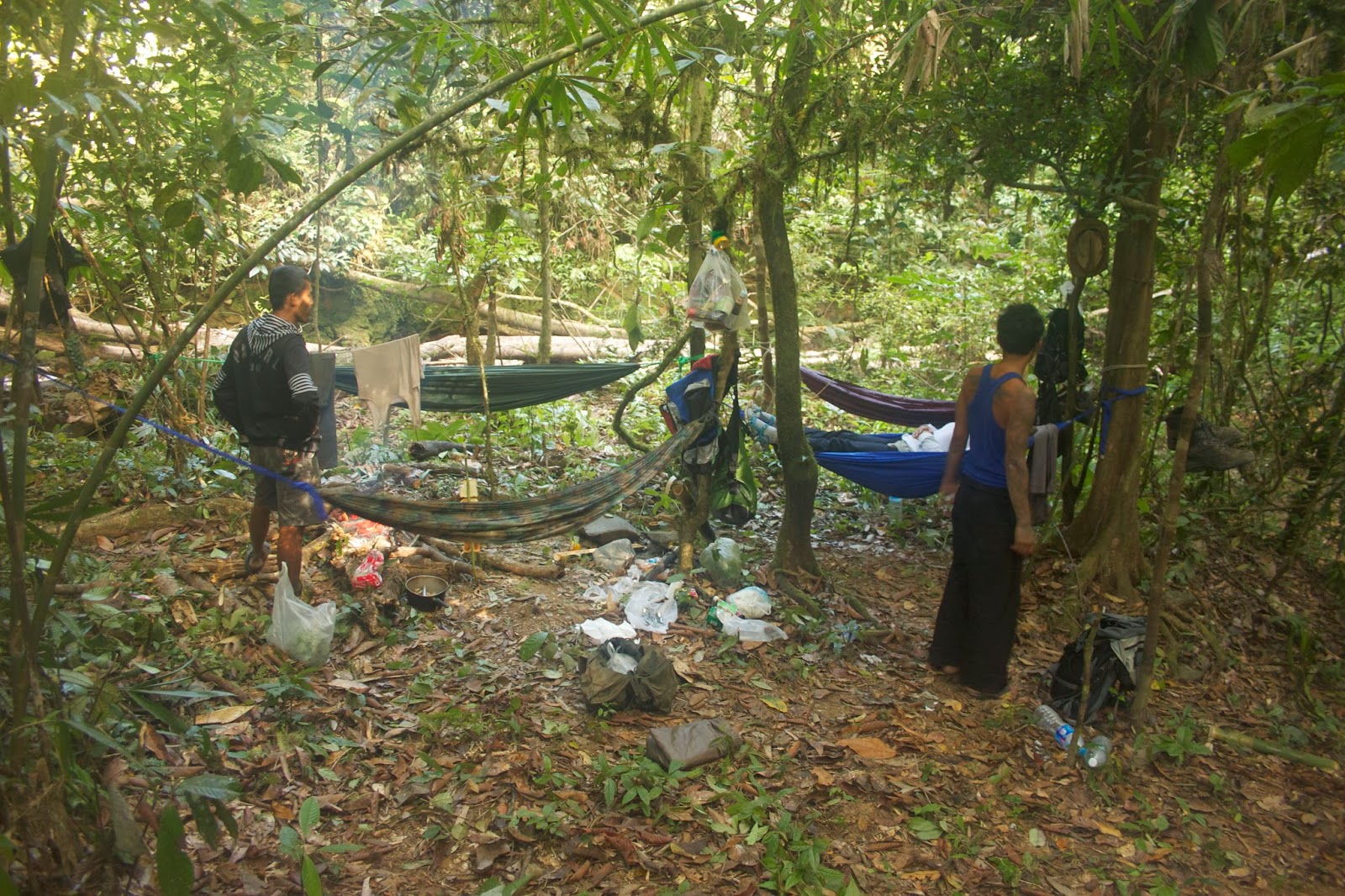 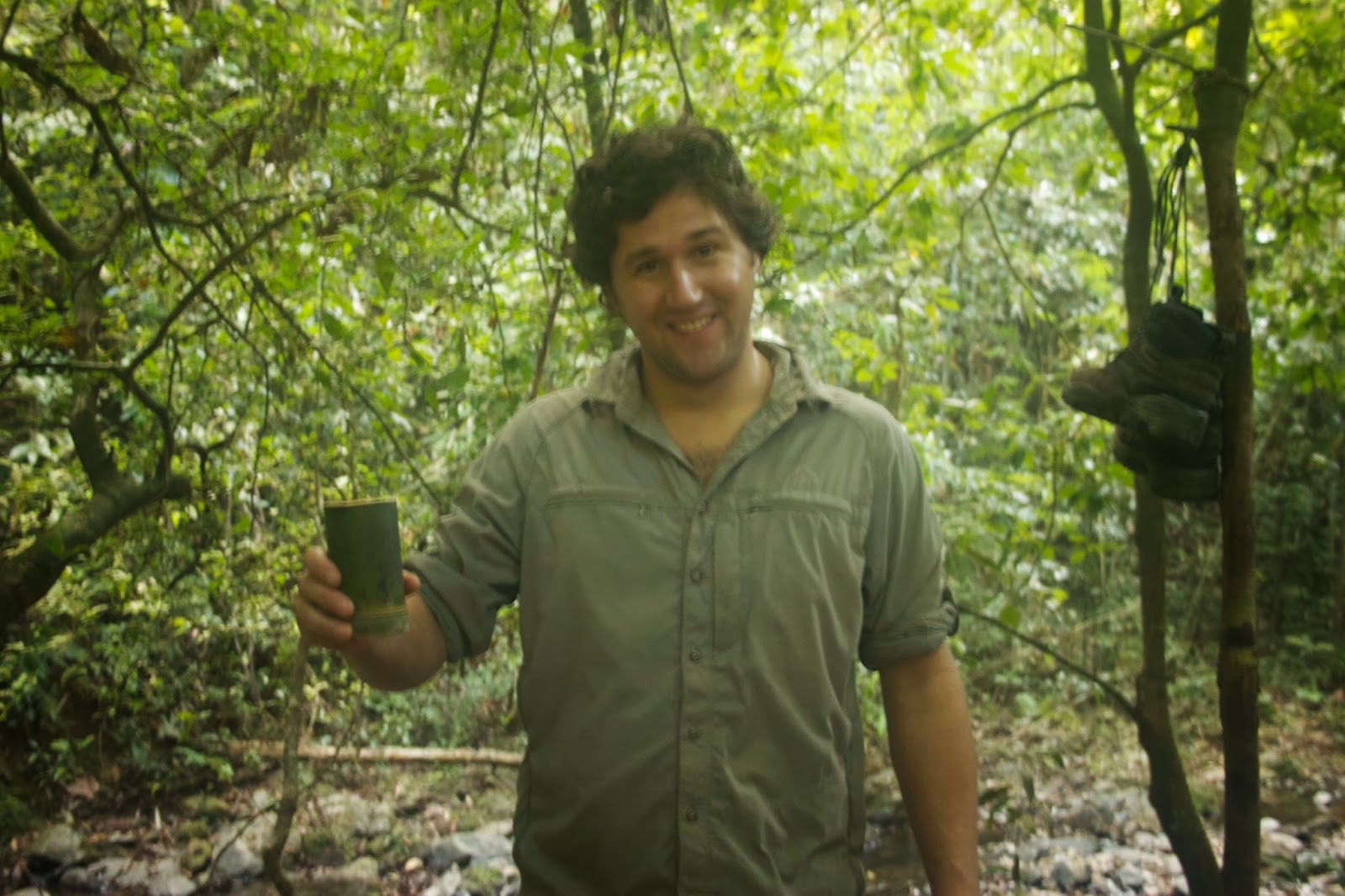 Eagle-eyed Sarah spotted a family of Elephant Moths, 2 adults and 15 babies, perfectly camouflaged against the moss and lichen of the tree trunk 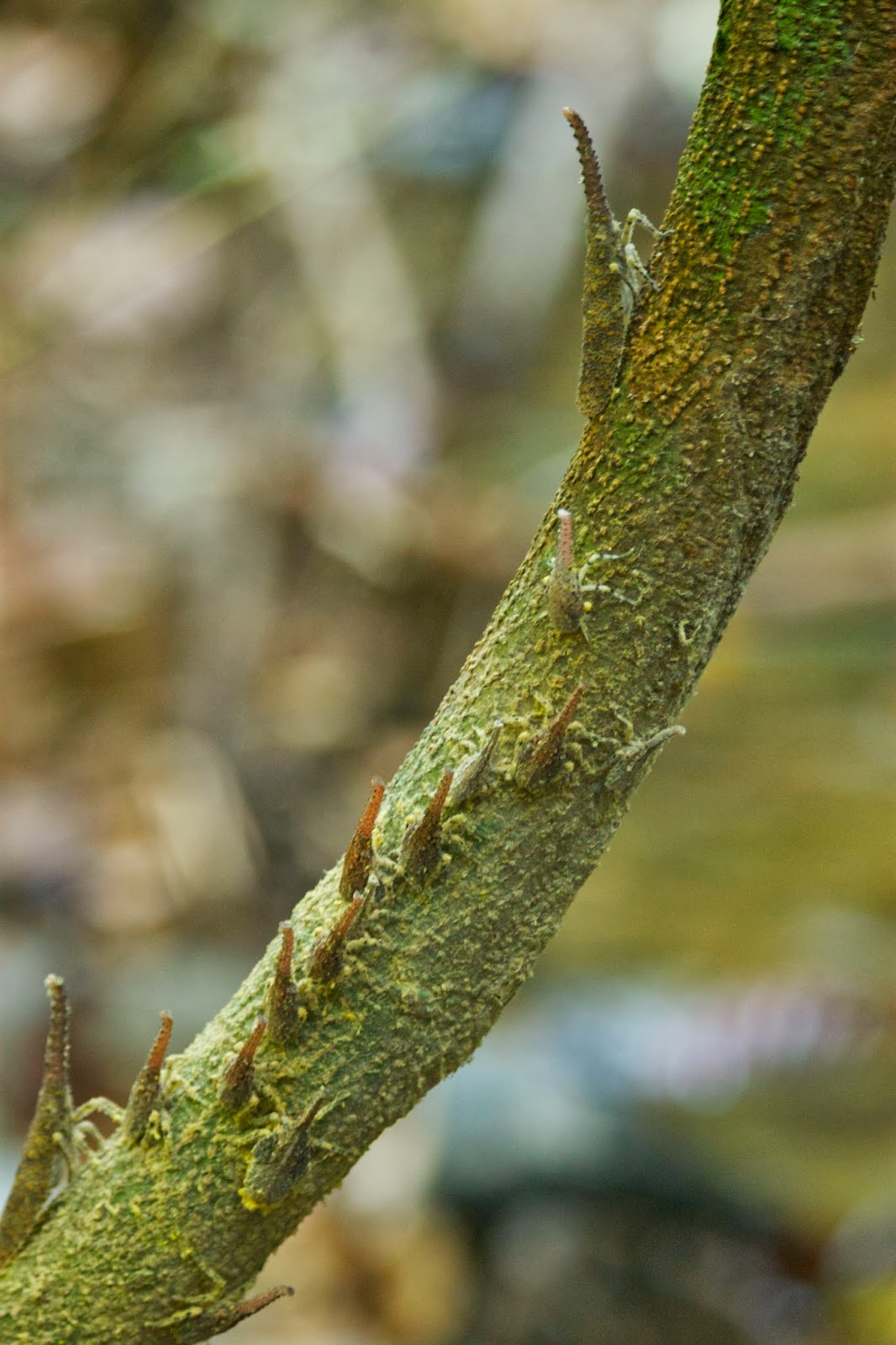 Sah forges his way up the steep valley sides 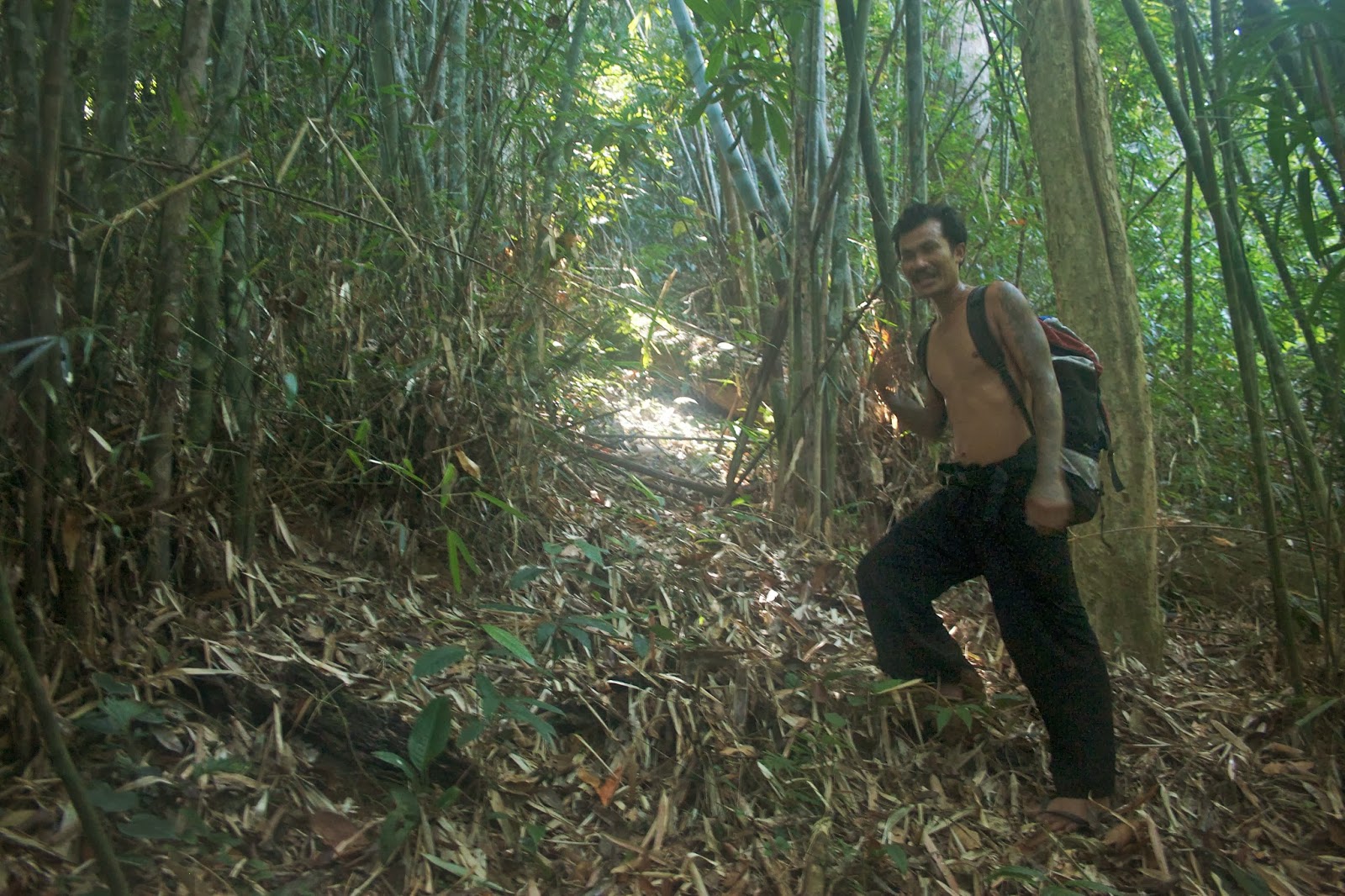 We trudge behind in his wake. Not much sunlight reaches the floor of the jungle, making photographing anything tricky business as the light is constantly changing.  It really makes you appreciate the quality of Attenborough's work. 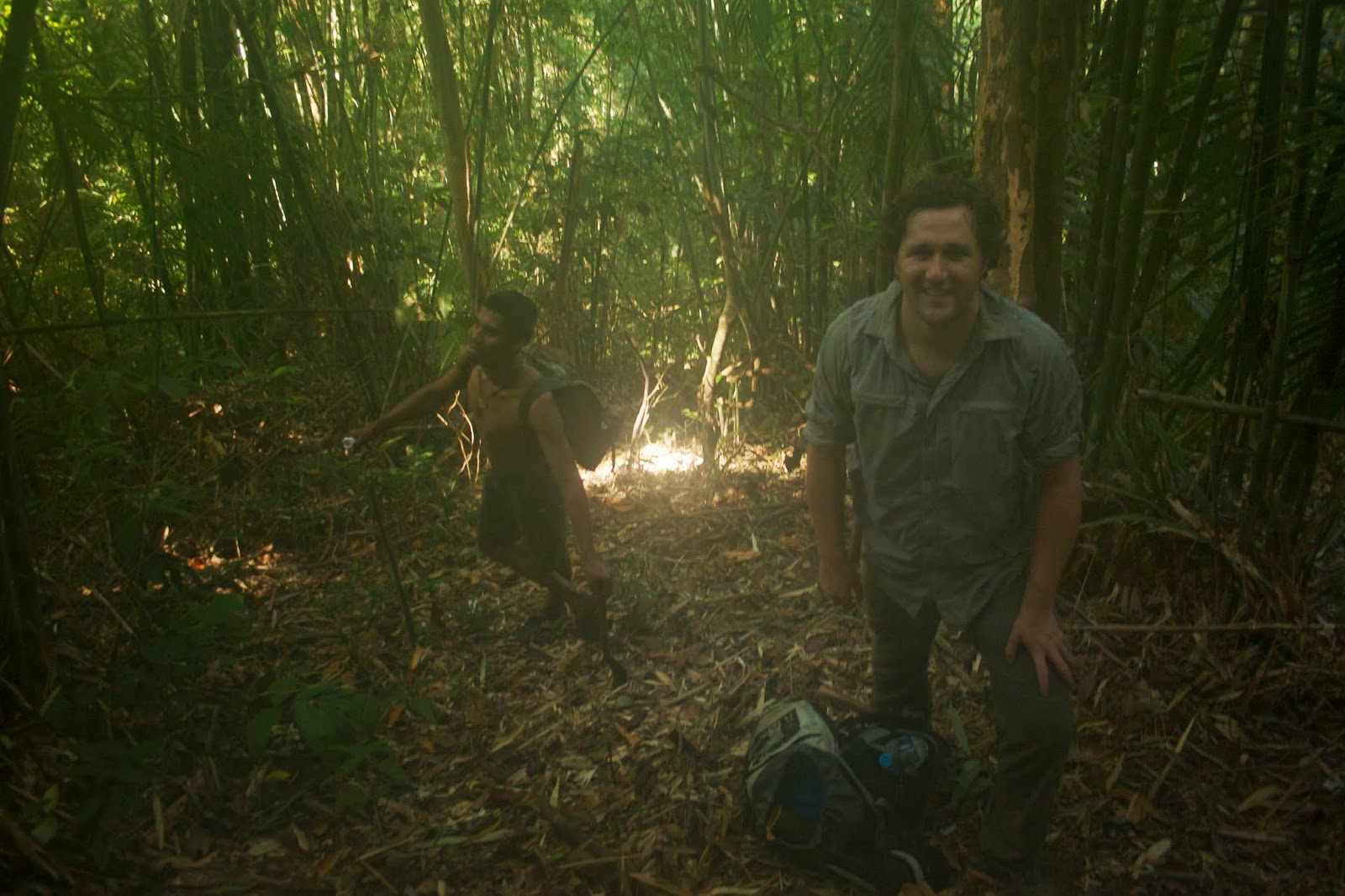 Hunting for signs of the old trail 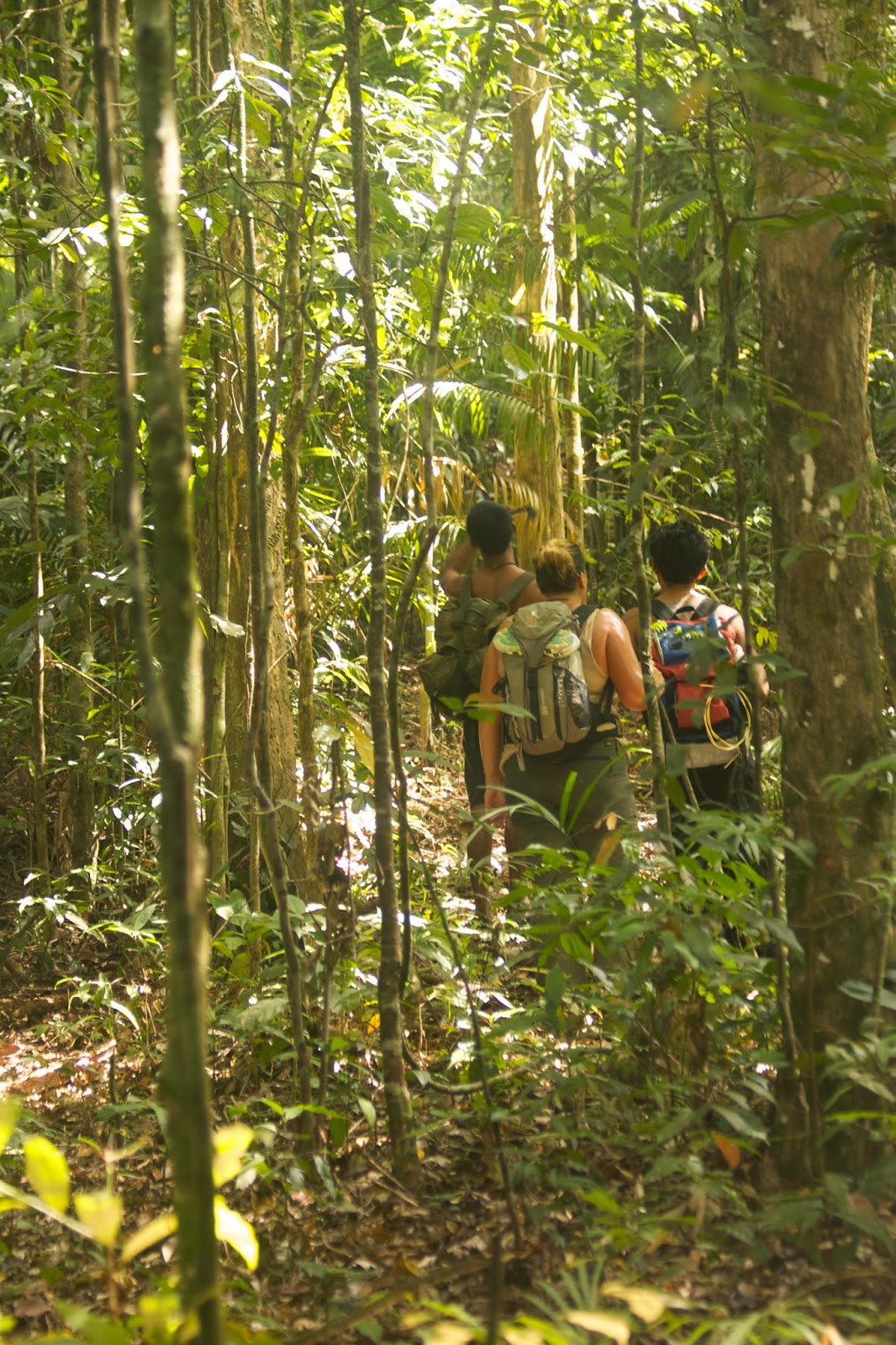 A cicada cask.  These amazing insects spend up to 15 years living underground maturing, then near the end of their life they burrow to the surface and climb up the nearest tree. Once at a safe height they dig their sharp legs into the bark and undergo a final transformation emerging as a winged cicada. They fly off into the canopy to find a mate as a final act. Their casing is left attached to the tree, if you look closely you can see the split down the middle of their back.  The cicada calls can be heard all day and night in the jungle, this is the male calling for a mate. 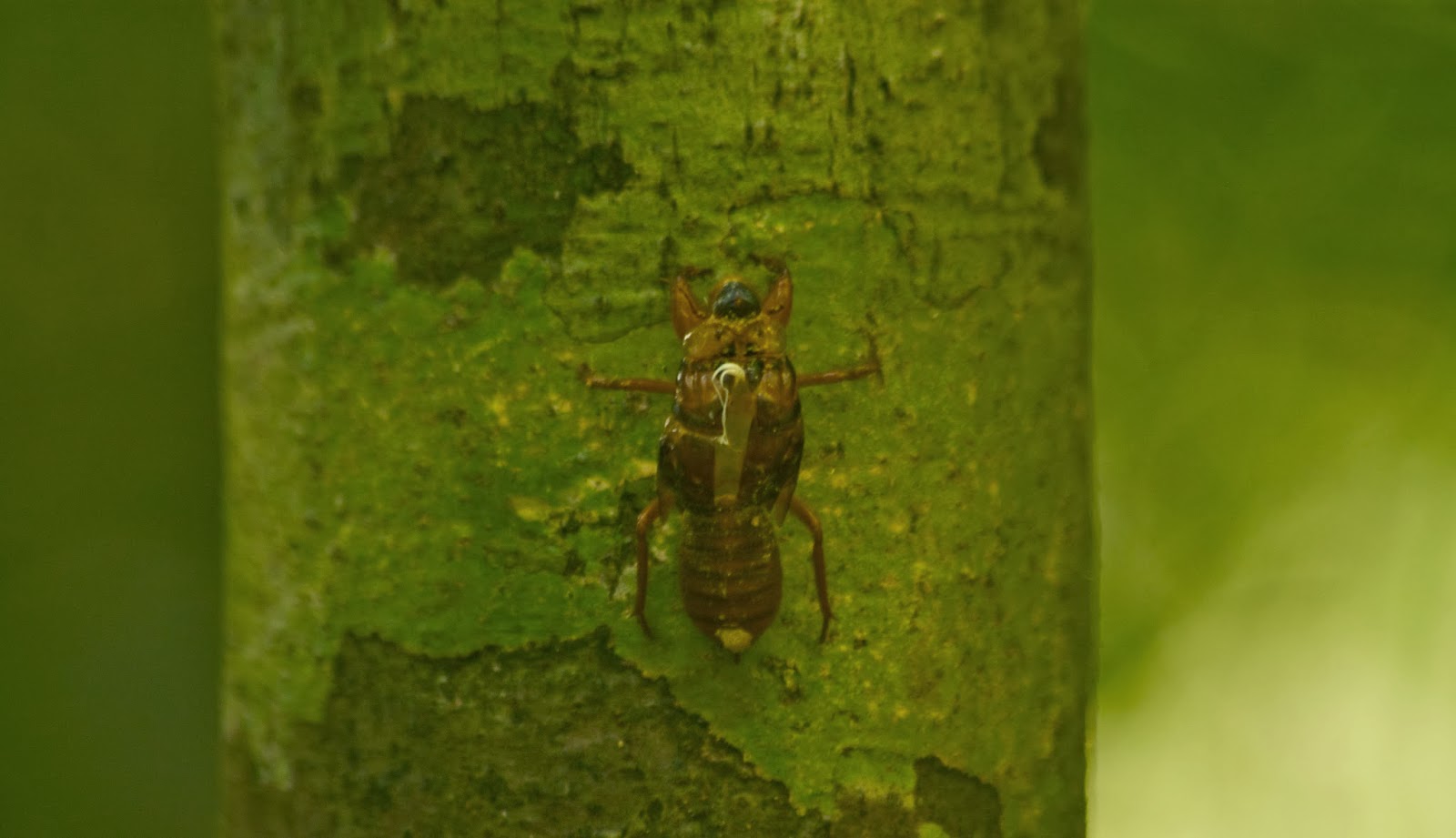 Everything here has spikes or stings or causes rashes, this innocent looking palm leaf when looked at closely in the right light is covered in barbed spiky hairs - ouch! 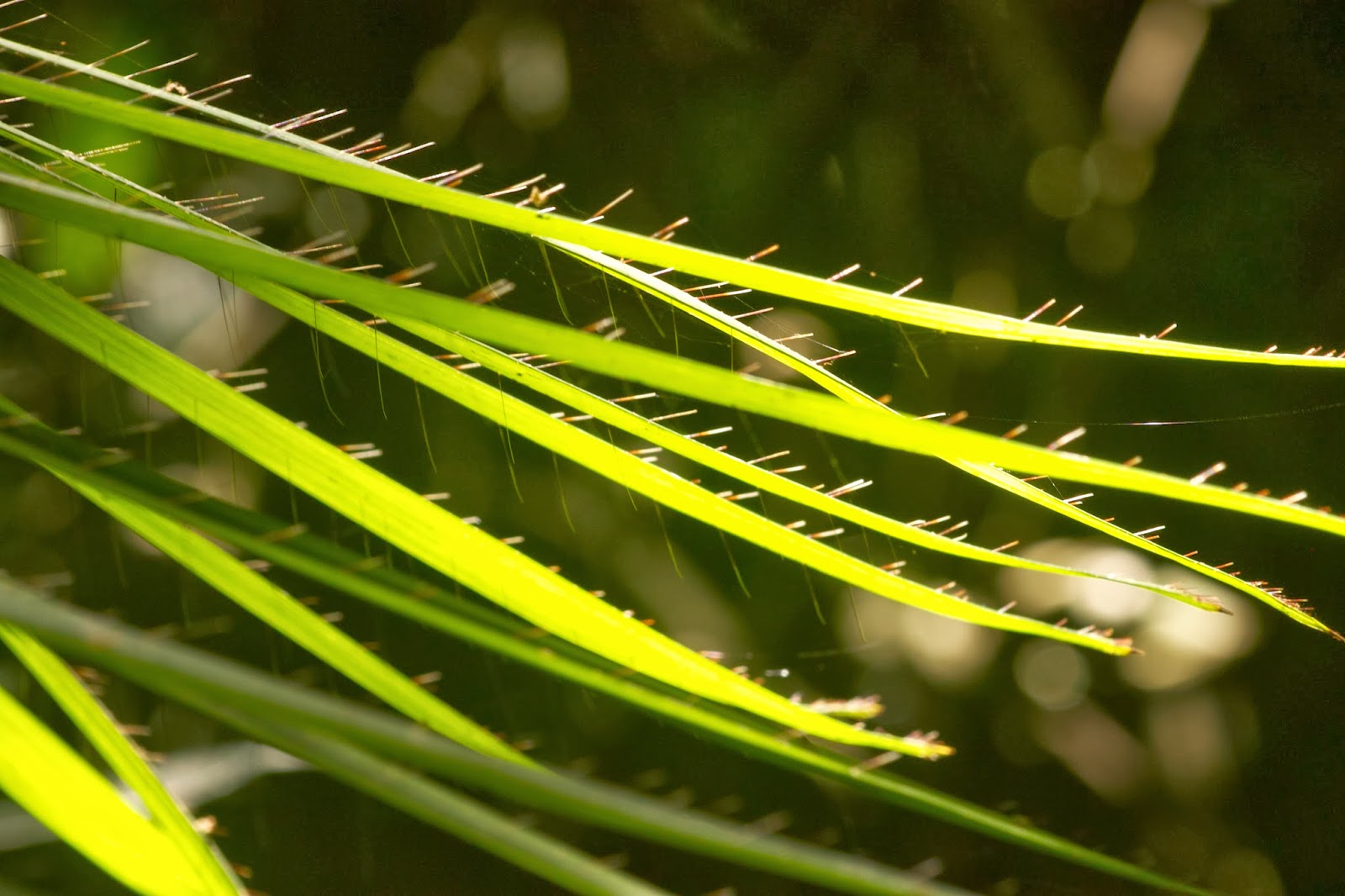 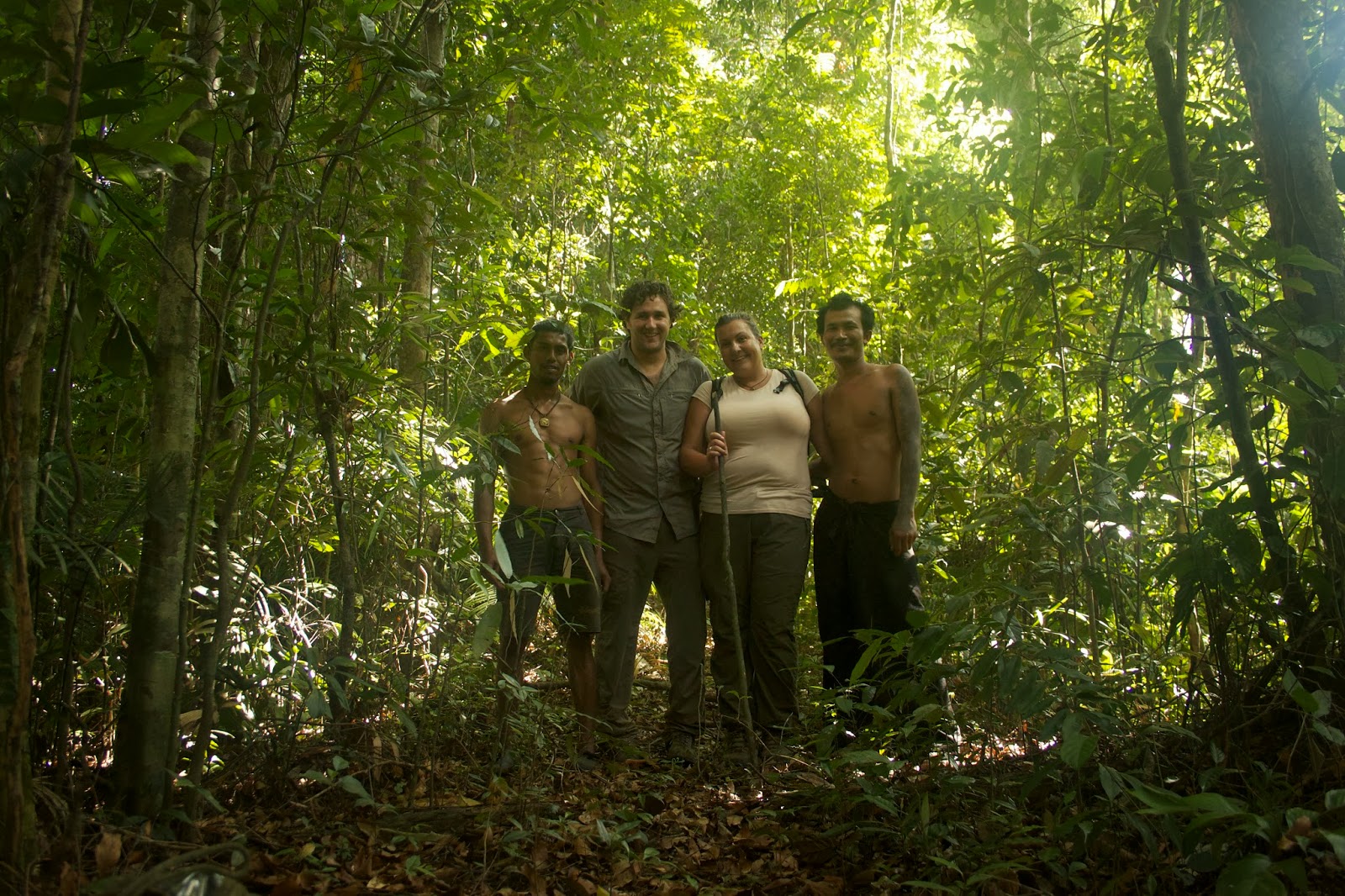 Play spot the Sarah! I'm only 10 or 20 metres behind in these 2 pictures - can you see the trail? 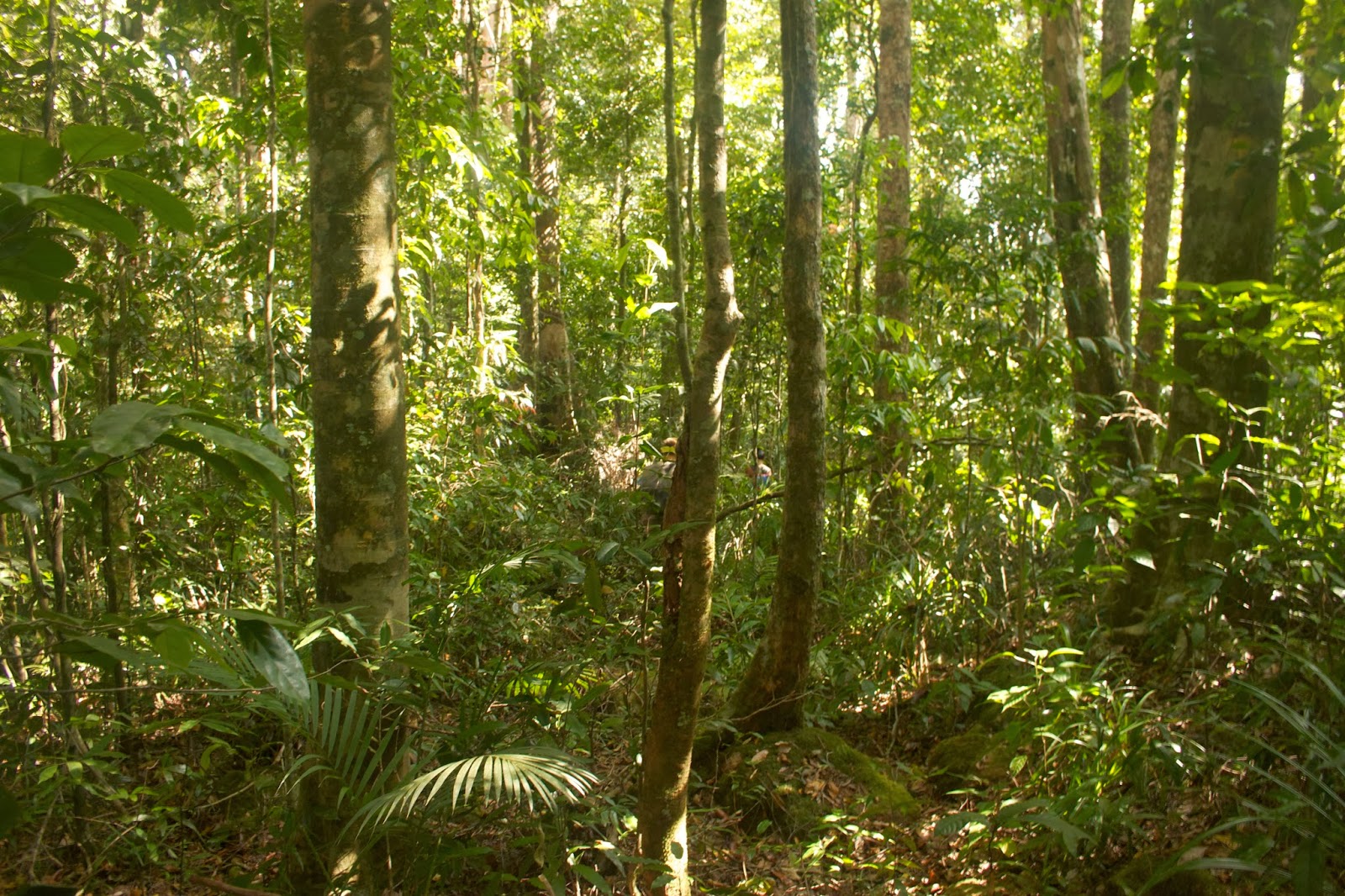 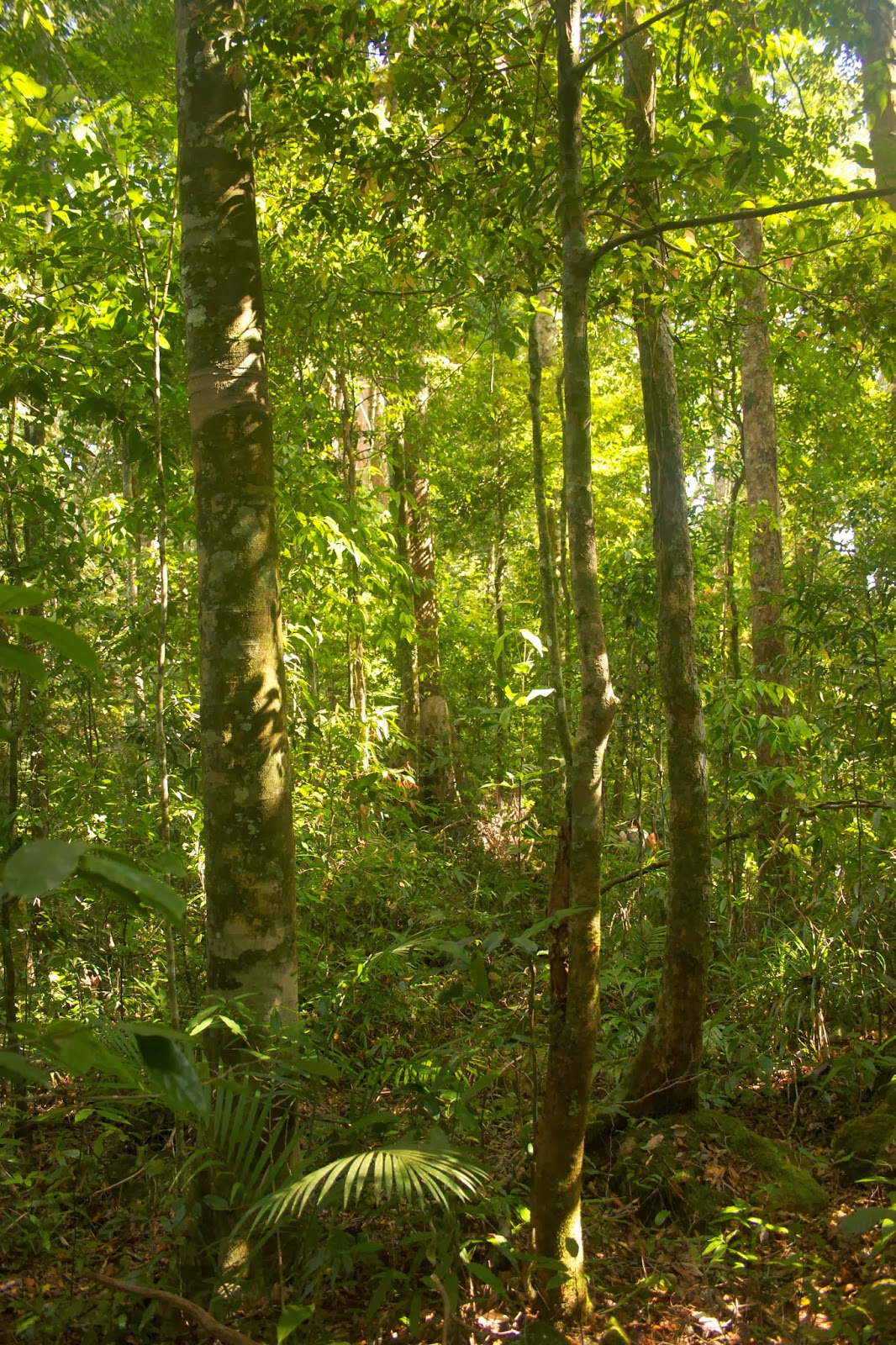 A 'Monkey Ladder Liana" twisting its way through the tree tops 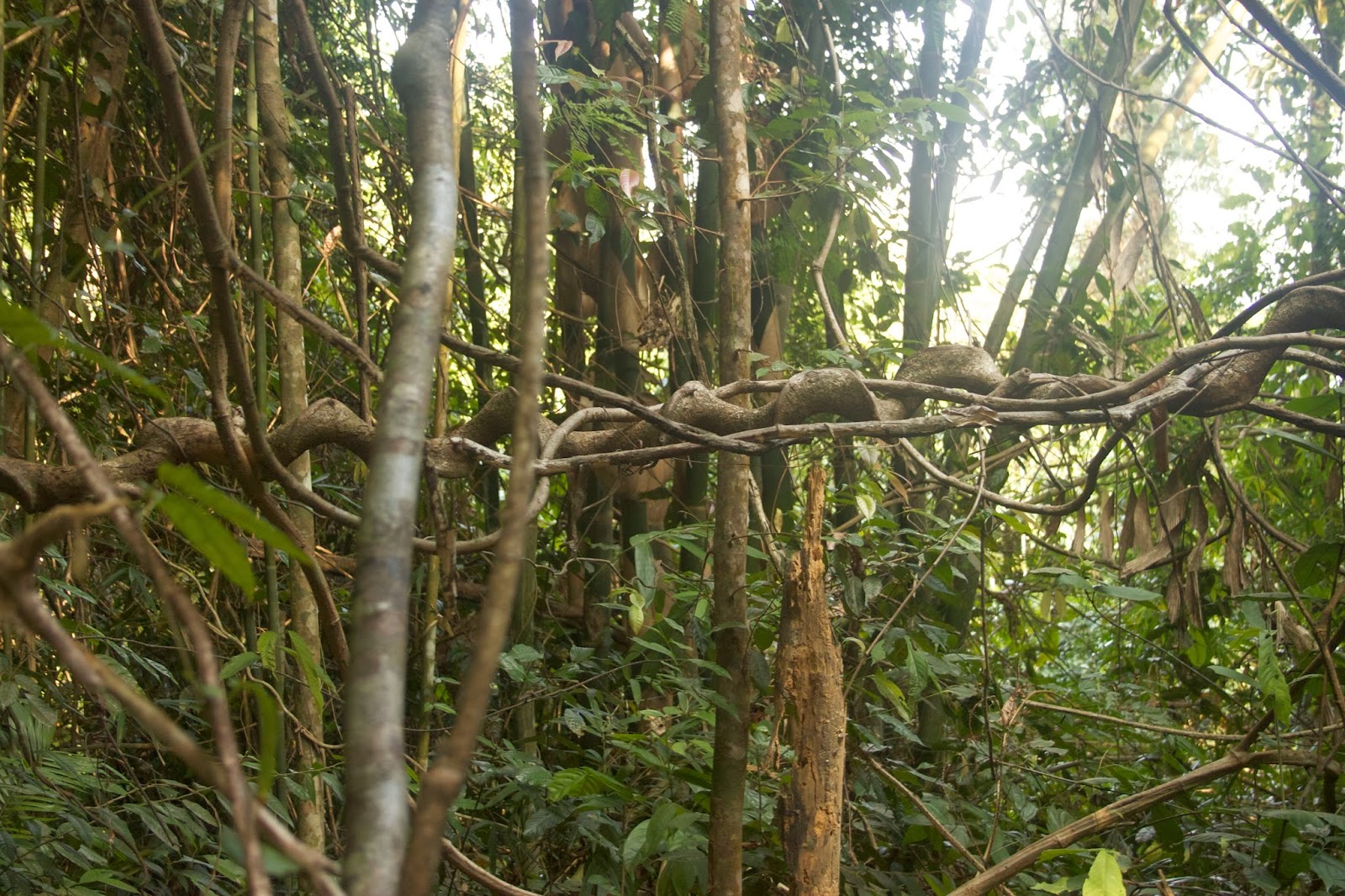 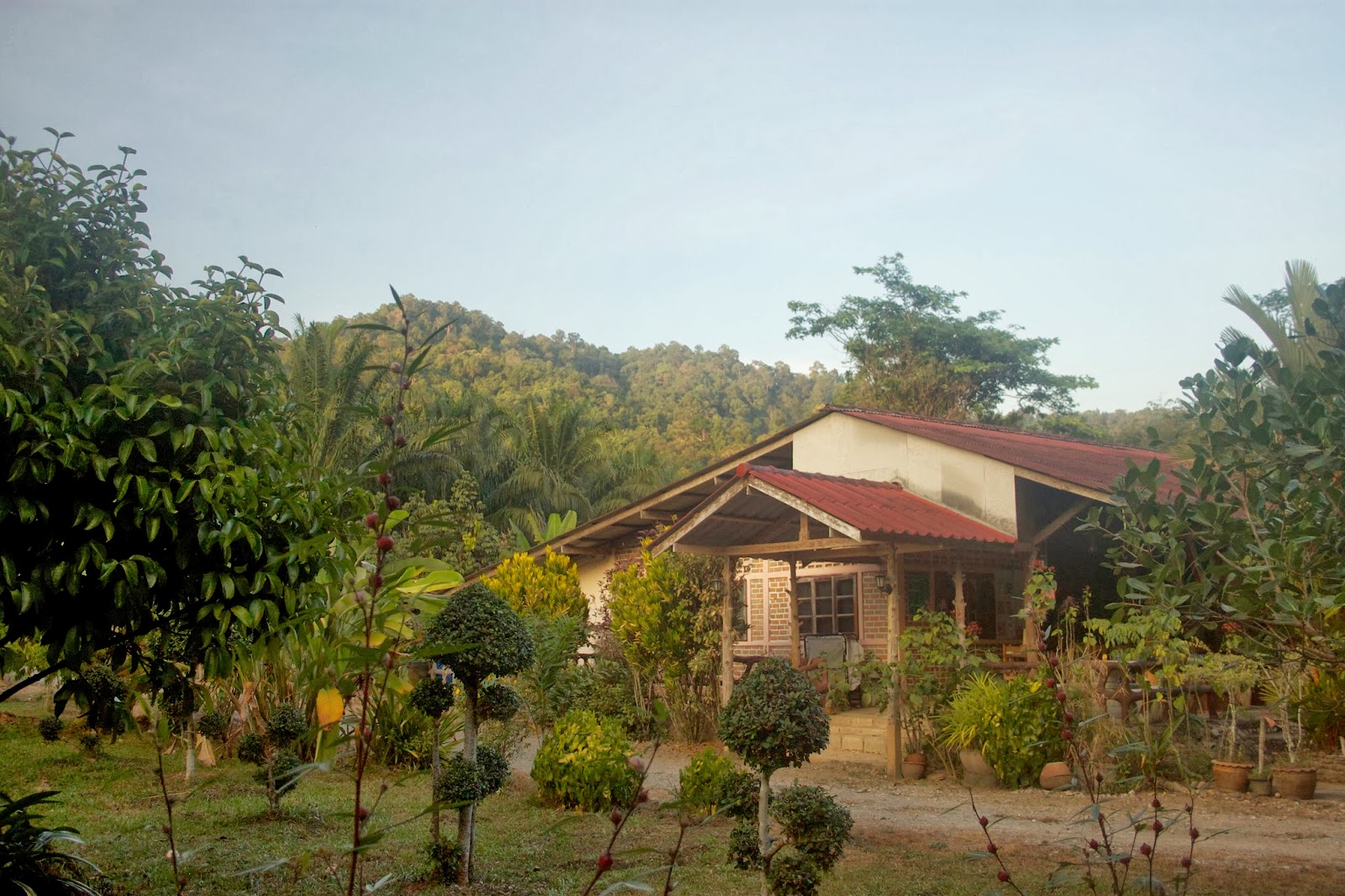